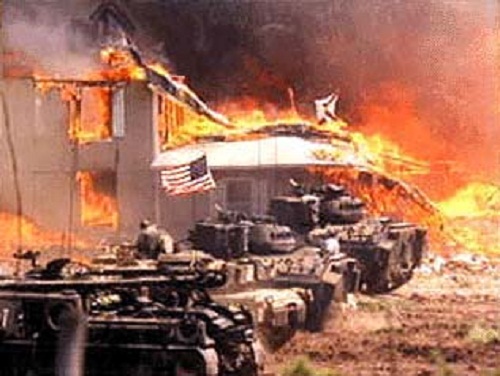 It looks like somebody is going to have to update the Waco Siege page on Wikipedia. Apparently the whitewashed history that former President Bill Clinton would like us to believe regarding the 1993 federal assault on the Branch Davidian compound in Waco, Texas, is missing important details regarding his own personal involvement.

In response to Bill Clinton’s highly publicized linking of the Tea Party movement to the 1995 Oklahoma City bombing in an op-ed piece for the New York Times, former Clinton adviser Dick Morris disclosed on Monday that it was Clinton himself, and not Attorney General Janet Reno, as Americans have been led to believe for the past 17 years, who called the shots during the 1993 botched invasion that led to the death of seventy-six people.

Speaking on the Hannity program on the Fox News Network, Morris criticized Clinton for his Oklahoma City comments: “Let’s understand what was Timothy McVeigh’s motivation …he himself had said that it was the reaction to the Waco takeover. Bill Clinton orchestrated that takeover.”

Morris went on to say, “Clinton in fact was so ashamed about what he did in Waco that he was not going to appoint Janet Reno to a second four-year term. She told him in a meeting right before the inauguration day … ‘If you don’t appoint me I’m going to tell the truth about Waco.’ And that forced Clinton’s hand … It’s never been said (publicly) before.”

For years, Clinton has been criticized for his leadership of the federal government during the Waco crisis, but he has managed to escape personal responsibility for the tragedy. With Morris’s statements, it appears this may no longer be possible. It would seem that Clinton was far more intimately involved with the government response at Waco than previously reported.

While there may be a link between Clinton and the Oklahoma City bombing, I would hardly blame the actions of a psychopath on any one individual or political party.

However, for Clinton to associate such a horrible act of violence with freedom loving Americans, especially given the fact that he must be fully aware that it was his decisions that led to the Waco catastrophe which in turn inspired Timothy McVeigh, is remarkably shameless.

Fred Dardick is the owner and operator of a medical staffing company based in Chicago. Prior to the business world, he worked as a biological researcher at Northwestern University and The University of Chicago. He has BS and MS degrees in biology and maintains a blog at conservativespotlight.com.

Fred can be reached at: [email protected]

The Truth about the Kennedy Assassination & Obama Told by Gadaffi

Did the Dimona Dozen murder the Fukushima 50?