FBI Supplied the Anarchist “Terrorists” Arrested in May Day Plot

As the Occupy movement carries out massive May Day protests around the country, the FBI Joint Terrorism Task force is trumpeting the arrest of “self-proclaimed anarchists” and “terrorists” who allegedly conspired to destroy a bridge in Ohio. Integral to the development and advancement of this plot, however, were FBI agents themselves and an informant with a drug and robbery record.

Douglas L. Wright, 26; Brandon L. Baxter, 20; and Anthony Hayne, 35, Connor C. Stevens, 20, and Joshua S. Stafford, 23, were arrested by the FBI on April 30, just in time to make the announcement as the nation turns its attention to May Day protests.

The affidavit reveals a plot by the FBI that continues a pattern of behavior in “terrorism” investigations against political activists. Most importantly, undercover FBI agents helped shape the “plot,” offered advice on how and where to use explosives, and allegedly sold explosives to the activists.

Pervasive Use of Informants and Undercover FBI

The informant in the case has been working with the FBI since July 20, 2011, and has a criminal record including possession of cocaine, conviction for robbery, and four convictions for passing bad checks. (The FBI’s proclivity for using down-and-out criminals was a key issue in the “Operation Backfire” Earth Liberation Front cases. The lead arsonist and informant, Jacob Ferguson, had a heroin addiction, and is now back in prison on drug charges). 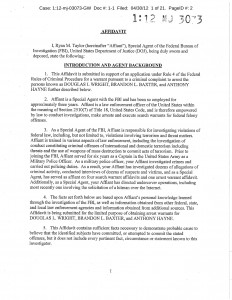 The informant and the others haphazardly talked about various plans, starting with the use of smoke grenades and destroying bank signs off the top of large buildings.

For instance, on April 10, 2012: ““…BAXTER explained that he does not know what to do with the explosives and he has never considered blowing anything up before.”

Conversation shifted to other outrageous plans. According to the affidavit, “WRIGHT joked that he would wear a suicide vest and walk in and blow himself up, but advised he would have to be very drunk.”

The defendants flitted between hyperbolic conversations -– some about destroying bank signs, some about destroying a boat, some about a bridge — and various spy tactics such as secret email accounts, wiping computer drives, and disrupting surveillance. At every step of the way, the informant (who was paid nearly $6,000, plus expenses) and undercover FBI agents were there to correct course.

At one point Wright asked the undercover FBI agent “if there was any work he could do… to pay for the items he was going to purchase” from the agent. Later, Connor Stevens told Wright that he no longer wanted to be part of the plan, but wanted to know if the informant might hire him to do some work on his house.

At another point, Wright told the informant that he and others thought one of the individuals involved was an undercover cop (which he was). To allay his fears, the informant said he would help provide the explosives.

U.S. Attorney Dettelbach called this a violent terrorist plot, and said: “The defendants stand charged based not upon any words or beliefs they might espouse, but based upon their own plans and actions.”

What’s troubling is that the government has had a heavy hand in creating the very plot it thwarted.

And on top of that, the defendants, by the admission of the FBI, said repeatedly that they had no intention of harming anyone. At one point Baxter and Wright “stated they don’t want people to think they are terrorists.”

This isn’t an isolated instance.

The criminal complaint reads like the spitting image of the case of Eric McDavid, who was coaxed  by an undercover FBI operative named “Anna.” In that case, like this one, the FBI supplied bomb making recipes, bomb making materials, and attempts to distill activist boasting and hyperbole into a coherent plan.

McDavid did nothing, and was arrested on conspiracy charges, like these defendants have been. As readers of this site know, conspiracy charges are the fall-back for the government when there is not enough evidence to get anything else to “stick.”

In addition to a continuation of undercover informants and FBI-manufactured plots, this case also reflects on on-going focus on demonizing anarchists.

The government’s press release proclaims that the defendants are “self-proclaimed anarchists.” The affidavit notes that they attended anarchist protests and carried anarchist flags.

The affidavit also says that the defendants talked about anarchists “rioting and destroying each city” that holds May Day protests, and that it will be “off the hook.”

Demonizing anarchists has gone one for over a century, of course, but in recent years the rhetoric has dovetailed with “War on Terrorism” hysteria.

For example, in Scott Demuth’s case, the government argued that: “Defendant’s writings, literature, and conduct suggest that he is an anarchist and associated with the ALF movement. Therefore, he is a domestic terrorist.”

In another case, the government sought a high cash bond against environmentalist Hugh Farrell because “the defendant has been observed advocating literature and materials which advocate anarchy.”

It should come as no surprise, then, that the announcement of these arrests was carefully unveiled yesterday, so that the top news story this May Day would not be about how anarchists are preventing home foreclosures, starting community gardens, teaching collective organizing skills, and re-framing class consciousness, but about how they were part of an FBI-guided “terrorist plot.”