How to Beat Facial Recognition & the Surveillance State 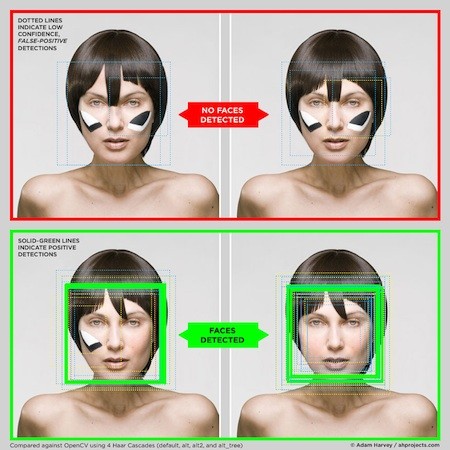 Big Brother is watching you, though probably not in the ways most of us would imagine.

Sure, the cameras at banks or airport checkpoints may be on the lookout for robbers or would-be terrorists, using facial recognition technology to match pictures to existing ones. But private enterprise is busy as well.

If you tag a picture of yourself on Facebook or Google’s Picasa, that image can be used to identify you in other pictures.

Adam Harvey says the technology is intruding on your right to privacy, and he’s figured out some low-tech ways to outsmart them.

“Don’t ask me about privacy, because I tend to talk too long about it,” he said. “When we live in an environment where we’re constantly being monitored, we cherish the right just to talk to someone face-to-face.”

Harvey, a New York web designer, started a project called CV Dazzle when he was getting his master’s degree at New York University in 2010. His objective: to show people how to hide in plain sight.

If you look at the images he generated, you’ll get a sense of what he has in mind. Face-recognition software looks for key points on one’s face, such as eyes, nose, and mouth, and where they meet and the distance between them. So he suggests simple ways to block them.

A spike of hair proved to be effective if it covered the area where the eyes, forehead and nose come together. Computer-vision software often looks for that spot, said Harvey, and will not detect a face without it.

Similarly, he said, a bit of face paint will confuse a computer. Harvey said he found that black geometric shapes, painted on one’s cheeks, would prevent a machine from registering that it was looking at a face.

Of course, these are not things that most people would do to their faces — but Harvey joked that in New York, where he lives, people with eccentric hairdos or makeup wouldn’t stand out much. And they’re more effective than hoodies or baseball caps pulled over one’s face. In those cases the software is unnecessary; people simply look as if they have something to hide.

Of course, the issue of privacy is complicated, especially when you’re talking about privacy in a public place. Richard Falkenrath, a principal with the Chertoff Group of security consultants who was an advisor on homeland security in the Bush administration, said facial recognition is not widely used in the United States except at places like security checkpoints. He looked at Adam Harvey’s work and said it would be most useful in social media, not as a way to get around government security.

“There are clearly certain activities for which you have no reasonable expectation of privacy,” Falkenrath said. “When you take out the garbage, people see you. When you walk down the street, people can take pictures of you.”

Would work like Harvey’s be helpful to criminals — the very people who ought not to be able to hide? Falkenrath said he didn’t think so, and Harvey said he did not intend it that way.

“This project is not about dodging the law, it’s about adapting to living in surveillance societies,” he said.

“In the next decade we’ll have to figure out how to balance security with privacy and move on,” Harvey said. “The research I’m doing is aimed at integrating fashion, privacy and technology to make real products that people can use.”

404 FREEDOM NOT FOUND – Message From Anonymous