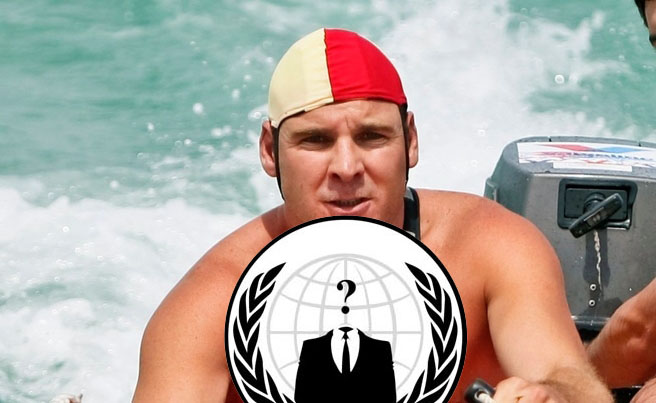 Everybody who has known Adam ‘Lorax’ Bennett aka Adam Bennett Anon knows he’s an awesome anon. Furthermore, the article now let us know he was also involved in his local community as an experienced life saver and a fundraising manager for Cancer Support. This kind of person doesn’t belong in jail! He belong to it’s people. The people he give each day of is life to protect.

If you’ve know Lorax, or Adam John Bennett, now is the time to get involved and help!

Read the #FreeAnons press Releases : We are All Lorax
Read tweets and tweet with the #FreeLorax hash tag
Read this PasteBin
Keep posted for more information!

Articles about the arrest

Was The Lorax Setup?

The lifesaving Lorax’s tale took an interesting turn the last few nights, as the internets and ircs were ablaze with controversy, flame wars, and a little good-ole-fashioned ‘he-said she-said.’ What was already looking like a classic tale of governmental overreach and the suppression of Adam John Bennett’s Civil-Rights is turning into a dark tale of deception, duplicity, and police-led treachery. While there was much argument among the anons present, one thing was very clear, the Australian government had tricked and deceived a minor in an unsuccessful attempt to lure the Lorax into a hacking scheme. Having failed in that they have continued to attempt to argue that the research work that he did at his job for a Cancer fighting charity that showed a clear problem with the same security protocol that the Australian Government was proposing using with it’s upcoming, Telecommunications (Interception and Access) Amendment (Data Retention) Bill 2014, plan for telecoms to keep their customer’s e-mail and phone metadata for two years.

Soon after Bennett began criticizing the plan there was an alleged hack into AATP (third-largest telecom in Australia) and the Indonesian government, Anonymous was blamed. The Government initially charged the Lorax and two hackers with the breach. After nearly a year of delays and continuations, the court announced that all of the charges for hacking by Bennett would be dropped, but replaced with obscure sounding charges like, “aiding and harassment.” It has become ever more clear that there wasn’t ever much of a case and the government is using Bennett’s bail restrictions to keep his LoraxLive show off of the air.

This dark tale really begins in 2011, even before the government started suggesting an ill-conceived data retention scheme, before anyone hacked AATP and the Indonesian government. Back in the heyday of lulzsec a 15 year-old hacker who we’ll call Hacker-Z (not his real hacker handle) was caught up in the glamour and prestige of the lulzsec-style direct-action hacking. Hacker-Z was like almost nearly ever teenage boy he wanted to listen to loud music and raise a little hell. That sounds anti-social perhaps, but when you see that the things that young hacktivists want to break are things like evil autocratic governments like Libya or Tunisia, or on-line bullying groups, that anti-social streak can begin to turn an odd shade of heroic on a young person. Apparently, according to general consent, it wasn’t hard for the same sort of Five Eyes investigators–who were at that same time acting as the nefarious Sabu’s puppet masters, in a separate scheme to entrap Anons–to get a hold of this inspired, if naive teenager.

Having entrapped the would-be activist with an illegal hacking scheme, they first terrified the lad and his mother with the prospect of nearly life in prison for his unsuccessful attempt, while being directed by undercover government agents, to hack government and military websites; according to some in the chatroom. Having scared his mother as best they could it was easy for the police to convince her to give consent for them to use their son as a mole to keep an eye on on-line hacktivists. Any mother if, confronted with the prospect of sending her only child to prison, for probably, the rest of his life would almost surely make the same decision. Having Hacker-Z as a mole worked well for the police apparently, he was generally reported to be a friendly, helpful, and affable young man. No one on this side of things is sure how much information he really got in his few years, probably, working for the police, but needless to say when he was arrested with the Lorax, many a hard drive was wiped, just in case.

It seems the feds kept Hacker-Z on ice until the day they needed him. That day came, apparently, during the summer of 2012, when the Australian Government first proposed the current anti-privacy legislation that they are quietly pushing through the legislature right now. When The Lorax caught wind of the Government’s plan he immediately saw the obvious problems with warehousing the entire Australian population’s personal web data. Even if the government could show an actual need for all of this personal, which they can’t, Bennett honed in on the first and most obvious problem, security. Eventually Bennett showed, at his workplace, while testing their server, that recent flaws found in OpenSSL, the so called “Heartbleed Bug” could eventually lead to losses of citizen’s personal data to criminals or terrorists, if the government continued with their data retention plan.

Seeing the problem the Lorax did what the Lorax does when the community is in danger; he warned people through his popular show, Lorax Live, whose archives, that haven’t been seized by the government, can be heard here and here. Obviously, the leaders and politicians backed by corporatism and fully vested in the telecom industry, couldn’t afford to have a lot people aware of or critical of their massive transfer of both citizen’s data and the nation’s wealth, in the form of fees paid by taxes, to the nation’s telecoms. No, classically, power becomes annoyed when confronted by truth, this story is no different.

By the Winter of 2012, as far as the Australian government and the Australian Federal Police were concerned; the Lorax had to be silenced. Later when they learned that, while at his job testing his employer’s server’s security, Bennett had discovered a way that the “Heartbleed Bug” might be used to access encrypted files on a server, the very sort of thing that privacy advocates had been screaming about ever since the government first suggested the data retention program, government agents hatched a plan to silence the Lorax.

The police knew that they would never convince a reputable, white-hat security researcher like Adam John Bennett to participate in a criminal attack on the internet’s infrastructure. It is rumored that the police devised a plan to implicate the Lorax without needing him to take part in any illegal activity. To do this, they gathered up their friendly young, unfortunate mole, Hacker-Z and sent him into an irc chat with the Lorax and had him plead with Bennett to give him, Hacker-Z, Bennett’s note’s from his research work on OpenSSL. The authorities, it seems, hoped that by obtaining information on how one might be able to attack encryption from the researcher they could implicate him in a crime and, at least, keep his radio show off the Internet until they got their data retention plans passed into law.

Perhaps more despicable than the government’s attempt frame and implicate a man are its motives, of depriving a citizen of his civil-rights, and its methods of abusing the criminal justice system through the attempted entrapment of an innocent man, and misuse of a citizen’s right to bail in order to silence a benign, but vocal critic of governmental corruption and malfeasance. This is not Syria or Zimbabwe where a critic can simply be tossed in a hole or executed by despots, in “free” societies, like Australia, you must design administrative and judicial straps with which to bind their tongues and hands to things like restrictive bail requirements or plea agreements, to trumped up or false charges. The critic is silenced, the powers-that-be have no blood on their hands, the media calls the former hero-of-the-people a villain, and whatever danger the critic was fighting against is forgotten. It’s all very civilized.

If the police were unaware of who they were dealing with or simply unfamiliar with the world of white-hats is unclear. Bennett did not give their mole any help or information, and not because he believed he was a mole. (As a white-hat researcher Bennett was well aware of cyber-crime and the need for enforcement in the field, it can assuredly be assumed then that he supports law-enforcement and legitimate undercover operations, but any thinking adult would have to wonder about the wisdom of using children as moles to bait and entrap adult criminals.) No, it is rumored that Bennett refused to help the boy, not because he believed he was working with police, rather he believed that the youth might be an impassioned young hacktivist who could possibly do something unwise or damaging with the information, something that might hurt others as well as get the lad in trouble with the law. Most likely, in Bennett’s mind, the young Hacker-Z would be better off waiting until the bugs in OpenSSL were fixed to get a look at the Lorax’s research notes.

Blown off course, but not sunk by the Adam John Bennett’s integrity, the Australian Government tried a new, indirect tack to get their entrapment scheme back on course. They would have Hacker-Z engage an intermediary, another White Hat researcher, someone the Lorax would trust. They found him in a passionate young researcher we’ll call Hacker-X. Hacker-X was known as a knowledgeable and helpful security expert. He had long been very helpful getting newbloods on the right track on-line and helping others secure their computer systems. Like a lot of hacker culture Hacker-X believes in education and the open-sharing of information, not to cause damage but to protect from damage.

Imagine you bought a lock for your front door, it’s a common lock, and there are many like it in your neighborhood. If there was a flaw in that lock that could allow criminals to enter your home then you would like to know about it, wouldn’t you? Of course you would, and it would be good for you to know so you could find a way to fix it or replace it, so the burglars can’t come in. Certainly, you wouldn’t want burglars to know about the flaw, but luckily the vast majority of humans aren’t burglars, likewise very few people interested in computer security are criminals. So, for a researcher such as Hacker-X to want to share something that could easily be used to help secure a network, is understandable and legal. It’s not clear if he already had possession of the notes from Lorax’s research into OpenSSL, or if he actually obtained them on behalf of Hacker-Z, regardless, sharing information about a weakness in an encryption protocol is not illegal, as the Australian Government’s delays and recent charge droppings indicate.

Whether the police were directly involved in or only supervising the alleged hacks on AATP and the Indonesian government isn’t clear, but it has become very clear that they never had any evidence against Adam John Bennett, the Lorax. In an extraordinary judicial move they have dropped all of the charges against Bennett, but have come up with ten new charges that, they claim they will commit to at his next hearing in June. While on one hand it is great to think that the Lorax may end up getting the justice he deserves in a dismissal of all charges at his next hearing, what is maddening is the obvious and bald faced way in which the Australian Government is misusing the criminal justice system to keep him Bennett on the restrictive bail terms that prevent him from broadcasting his show, LoraxLive and his protest about the government’s data retention plan.