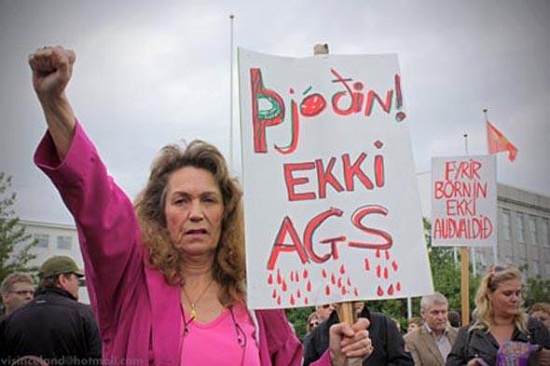 Since the 1900′s the vast majority of the American population has dreamed about saying “NO” to the Unconstitutional, corrupt, Rothschild/Rockefeller banking criminals, but no one has dared to do so. Why? If just half of our Nation, and the “1%”, who pay the majority of the taxes, just said NO MORE! Our Gov’t would literally change over night.

Why is it so hard, for some people to understand, that by simply NOT giving your money, to large Corporations, who then send jobs, Intellectual Property, etc. offshore and promote anti-Constitutional rights… You will accomplish more, than if you used violence. In other words… RESEARCH WHERE YOU ARE SENDING EVERY SINGLE PENNY!!! Is that so hard? The truth of the matter is… No other modern Nation on earth, except the Icelanders, have carried this out successfully. Not only have they been successful, at overthrowing the corrupt Gov’t, they’ve drafted a Constitution, that will stop this from happening ever again. That’s not the best part… The best part, is that they have arrested ALL Rothschild/Rockefeller banking puppets, responsible for the Country’s economic Chaos and meltdown. What does all this have to do with? The answer… AGENDA 21. If you’re not educated, about Agenda 21, please watch these short videos now: http://www.freedumbnation.com/?p=1130

Last week 9 people were arrested in London and Reykjavik for their possible responsibility for Iceland’s financial collapse in 2008, a deep crisis which developed into an unprecedented public reaction that is changing the country’s direction.

It has been a revolution without weapons in Iceland, the country that hosts the world’s oldest democracy (since 930), and whose citizens have managed to effect change by going on demonstrations and banging pots and pans. Why have the rest of the Western countries not even heard about it?

Pressure from Icelandic citizens’ has managed not only to bring down a government, but also begin the drafting of a new constitution (in process) and is seeking to put in jail those bankers responsible for the financial crisis in the country. As the saying goes, if you ask for things politely it is much easier to get them.

This quiet revolutionary process has its origins in 2008 when the Icelandic government decided to nationalise the three largest banks, Landsbanki, Kaupthing and Glitnir, whose clients were mainly British, and North and South American.

After the State took over, the official currency (krona) plummeted and the stock market suspended its activity after a 76% collapse. Iceland was becoming bankrupt and to save the situation, the International Monetary Fund (IMF) injected U.S. $ 2,100 million and the Nordic countries helped with another 2,500 million.

While banks and local and foreign authorities were desperately seeking economic solutions, the Icelandic people took to the streets and their persistent daily demonstrations outside parliament in Reykjavik prompted the resignation of the conservative Prime Minister Geir H. Haarde and his entire government.

Citizens demanded, in addition, to convene early elections, and they succeeded. In April a coalition government was elected, formed by the Social Democratic Alliance and the Left Green Movement, headed by a new Prime Minister, Jóhanna Sigurðardóttir.

Throughout 2009 the Icelandic economy continued to be in a precarious situation (at the end of the year the GDP had dropped by 7%) but, despite this, the Parliament proposed to repay the debt to Britain and the Netherlands with a payment of 3,500 million Euros, a sum to be paid every month by Icelandic families for 15 years at 5.5% interest.

The move sparked anger again in the Icelanders, who returned to the streets demanding that, at least, that decision was put to a referendum. Another big small victory for the street protests: in March 2010 that vote was held and an overwhelming 93% of the population refused to repay the debt, at least with those conditions.

This forced the creditors to rethink the deal and improve it, offering 3% interest and payment over 37 years. Not even that was enough. The current president, on seeing that Parliament approved the agreement by a narrow margin, decided last month not to approve it and to call on the Icelandic people to vote in a referendum so that they would have the last word.

The bankers are fleeing in fear

Returning to the tense situation in 2010, while the Icelanders were refusing to pay a debt incurred by financial sharks without consultation, the coalition government had launched an investigation to determine legal responsibilities for the fatal economic crisis and had already arrested several bankers and top executives closely linked to high risk operations.

Interpol, meanwhile, had issued an international arrest warrant against Sigurdur Einarsson, former president of one of the banks. This situation led scared bankers and executives to leave the country en masse.

In this context of crisis, an assembly was elected to draft a new constitution that would reflect the lessons learned and replace the current one, inspired by the Danish constitution.

To do this, instead of calling experts and politicians, Iceland decided to appeal directly to the people, after all they have sovereign power over the law. More than 500 Icelanders presented themselves as candidates to participate in this exercise in direct democracy and write a new constitution. 25 of them, without party affiliations, including lawyers, students, journalists, farmers and trade union representatives were elected.

Among other developments, this constitution will call for the protection, like no other, of freedom of information and expression in the so-called Icelandic Modern Media Initiative, in a bill that aims to make the country a safe haven for investigative journalism and freedom of information, where sources, journalists and Internet providers that host news reporting are protected.

The people, for once, will decide the future of the country while bankers and politicians witness the transformation of a nation from the sidelines.

Executive Director: “Why I Am Leaving Goldman Sachs”