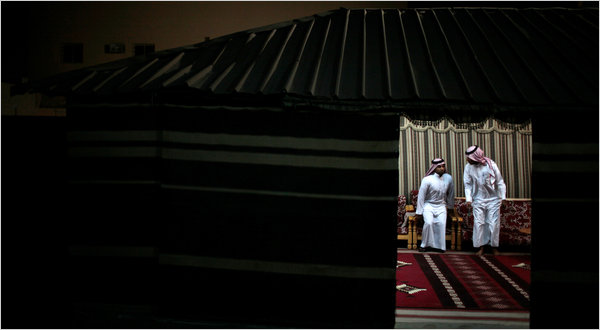 RIYADH, Saudi Arabia — As one nation after another has battled uprisings across the Arab world, the one major country spared is also its richest — Saudi Arabia, where a fresh infusion of money has so far bought order.

The kingdom is spending $130 billion to pump up salaries, build housing and finance religious organizations, among other outlays, effectively neutralizing most opposition. King Abdullah began wielding his checkbook right after leaders in Tunisia and Egypt fell, seeking to placate the public and reward a loyal religious establishment. The king’s reserves, swollen by more than $214 billion in oil revenue last year, have insulated the royal family from widespread demands for change even while some discontent simmers.

Saudi Arabia has also relied on its unusually close alliance with the religious establishment that has long helped preserve the power of the royal family. The grand mufti, the highest religious official in the kingdom, rolled out a fatwa saying Islam forbade street protests, and clerics hammered at that message in their Friday sermons.

But the first line of defense in this case was the public aid package. King Abdullah paid an extra two months’ salary to government employees and spent $70 billion alone for 500,000 units of low-income housing. As a reward to the religious establishment, he allocated about $200 million to their organizations, including the religious police. Clerics opposed to democratic changes crowed that they had won a great victory over liberal intellectuals.

“They don’t care about the security of the country, all they care about is the mingling of genders — they want girls to drive cars, they want to go the beaches to see girls in bathing suits!” roared Mohamed al-Areefy, a popular young cleric, in a recent Friday sermon.

Financial support to organizations that intellectuals dislike “was a way to cut out their tongues,” he said.

Saudi Arabia, a close ally of the United States, has struggled to preserve what remains of a regional dynamic upended by the Arab Spring — buttressing monarchies and blocking Iran from gaining influence.

While the United States has pressed other Arab nations to embrace democratic changes, it has remained largely silent on Saudi Arabia and the kingdom’s efforts to squelch popular revolts in neighboring Bahrain and Oman.

Saudi Arabia’s efforts have succeeded in the short run, at home and in its Persian Gulf backyard. But some critics call its strategy of effectively buying off public opinion unsustainable because it fails to address underlying problems.

The prince, whose 14 living children include the billionaire investor Prince Alwaleed bin Talal, said: “These people want to preserve their power, their money and their prestige, so they want to keep the status quo. They are afraid of the word change. This is a problem because they are shortsighted, but the difficulty is I don’t know how to change their way of thinking.”

The monarchy has not completely escaped calls for change. There have been at least three petitions, with a group of youths and even some members of the Sahwa, the staunchly conservative religious movement, calling for an elected consultative council.

The only major street protest scheduled for March 11 largely fizzled — its organizers were anonymous, and its stated goal of toppling the government lacked broad appeal. In the largely Shiite eastern provinces, though, police officers arrested scores of protesters.

The ruling princes have also moved against dissent in other ways, like imposing a new press law with punishments including a roughly $140,000 fine for vaguely defined crimes like threatening national security.

Saudis of all stripes say that they are less concerned about democratic elections than about fixing chronic problems, including the lack of housing, unemployment that is officially 10 percent but likely 20 percent or more, corruption, bureaucratic incompetence and transparency on oil revenues.