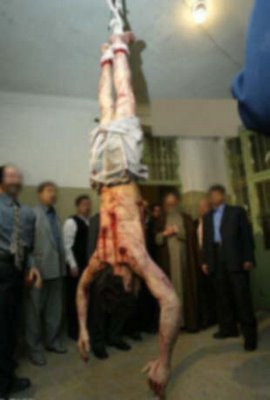 In the Exhibit – A – picture above you can see a barefoot
blindfolded man being taken hostage by the United States.

This is another example of a secret prison and a Interrogation room being operated by The United States Armed Forces. Exhibit (C) and (D) Pictures are very disturbing because it is obvious that that the thick blood stains on the wall are human brains. Look at the corner wall, do you see how there is thick blood stains and thick human tissues in the corner of the wall? The hostages were probably hanged in that corner, while the CIA and Zionist Mossad mercenaries were torturing and murdering the hostages. I can only assume that the CIA and Mossad mercenaries paint the walls often and they have the floors covered.

The pictures above is Nicholas Berg sitting on a white plastic chair for interrogation just before his execution in Iraq. Look at the color of the wall in the background.

The picture above are U.S. soldiers torturing hostages in Iraq (Abu Ghraib Prison). Look at the color of the walls, and look at the the top of the picture off center to the right, there is a white plastic chair.

The pictures above was taken at Abu Ghraib Prison in Iraq. Look at the color of the walls.

The pictures above are U.S. soldiers sitting on white plastic chairs in Iraq (Abu Ghraib Prison). You do the math.

The picture above is Nicholas Berg being executed. Common sense says he was murdered at Abu Ghraib Prison in Iraq.

From a Yahoo message board…

Word is spreading around Kodak Park here in Rochester NY. And will break on national News tonite that Kodak film experts have analyzed the Nick Berg video and some of the Abu Grhaib Prison videos comparing them for certain encrypted recording signatures.

Each video camera leaves a certain signature mark, much like a fingerprint or striation markings on bullets in gun barrels. Same goes for CD-ROM Burners, they leave a trace or type of Cookies on the finished product.

These are tested by computer and not visible by the naked eye. Experts here after lunch have concluded that one of the 2 video cameras used in the Nick Berg “beheading” was also used to film US troop abuses of Iraqi detainees.

THIS is BAD news for BushCorp., Military, and CIA.

THE HAL TURNER SHOW HAS RECEIVED A REPORT WHICH SAYS THE NICHOLAS BERG BEHEADING VIDEO WAS TAKEN WITH THE SAME DIGITAL CAMERA AS THE ABU GHRAIB PRISON TORTURE VIDEOS!

Apparently, digital camera manufacturers install a “digital watermark” on each digital imaging device, which is as unique as a fingerprint. Experts have reportedly analyzed the videos and compared the digital watermarks and determined that the same imging device took the Nicholas Berg beheading video and the Prison torture videos!

The exact text of the report is as follows:

But not just still pictures. Today video was released showing prisoners being tortured by Americans.

Aparently Kodak film experts at Kodak Park in Rochester New York have compared the digital watermarks of the torture video and the beheading video and have determined that one of the cameras used in the Nick Berg beheading is THE SAME CAMERA that took the prison torture video.

The US Defence Secretary Robert Gates has blocked the publication of further images of US soldiers abusing foreign detainees.

The US administration filed a request with the Supreme Court late on Friday preventing the release of the photos.

The order refers to some 40 images, including some of prisoners being abused in Afghanistan and Iraq.

Last month, Congress gave Mr Gates new powers to prevent their release under a law signed by the US president.

A Pentagon spokesman said that the order covers images related to investigations into allegations of abuse carried out outside the US between 11 September 2001 and 22 January 2009.

He suggested that releasing the pictures would put US soldiers at risk.

“Public disclosure of these photographs would endanger citizens of the US, members of the US armed forces, or employees of the US government deployed outside the US,” Mr Gates said in the order filed with the court.

The American Civil Liberties Union (ACLU) had sued for the release of 21 of the images.

The group says it will continue to press for the release of the images, arguing they represent “an important part of the historical record”.

“They are critical to the ongoing national conversation about accountability for torture,” ACLU’s director Jameel Jaffer said.

Initially, Mr Obama had suggested that he would not attempt to block the release of the photographs but he reversed this decision in May.

He said then that the release of such images would be “of no benefit” and might inflame opinion against the US.

June 19, 2009
presstv.irTwo militants’ leaders who defected from notorious Taliban chief in Pakistan have revealed that their comrade was pursuing a US-Israeli agenda across the country.A prominent militant leader, Turkistan Bittani, who broke away from Baitullah Mehsud, called him “an American agent”.

Mehsud, a warlord in his late 30s, has claimed responsibility for dozens of devastating string attacks on both civilians and security forces throughout the feared region.

Moreover, Baetani emphasized that Mehsud was being funded by US and Israeli intelligence services for brainwashing innocent youths.

The insurgents’ chief has recruited several teenagers who have carried out dozens of suicide attacks on Pakistani mosques and educational institutes over some past months.

Baetani also noted that al-Qaeda and Taliban’s leadership was never targeted in the dozens of US drone strikes in the country’s troubled north-west region.

Another defector, Qari Zainuddin, said that Mehsud had established strong links with Israeli intelligence services which were destabilizing the nuclear armed country. “These people (Mehsud and his men) are working against Islam.”

Insurgents have stepped up their attacks on civilian and religious centers in major cities across Pakistan which has fueled anti-Taliban sentiments among the Pakistani people.

The US invasion of Afghanistan in 2001 has prompted militants to focus their attention across the border in Pakistan, turning the restive tribal belt between the two neighbors into a scene of daily violence.

The US invaded Afghanistan more than seven years ago to allegedly eradicate insurgency and arrest Taliban and al Qaeda leaders.