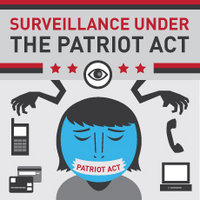 So. The Patriot Act turned 10 on Wednesday, October 26, 2011. And all we got were violations of our civil liberties. Well, that and this really awesome infographic, which contains information like this fun fact: Did you know that under the relaxed National Security Letter (NSL) standards in the Patriot Act, between 2003 and 2005, the FBI issued 143,074 NSLs, and reported a big, whopping zero terrorism prosecutions as a result? Zero, zilch, none, nada.

So what was the FBI using their shiny, new terrorism-fighting-intelligence-gathering powers for? Well, they did refer 17 criminal money laundering cases, 17 immigration-related cases, and 19 fraud cases. And the other 143,021 NSLs? Well, thanks to the gag order that accompanies them, the innocent people whose personal information was sought from third parties will never know.

Did you catch Wednesday’s Washington Post op-ed by Nicholas Merrill, our heroic plaintiff (seriously) who challenged an NSL he received as the owner of a small internet service provider? Spoiler alert: even though the government dropped the demand for information and allowed Merrill to reveal his identity, he still can’t — under threat of imprisonment — tell the person whose information was sought, nor can he identify precisely what information was demanded.

Speaking of secrecy, Sens. Ron Wyden (D-Ore.) and Mark Udall (D-Colo.) have been warning of a secret government interpretation of the Patriot Act. Sen. Wyden has gone so far as to say, “When the American people find out how their government has secretly interpreted the Patriot Act, they will be stunned and they will be angry.” Awesome. Well, we’re trying to find out about this secret interpretation. Last May, we filed a Freedom of Information Act (FOIA) request for information about the government’s interpretation and use of this provision, and on Wednesday (a.k.a. “the big anniversary”), we filed a lawsuit to force the government to comply with the request. We’ll keep you posted on what (and when) we learn.

In the meantime, the Patriot Act has been extended until 2015, but don’t think the government is done secretly demanding your personal information from third parties. This handy dandy timeline illustrates how the Patriot Act was just the beginning of big brother’s power and information grab.

And the next front? Cybersecurity. In the interest of so-called internet security, the administration is floating proposals that would sweep up huge amounts of personal information about innocent Americans, simultaneously violating privacy rights and overwhelming the government’s counterterrorism efforts with too much data. And if that’s not scary enough, some are even suggesting that the White House be given the ability to turn off the internet in the case of a “cyber emergency.” Do you know what that is? No? Neither do I. And, neither, it appears, do many of the legislators working on the issue. Now that’s something truly scary, just in time for Halloween.

Fortunately, there’s still time to urge your legislators not to let cybersecurity legislation follow in the Patriot Act’s abusive footsteps. Please go to our Action Center and take action today!