Jesuit/Knight of Malta Hypocrisy at its Finest: US War on Iran & Presidential Election 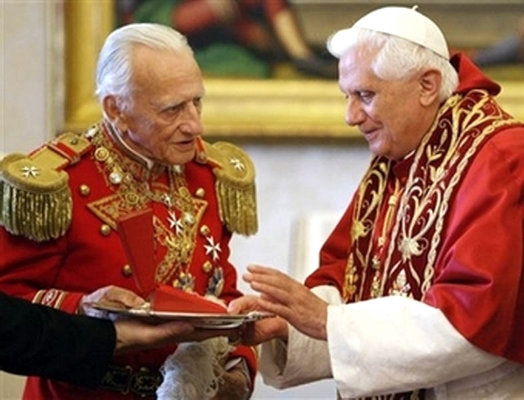 Secretary of War (pardon me, Secretary of Defense) Leon Panetta has begun the great impeachment agitation.  Yes, this “Italian-American” Roman Catholic, Jesuit-trained Knight of Malta has stated that he values permission of the “International Community” (as represented in the pope’s United Nations) to wage war on Iran over “Congressional Approval.”  This is the same Leon Panetta who served during the Clinton Administration, President Bill Clinton having also been trained by the Jesuits at Georgetown University in Washington at whose command Clinton bombed “heretic” Orthodox Serbia for seventy-seven days.  This is the same Leon Panetta who is an undeniable darling of the Jesuits, this Temporal Coadjutor having earned his JD at the Order’s Santa Clara University School of Law in California.

Further, Vice President Joe Biden has threatened to lead a movement in congress for the impeachment of President Barry Davis Obama if “Toby” does not seek “Congressional Approval” to wage the impending war on “infidel Shia” Iran.  Well, Joe, the real master of the pope’s mulatto and political creation of the CIA (ruled by the Knights of Malta), is also another Jesuit Temporal Coadjutor.  Sporting two honorary degrees conferred by the Jesuits, one from the University of Scranton and the other from St. Joseph’s University in Philadelphia, “Irish-American” Roman Catholic Joe Biden stands on the other side of the Order’s political Hegelian dialectic.  Thus, Panetta is openly for Obama and Biden is against his political master, while Barry has been groomed for the presidency by none other than socialist-communist Greg Galluzzo, the Jesuit of Chicago having acted in sync with his brethren at Loyola University Chicago!  All three, Panetta, Biden and Davis/Obama are all agents of the Jesuit Order obediently carrying out their parts of a screen play loaded with impending bloodshed and disaster for the country.

The question is: “Where are the Jesuits taking us via this agitation?”

To discover the answer we must review the Order’s quest, its final endgame for apostate Protestant/apostate Baptist White Anglo-Saxon-Celtic America.  We know the Order seeks to impose a fascist military dictatorship as was attempted in 1934 via Knights of Malta John J. Raskob and Joe Kennedy not to mention Knight of Columbus Al Smith.  They failed thanks to the bravery of General Smedley Butler; but the endgame would continue underground until now!  Further, the Order seeks to wage a war on Shia Islam, and later upon Sunni Islam (including Turkey) after the Shia are mass-murdered, a war intended to unite the entire Sunni Muslim world against the pope’s “Holy Roman” Fourteenth Amendment, Corporate-Fascist, Socialist-Communist American Empire (1868-Present).  Further, this unity among Sunni Islamic nations (including filthy rich Kuwait, the UAE and “Saudi” Arabia thanks to American technology given by the pope’s Knights) will then create a revived Sunni Caliphate, the forerunner of the pope’s Revived Kingdom of Babylon as per Jeremiah 50 and Revelation 18.  So again, where are the Jesuits taking us via this agitation in Washington?

Your Editor proposes the following possibilities:

1.  Obama is to be given another four more years.  This agitation, in the end will create sympathy for the “re-election” of “Toby.”  The pope’s script decrees Democrats begin the wars via the U.S. Navy and the Republicans either continue them while appearing to loathe the very war inherited from their predecessor.  Remember, this present “War on Terror” is in fact no declared war on a specific enemy.  As Jesuit Tom Clancy has rightly stated: there is no true cause of war, and thus there is no declared war on a specific nation.  Legally, the empire is not at war—yet!  And why should it so do?  The empire has been under Emergency War Powers since March 6, 1933!

2.  Biden made it clear.  If there is a nuclear/biological attack within the US then the president could launch an immediate attack/retaliation on the declared “enemy” without any congressional approval whatsoever—and the majority of congress would not dissent.  Therefore, there is the possibility, yea, an absolute certainty of imminent attack (not “if,” but “when”) planned by the pope’s CIA/NSA/FBI/DIA/DHS/ONI/etc., all acting in collusion to detonate a nuclear device sometime this Summer or Fall on the mainland that would accomplish several critical goals.  Or, the sinking of the USS Enterprise would provide the essential cause for war, while no damage to the American commercial infrastructure would enable the “War Effort” to proceed full force.  Either way, Obama would remain president/dictator/commander-in-chief with the consent of nearly the entire Black American population, Majority Savage Blacks and Minority Civil Blacks.  There would be no Fall election since martial law would be in effect which includes the suspension of Congress, a Congress described by the late Knight of Malta J. Peter Grace back in the 1980s as “535 clowns.”

3.  Obama would win the Fall election by a landslide (the pope’s Republican candidates having done their best to re-elect the pope’s Mulatto Sunni-Islamic usurper), the Order having manipulated its CFR-controlled press making a martyr out of a monster.  (If the Order did so with Martin Lucifer King, “so mote it be” with Masonic Brother Obama!)

4.  Obama would be impeached by the House of Representatives, Biden to be given the Democratic nomination backed by the aggrieved White Middle Class Tea Party—as no Republicans have called for Obama’s impeachment during this present agitation.  And if Obama was assassinated by a Shia “Iranian terrorist” and if a mini suitcase-nuke was detonated in a predominantly Black American city such as Detroit spilling over into Windsor, Canada, Biden most assuredly would be president via Martial Law backed by the entire country as well as Canada, both “right and left” then to continue the policy of his predecessor—”constitutionally.”  Democrats will hold the pope’s White House vaginal “Oval Office” of the Virgin Mary while war is declared on Iran!

If your Editor were the Black Pope he would continue this agitation throughout the Summer.  Then in July or August (when the harmonic windows for on-ground atomic detonations are open), he would use his Roman Catholic-led American Intelligence Community to carry out four simultaneous acts.  First, Obama (or one of his doubles) would be assassinated, his murderer to be an Iranian Shia.  Secondly, and at the same time, he would detonate a nuclear device in Black American Detroit now gutted of all industry once owned by the Knights of Malta.  These two crimes blamed on Iranian Muslims would unite and incite the entire Black American population (90 million people) to devotedly fight a war to the death against Iran.  Thirdly, your Editor would detonate the capitol building in Washington (as depicted in the movie Live Free and Die Hard “starring” Knight of Malta Bruce Willis), accomplishing three things: universal incitement of the entire White population (especially the Roman Catholic/apostate Protestant “New Right” Tea Party) to war on Iran; the end of the American Congress, the empire’s dictator to be in absolute power; and the movement of the capital to Denver!  And finally, I would sink the USS Enterprise thus uniting the entire American military to make total, merciless war on Shia Iran, Tehran hosting 20,000 racial Jews also to be slaughtered.  Yes, blaming the Iranians for the the murder of Obama, the blowing of Detroit and Washington, D.C., and the sinking of the Enterprise—all covertly facilitated by the united American Intelligence Community overseen by its Intelligence Czar, the infamous Jesuit Temporal Coadjutor Admiral Michael McConnell—would do the trick.

May the risen Lord Jesus Christ frustrate the plots of these incorrigible sinners, this dastardly military Company of Jesus ruling Rome, Tehran and Washington!

Enjoy and discern the video below!

The Masonic Founding of The United States of America