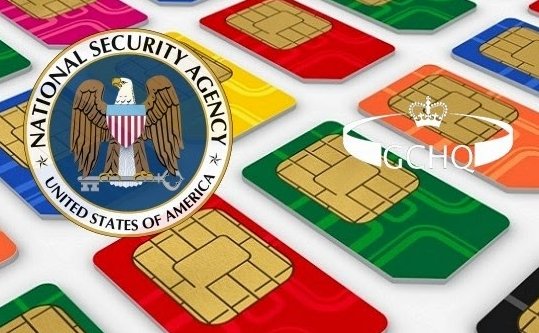 AMERICAN AND BRITISH Leaked: NSA Spies hacked into the internal computer network of the largest manufacturer of SIM cards in the world, stealing encryption keys used to protect the privacy of cellphone communications across the globe, according to top-secret documents provided to The Intercept by National Security Agency whistleblower Edward Snowden.

The hack was perpetrated by a joint unit consisting of operatives from the NSA and its British counterpart Government Communications Headquarters, or GCHQ. The breach, detailed in a secret 2010 GCHQ document, gave the surveillance agencies the potential to secretly monitor a large portion of the world’s cellular communications, including both voice and data.

The company targeted by the intelligence agencies, Gemalto, is a multinational firm incorporated in the Netherlands that makes the chips used in mobile phones and next-generation credit cards. Among its clients are AT&T, T-Mobile, Verizon, Sprint and some 450 wireless network providers around the world. The company operates in 85 countries and has more than 40 manufacturing facilities. One of its three global headquarters is in Austin, Texas and it has a large factory in Pennsylvania.

In all, Gemalto produces some 2 billion SIM cards a year. Its motto is “Security to be Free.”

With these stolen encryption keys, intelligence agencies can monitor mobile communications without seeking or receiving approval from telecom companies and foreign governments. Possessing the keys also sidesteps the need to get a warrant or a wiretap, while leaving no trace on the wireless provider’s network that the communications were intercepted. Bulk key theft additionally enables the intelligence agencies to unlock any previously encrypted communications they had already intercepted, but did not yet have the ability to decrypt.

As part of the covert operations against Gemalto, spies from GCHQ — with support from the NSA — mined the private communications of unwitting engineers and other company employees in multiple countries.

Gemalto was totally oblivious to the penetration of its systems — and the spying on its employees. “I’m disturbed, quite concerned that this has happened,” Paul Beverly, a Gemalto executive vice president, told The Intercept. “The most important thing for me is to understand exactly how this was done, so we can take every measure to ensure that it doesn’t happen again, and also to make sure that there’s no impact on the telecom operators that we have served in a very trusted manner for many years. What I want to understand is what sort of ramifications it has, or could have, on any of our customers.” He added that “the most important thing for us now is to understand the degree” of the breach.

Leading privacy advocates and security experts say that the theft of encryption keys from major wireless network providers is tantamount to a thief obtaining the master ring of a building superintendent who holds the keys to every apartment. “Once you have the keys, decrypting traffic is trivial,” says Christopher Soghoian, the principal technologist for the American Civil Liberties Union. “The news of this key theft will send a shock wave through the security community.”

Beverly said that after being contacted by The Intercept, Gemalto’s internal security team began on Wednesday to investigate how their system was penetrated and could find no trace of the hacks. When asked if the NSA or GCHQ had ever requested access to Gemalto-manufactured encryption keys, Beverly said, “I am totally unaware. To the best of my knowledge, no.”

According to one secret GCHQ slide, the British intelligence agency penetrated Gemalto’s internal networks, planting malware on several computers, giving GCHQ secret access. We “believe we have their entire network,” the slide’s author boasted about the operation against Gemalto.

Additionally, the spy agency targeted unnamed cellular companies’ core networks, giving it access to “sales staff machines for customer information and network engineers machines for network maps.” GCHQ also claimed the ability to manipulate the billing servers of cell companies to “suppress” charges in an effort to conceal the spy agency’s secret actions against an individual’s phone. Most significantly, GCHQ also penetrated “authentication servers,” allowing it to decrypt data and voice communications between a targeted individual’s phone and his or her telecom provider’s network. A note accompanying the slide asserted that the spy agency was “very happy with the data so far and [was] working through the vast quantity of product.”

The Mobile Handset Exploitation Team (MHET), whose existence has never before been disclosed, was formed in April 2010 to target vulnerabilities in cellphones. One of its main missions was to covertly penetrate computer networks of corporations that manufacture SIM cards, as well as those of wireless network providers. The team included operatives from both GCHQ and the NSA.

While the FBI and other U.S. agencies can obtain court orders compelling U.S.-based telecom companies to allow them to wiretap or intercept the communications of their customers, on the international front this type of data collection is much more challenging. Unless a foreign telecom or foreign government grants access to their citizens’ data to a U.S. intelligence agency, the NSA or CIA would have to hack into the network or specifically target the user’s device for a more risky “active” form of surveillance that could be detected by sophisticated targets. Moreover, foreign intelligence agencies would not allow U.S. or U.K. spy agencies access to the mobile communications of their heads of state or other government officials.

“It’s unbelievable. Unbelievable,” said Gerard Schouw, a member of the Dutch Parliament, when told of the spy agencies’ actions. Schouw, the intelligence spokesperson for D66, the largest opposition party in the Netherlands, told The Intercept, “We don’t want to have the secret services from other countries doing things like this.” Schouw added that he and other lawmakers will ask the Dutch government to provide an official explanation and to clarify whether the country’s intelligence services were aware of the targeting of Gemalto, whose official headquarters is in Amsterdam.

Last November, the Dutch government proposed an amendment to its constitution to include explicit protection for the privacy of digital communications, including those made on mobile devices. “We have, in the Netherlands, a law on the [activities] of secret services. And hacking is not allowed,” Schouw said. Under Dutch law, the interior minister would have to sign off on such operations by foreign governments’ intelligence agencies. “I don’t believe that he has given his permission for these kind of actions.”

The U.S. and British intelligence agencies pulled off the encryption key heist in great stealth, giving them the ability to intercept and decrypt communications without alerting the wireless network provider, the foreign government or the individual user that they have been targeted. “Gaining access to a database of keys is pretty much game over for cellular encryption,” says Matthew Green, a cryptography specialist at the Johns Hopkins Information Security Institute. The massive key theft is “bad news for phone security. Really bad news.”