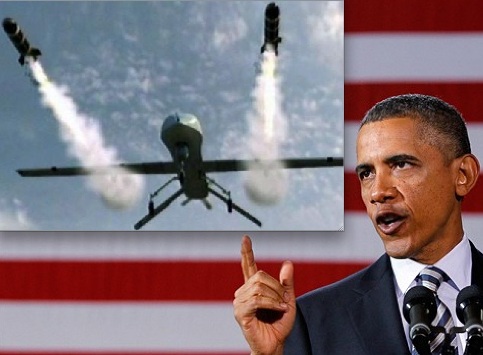 A wild Washington Post story reports that the Obama administration has been developing plans to “institutionalize” its extrajudicial assassination program. The lede is bonkers:

Over the past two years, the Obama administration has been secretly developing a new blueprint for pursuing terrorists, a next-generation targeting list called the “disposition matrix.”

The matrix contains the names of terrorism suspects arrayed against an accounting of the resources being marshaled to track them down, including sealed indictments and clandestine operations. U.S. officials said the database is designed to go beyond existing kill lists, mapping plans for the “disposition” of suspects beyond the reach of American drones.
Although the matrix is a work in progress, the effort to create it reflects a reality setting in among the nation’s counterterrorism ranks: The United States’ conventional wars are winding down, but the government expects to continue adding names to kill or capture lists for years.
Among senior Obama administration officials, there is a broad consensus that such operations are likely to be extended at least another decade. Given the way al-Qaeda continues to metastasize, some officials said no clear end is in sight.

You should really take the time to read the entire piece yourself; the information contained therein is truly alarming.
Many observers of related matters will have a lot to say about these revelations over the coming weeks, months and probably even years — and I’m one of them. But I quickly want to point out something that immediately struck me as particularly disturbing, and that many people likely won’t notice.
The “evolving database” — the “disposition matrix”

was developed by the NCTC, under former director Michael Leiter, to augment those organizations’ separate but overlapping kill lists, officials said.

The NCTC stands for the National Counterterrorism Center. What’s the big deal, right? The NCTC sounds like a terrorism related thing, so why wouldn’t it have developed the Kill List replacement, the Disposition Matrix?
Not that long ago the ACLU’s Chris Calabrese warned us about what really goes on at the NCTC: massive, secretive data collection and mining of trillions of points of data about most people in the United States. These points of data can include “records from law enforcement investigations, health information, employment history, travel and student records. Literally anything the government collects would be fair game, and the original agency in charge of protecting the privacy of those records would have little say over whether this happened, or what the spy agency did with the information afterward. What if that spy agency could add commercial information, anything it – or any other federal agency – could buy from the huge data aggregators that are monitoring our every move?”
Calabrese wasn’t describing a “what if” scenario. He was describing the NCTC.
The rules governing that data collection and retention used to say that “non-terrorism related” data about US persons had to be purged within 180 days of collection — and it wasn’t supposed to be collected in the first place. But this year President Obama oversaw a troubling change in that policy; non-terrorism related data about US citizens can now be retained for five years — or forever if the government feels like it.
From the ACLU’s blog:

Once information is acquired, the new guidelines authorize broad new search powers. As long NCTC says its search is aimed at identifying terrorism information, it may conduct queries that involve non-terrorism data points and pattern-based searches and analysis (data mining). The breadth and wrongheadedness of these changes are particularly noteworthy. Not only do they mean that anytime you interact with any government agency you essentially enter a lineup as a potential terrorist, they also rely on a technique, datamining, which has been thoroughly discredited as a useful tool for identifying terrorists. As far back as 2008 the National Academy of Sciences found that data mining for terrorism was scientifically “not feasible” as a methodology, and likely to have significant negative impacts on privacy and civil liberties.
Perhaps most disturbing, once information is gathered (not necessarily connected to terrorism), in many cases it can be shared with “a federal, state, local, tribal, or foreign or international entity, or to an individual or entity not part of a government” – literally anyone. That sharing can happen in relation to national security and safety, drug investigations, if it’s evidence of a crime or to evaluate sources or contacts. This boundless sharing is broad enough to encompass disclosures to an employer or landlord about someone who NCTC may think is potentially a criminal, or at the request of local law enforcement for vetting an informant.
All of this is happening with very little oversight.

As they say in the intelligence world: let’s connect the dots.
The NCTC collects impossibly enormous reams of data about all of us, routinely, stores it for a long time (maybe forever), and “data mines” it to look for “suspicious patterns” or whatever else the government wants to look for. Now we know that the NCTC is also the government outfit in charge of crafting a “disposition matrix” to oversee the management and institutionalization of the US government’s extrajudicial assassinations — a power the Obama administration asserts it can (without due process) apply to US citizens as well as foreigners.
We need to know a whole lot more about how these two operations intertwine. For some reason, I am not holding my breath for forthright government disclosures to that effect.
via PrivacySOS