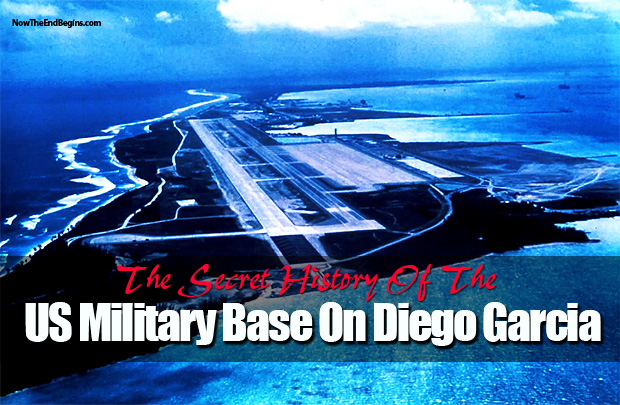 INDIAN OCEAN (INTELLIHUB) — It’s now been 30-days since Malaysian Airlines flight 370 went missing after departing from the Kuala Lumpur International Airport (KLIA) on route to China and search and rescue teams have still found no trace of the Boeing 777 aircraft or any of its 239 passengers, after being fed botched search area data by Malaysian officials.

In fact, it has been reported that family members of the missing believe that the Malaysian government is involved in a massive cover-up of what really took place on Mar. 8, after the aircraft’s transponder was manually overridden via human intervention. Moreover, Malaysian authorities have suspiciously failed to release the plane’s cargo hold manifest and actual cockpit voice recordings which have been repeatedly requested by various family members, investigators and search and rescue teams to aid in the search for the missing plane.

Now according to Sara Bajc the girlfriend of Phillip Wood, a missing passenger aboard flight 370, there is a general consensus amongst flight 370′s family members, based in Malaysia, that possibly a U.S. militarized faction may have intercepted and commandeered the airliner. In fact, Bajc even stated that there is some witness to two fighter jets accompanying MH370 after the flight went dark, evading radar.

“I am sure that the military in Malaysia knew that plane was there and has tracked that plane in some way. Now whether they were in control of it or not we don’t know. Many people are saying that the United States is involved […] but the general thinking across the families here and even non-families […] believe this was a military operation of some sort.”, said Bajc, demonstrating her true inner feelings.

So what do we know?

Based on radar data supplied from several other countries and early on reports, we know that MH370, under intelligent human control, turned-back to the west at about 1:21am on the morning of Mar 8., just after the planes transponder was shut off. It was then reported by Intellihub News that the plane then took a zig-zag course heading Northwest toward the Straights of Malacca and the Andaman Islands where it was later intercepted on radar by a Malaysian and military installation. However, the Malaysian military, press and government quickly covered up the leaked report. Then 10-days later officials in Thailand released their radar data willingly, which matched the leaked original leaked Malaysian military radar blips putting MH370 just North of Malaysia before turning to the South. Interestingly, Thai officials claim that no one ever asked for their radar data, that’s why they willingly submitted it 10-days after MH370 went missing.

New information obtained by CNN Sunday, tells us that “flight 370 may have been flown on purpose along a route designed to avoid radar detection”, signifying a highly contrived and likely militarized plan to commandeer the aircraft, its cargo, and 239 passengers. Shockingly this information dovetails with a report by Shepard Ambellas titled YouTube investigator: ‘Flight 370 landed at Diego Garcia military base, plane and passengers then put in a Faraday style hangar’ which was released on Mar. 24, detailing how flight 370 was spotted by locals flying low over the Maldives Islands between 6:15am and 6:40am on the morning of Mar. 8, the day flight 370 went missing. This sighting was also independently confirmed by American investigator John Halloway, after interviewing an eyewitness living on the island of Kudahuvadhoo, via telephone, who saw the massive white jumbo-jet bearing a red and blue stripe down its side. The eyewitness testimony also revealed that the plane was flying “Northwest to Southeast”, which would have set the plane up for a backdoor westwardly approach to U.S. military base Diego Garcia avoiding all sightings from any straggler base personnel on the remote island in the Indian Ocean.

Moreover, investigators also determined that out of 5 simulations that were loaded into the captain’s home flight simulator, one was of Diego Garcia. The police confiscated the flight simulator from the pilot’s house in Shah Alam and reassembled it at the police headquarters where experts are currently conducting checks.

“The simulation programmes are based on runways at the Male International Airport in Maldives, an airport owned by the United States (Diego Garcia), and three other runways in India and Sri Lanka, all have runway lengths of 1,000 metres. We are not discounting the possibility that the plane landed on a runway that might not be heavily monitored, in addition to the theories that the plane landed on sea, in the hills, or in an open space,” an unnamed source told Berita Harian.

Since the disappearance of flight MH370, loved ones of missing passengers have been on an emotional roller coaster ride as the mainstream media and the governments involved with the search continue to create diversions and spread false information.  Two weeks ago, the Malaysian government claimed to have found wreckage of the missing aircraft.  Their information came from a satellite search crew, but was not verified.  Based on this flimsy evidence, the Malaysian government was quick to announce that the wreckage had been found and that everyone on board the plane had been killed.  This information was callously passed on to the loved ones of missing passengers through a standard text message from the government.

Malaysian officials claimed that the mystery had been solved and seemed to be celebrating the terrible news that the plane was found in pieces.  However, the announcement of the crash was made prematurely and soon after it was discovered that the large masses detected in the ocean were just large swaths containing junk and trash, but no airplane.

After weeks of false alarms and wild goose chases the Malaysian government said that the plane may never be found, but the vast majority of the passengers family members refuse to believe the official story.

As of now, 30-days into it, the current goose chase is locating the black box “ping” that has allegedly being detected somewhere in the Indian Ocean.

The head of the multinational search for the missing flight recently told CBS News that two electronic pulses were picked up by a Chinese ship, which could be the missing planes black box. However, it was later admitted that the reports in question were published before they were verified, expanding the endless rabbit hole of propaganda for onlookers to get lost in.  While reports of the black box pings have yet to be verified, they continue to get constant mainstream media coverage.

The contents of flight 370

As of now the motive for such an elaborate crime is not yet fully known.

What we do know is that 20 employees from the multi-billion dollar Austin Texas-based tech firm Freescale Semiconductor along with one IBM executive were aboard the flight.

Adding to the mystery, the Lord Jacob Rothschild (Blackstone Group) controlled Freescale Semiconductor Ltd. has kept the flow of any information regarding their employees at a minimum.

The Voice of Russia reported on Mar. 31 in an article titled MH370 kept hidden at top-secret US military base – media reports:

Interestingly, that leading innovative company [Freescale Semiconductor Ltd.] has been oddly unwilling to provide information on the missing people. Only the nationalities of the employees were made public: 12 of them were from Malaysia and eight from China. However, Freescale has persistently declined to release their identities. “Out of respect for the families’ privacy during this difficult time, we will not be releasing the names of the employees who were on board the flight at this time,” Freescale spokeswoman Jacey Zuniga said.

Nevertheless, Mitch Haws, Freescale’s vice president, described them as “people with a lot of experience and technical background,” adding that “they were very important.” According to Reuters, the vanished employees were engineers or specialists involved in projects to streamline and cut costs at key manufacturing facilities in China and Malaysia.

While it had been reported previously that 4 of the Freescale Semiconductor employees aboard flight 370 were patent holders, their names did not appear on the official flight manifest released by the Malaysian government, adding even a deeper element for independent investigators.