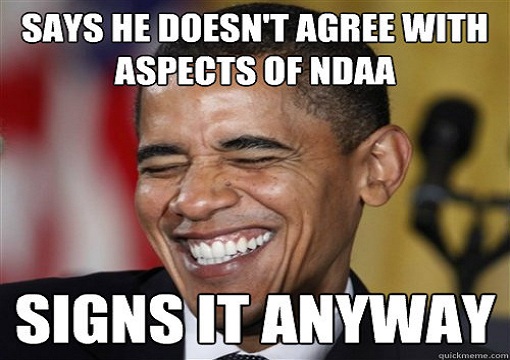 Bagram airbase was used by the US to detain its ‘high-value’ targets during the ‘war on terror’ and is still Afghanistan’s main military prison. Photograph: Dar Yasin/AP

In May, something extremely rare happened: a federal court applied the US constitution to impose some limits on the powers of the president. That happened when federal district court judge Katherine Forrest of the southern district of New York, an Obama appointee, preliminarily barred enforcement of the National Defense Authorization Act (NDAA), the statute enacted by Congress in December 2011 with broad bipartisan support and signed into law by President Obama (after he had threatened to veto it).

That 2011 law expressly grants the president the power to indefinitely detain in military custody not only accused terrorists, but also their supporters, all without charges or trial. It does so by empowering the president to indefinitely detain not only al-Qaida members, but also members of so-called “associated forces”, as well as anyone found to “substantially support” such forces – whatever those terms might mean. I wrote about that decision and the background to this case when it was issued.

What made Judge Forrest’s ruling particularly remarkable is that the lawsuit was brought by eight journalists and activists, such as former New York Times reporter Chris Hedges, Daniel Ellsberg, Noam Chomsky, and Birgitta Jónsdóttir, who argued that their work, which involves interactions with accused terrorists, could subject them to indefinite detention under the law’s broad and vague authority, even for US citizens on US soil. The court agreed, noting that the plaintiffs presented “evidence of concrete – non-hypothetical – ways in which the presence of the legislation has already impacted those expressive and associational activities”. The court was particularly disturbed by the Obama DOJ’s adamant refusal to say, in response to being asked multiple times, that the law could not be used to indefinitely detain the plaintiffs due to their journalistic and political activities.

Last week, Judge Forrest made her preliminary ruling permanent, issuing a 112-page decision explaining it. Noting that the plaintiffs “testified credibly to having an actual and reasonable fear that their activities will subject them to indefinite military detention”, she emphasized how dangerous this new law is given the extremely broad discretion it vests in the president to order people detained in military custody with no charges: 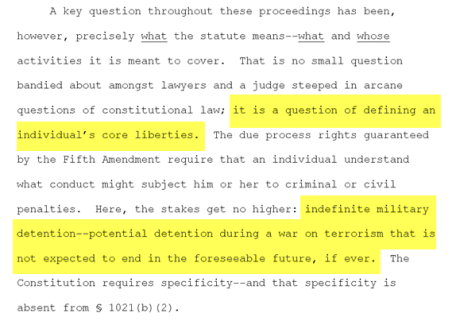 The court also brushed aside the Obama DOJ’s prime argument, echoing the theories of John Yoo: namely, that courts have no business “interfering” in the president’s conduct of war. After acknowledging that the president is entitled to deference in the national security realm, Judge Forrest dispensed with the Obama DOJ’s claim with this vital observation: one that should be unnecessary but, in the 9/11 era, is all too commonly ignored: 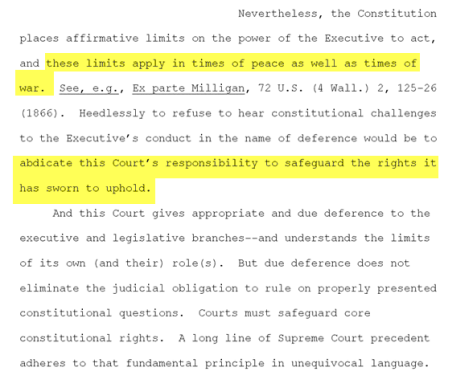 In other words: while the president is entitled to deference in his conduct of war, he’s not entitled to wield the power to order people, including American citizens, indefinitely imprisoned in military detention. Regardless of how he claims he intends to exercise this power, the mere act of vesting it in him so chills the exercise of first amendment and other protected rights that the constitution can have no meaning if courts permit it to stand.

In response to this ruling, the Obama administration not only filed an immediate appeal, but they filed an emergency motion asking the appeals court to lift the injunction pending the appeal. Obama lawyers wrote a breathless attack on the court’s ruling, denouncing it as “vastly troubling” and claiming that it “threatens tangible and dangerous consequences in the conduct of an active military conflict” and “threatens irreparable harm to national security”.

The Obama DOJ also objected that the decision “was entered against the president as commander-in-chief in his conduct of ongoing military operations, is unprecedented and exceeded the court’s authority”: how irreverent. And they argued that the broad detention power claimed by President Obama “has been endorsed by two presidents [meaning him and George W Bush], by the [rightwing] DC circuit in habeas litigation brought by Guantánamo detainees, and by the Congress in Section 1021(b)(2).”

I’ve written at length before about why indefinite detention is so dangerous, and why a statute such as the NDAA – which purposely (as the court here found) leaves open the question of whether it applies to US citizens – is one of the most pernicious laws enacted in some time. I won’t rehash that here, but I do want to make two points about the Obama administration’s new fight in defense of this law.

First, the Obama administration’s unhinged claim that Judge Forrest’s ruling imperils national security gives the lie to the central excuse for the NDAA: namely, that it does not expand the president’s detention powers beyond what is already vested by the 2001 Authorization to Use Military Force (AUMF). Judge Forrest’s ruling leaves the 2001 AUMF in place and did not purport to nullify any prior decisions applying it. Therefore, if the NDAA does nothing that the 2001 AUMF did not already do – as Obama defenders relentlessly claimed to justify his signing of this odious bill – then it cannot possibly be the case that Judge Forrest’s ruling harms national security, since Obama already has all the detention power he claims he needs under the 2001 AUMF.

The reality is that the NDAA did indeed wildly expand the president’s detention powers beyond what the 2001 AUMF provided. In contrast to the 2001 AUMF – which empowered the president to act against a relatively narrow category: those “he determines planned, authorized, committed, or aided the terrorist attacks that occurred on 11 September 2001, or harbored such organizations or persons” – the NDAA empowers him to act against a much broader range of people: not only those who perpetrated 9/11, but also “associated forces”, and not only those who are members of such groups, but those who “substantially support” them.

While the Bush and Obama DOJs have long absurdly interpreted the 2001 AUMF to apply to this broader range, and while some courts have accepted that interpretation, the law itself vested no such power. The NDAA did. That is why civil liberties groups such as the ACLU denounced Obama’s signing of it so vociferously, and it is why the Obama DOJ is so horrified, obviously, by the prospect that it will be invalidated: precisely because it so drastically expands their detention power. Both the court’s ruling and the Obama DOJ’s reaction to that ruling prove that the NDAA does indeed provide the president with significantly enhanced authority of indefinite detention.

Second, to see the sorry and wretched state of liberties in the US under President Obama, let us look to Afghanistan. The US is currently attempting to turn over to the Afghan government control of the lawless prison system the US has long maintained in Bagram and other parts of that country. But that effort is running into a serious problem: namely, the US wants the prisoners to remain there in cages without charges, but the Afghans are insisting that indefinite detention violates their belief in due process. From an Associated Press article Monday headlined “Afghans reject US-favored administrative detention”:

“An Afghan judicial panel ruled Monday that administrative detention violates Afghan law, potentially thwarting a US plan to hand over Afghan detainees that American officials believe should continue to be held without a trial.

“President Hamid Karzai’s office announced in a statement that a top-level judicial panel met earlier in the day and decided that the detention of Afghan citizens without a court trial ‘has not been foreseen in Afghan laws’ and therefore could not be used.

“The US government has long held Afghans captured in operations inside the country without trial, arguing that they are enemy combatants and therefore can be detained for as long as their release might pose a danger to the international coalition …

“A US official confirmed that the transfer of detainees had paused because of the dispute.”

Is that not amazing? On the very same day that the Obama DOJ fights vigorously in US courts for the right to imprison people without charges, the Afghan government fights just as vigorously for basic due process.

Remember: the US, we’re frequently told, is in Afghanistan to bring democracy to the Afghan people and to teach them about freedom. But the Afghan government is refusing the US demand to imprison people without charges on the ground that such lawless detention violates their conceptions of basic freedom. Maybe Afghanistan should invade the US in order to teach Americans about freedom.

This is not the first time this has happened. In 2009, the Obama administration decided that it wanted to target certain Afghan citizens for due process-free assassinations on the ground that the targets to be executed were drug “kingpins”. They were to be killed based solely on US accusations, with no trial, just as the Obama administration does with its own citizens. But again, that plan ran into a roadblock: Afghan leaders were horrified by the notion that their citizens would be extrajudicially executed based on unproven suspicions [my emphasis]:

“A US military hit list of about 50 suspected drug kingpins is drawing fierce opposition from Afghan officials, who say it could undermine their fragile justice system and trigger a backlash against foreign troops.

“The US military and Nato officials have authorized their forces to kill or capture individuals on the list, which was drafted within the past year as part of Nato’s new strategy to combat drug operations that finance the Taliban …

“General Mohammad Daud Daud, Afghanistan’s deputy interior minister for counternarcotics efforts, praised US and British special forces for their help recently in destroying drug labs and stashes of opium. But he said he worried that foreign troops would now act on their own to kill suspected drug lords, based on secret evidence, instead of handing them over for trial.

“‘They should respect our law, our constitution and our legal codes,’ Daud said. ‘We have a commitment to arrest these people on our own’ …

“There is a constitutional problem here. A person is innocent unless proven guilty,” [former Afghan interior minister Ali Ahmad Jalali] said. “If you go off to kill or capture them, how do you prove that they are really guilty in terms of legal process?”

In other words, the Obama administration has received far more resistance to its due process-free imprisonments and assassinations from Afghans than it has from its own citizens in the US. If only more Americans, including progressives, were willing to point out the most basic truths in response to these Obama power seizures, such as: “If you go off to kill or capture them, how do you prove that they are really guilty in terms of legal process?”

Instead, many Americans, particularly in the age of Obama, are content to assume that anyone whom the US government accuses of being a terrorist should, for that reason alone, be assumed to be guilty, and as a result, any punishment the president decides to dole out – indefinite imprisonment, summary execution – is warranted and just; no bothersome, obsolete procedures such as “trials” or “indictments” are necessary.

It is that mindset that will ensure that Obama’s vigorous fight to preserve the power of indefinite detention will provoke so little objection: among Americans, that is – though obviously not among Afghans, who seem to have an actual understanding of, and appreciation for, the value of due process.