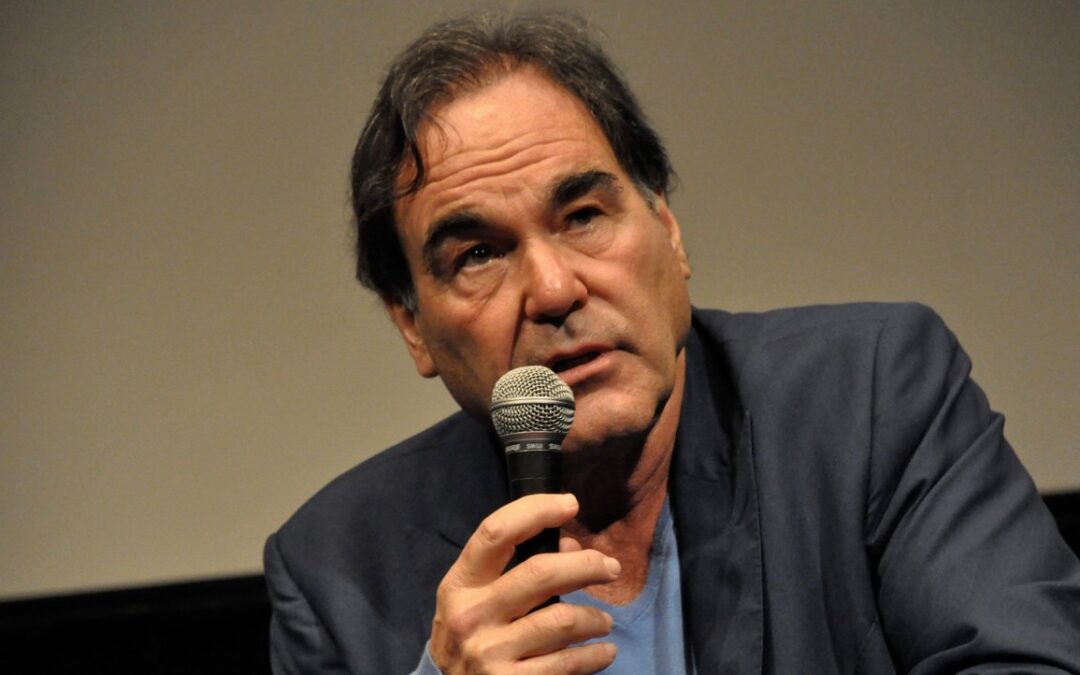 Stone, the son of a wealthy stockbroker, was raised in New York City. He briefly studied at Yale University before dropping out to teach English in South Vietnam. Upon his return, Stone lived in Mexico for a year and again attended Yale for a short period. In 1967, during the Vietnam War, he enlisted in the U.S. Army. He distinguished himself in combat, earning two Purple Hearts and a Bronze Star. Stone then enrolled in film school at New York University (B.A., 1971), studying under director Martin Scorsese.

Stone was deeply affected by his war experiences, and his student films, such asLast Year in Viet Nam (1971), dealt directly with the consequences of the Vietnam conflict. After graduating, he directed the horror movies Seizure! (1974) and The Hand (1981), the latter of which starred Michael Caine. Stone also began experimenting with screenwriting, and he won an Academy Award for best adapted screenplay for Midnight Express (1978), which was based on the true story of a man brutally abused while imprisoned for drug smuggling in Turkey.

Stone devoted much of the early 1980s to writing screenplays, including Conan the Barbarian (1982), Scarface (1983), which was directed by Brian De Palma and starred Al Pacino, and Year of the Dragon (1985). He returned to directing withSalvador (1986), which he also wrote. In the film, a journalist (played by James Woods) documents the atrocities committed during the El Salvador uprisings of 1980–81. Stone again drew on the trauma of the Vietnam War in Platoon (1986), for which he won another Academy Award, this time for directing. The film navigates the perils of war from the perspective of a new recruit who quickly realizes that the idealism that motivated his decision to enlist was misguided. Stone drew upon personal experience once more for Wall Street (1987), using memories of his father’s career as a stockbroker to conjure an indictment of the greed and deceit governing the financial world. In 1988 he adapted Eric Bogosian’s Off-Broadway play Talk Radio to film.

Stone emphasized the continuing ramifications of the Vietnam War with Born on the Fourth of July (1989). The film, based on the autobiography of Vietnam veteran Ron Kovic, chronicles the evolution of a young man, played by Tom Cruise, from patriotic soldier to paraplegic antiwar activist. Stone won an Academy Award for directing that movie and received a fourth career nomination for his writing. The year 1991 saw the release of both JFK, a polarizing investigation of the circumstances surrounding the assassination of Pres. John F. Kennedy, and The Doors, a stylish account of the rise and fall of the titular American rock band. InHeaven and Earth (1993), Stone approached the Vietnam War and its aftermath from the perspective of a young Vietnamese woman.

Stone again courted controversy with Natural Born Killers (1994), a film, written byQuentin Tarantino, about the savagely violent exploits of a married couple, played by Woody Harrelson and Juliette Lewis. While Stone claimed that the film was meant to be critical of sensationalized violence, some critics found it guilty of exactly what it purported to condemn. Stone then cast Anthony Hopkins in the title role of Nixon (1995), a measured take on the life of the U.S. president. He also developed the screenplay for Evita (1996), an adaptation of the Andrew Lloyd Webber musical about Argentine politician Eva Perón (played by Madonna).

Stone revisited some of his favoured motifs, power and violence, in Any Given Sunday (1999), about professional football, and in Alexander (2004), a poorly received biography of Alexander the Great. World Trade Center (2006), a retelling of the events of September 11, 2001, from the viewpoint of two police officers, returned Stone to the centre of public debate. While the film was critically acclaimed, some questioned the propriety of making the film so soon after the tragedy. W. (2008), his biopic of Pres. George W. Bush, drew ire from both extremes of the political spectrum for its refusal to pass definitive judgment, positive or negative, on its subject. Stone later directed Wall Street: Money Never Sleeps(2010), a sequel to the 1987 film that was set amid the global financial crisis of 2008, and Savages (2012), an ensemble thriller about marijuana trafficking that, in its depiction of seedy mayhem, was reminiscent of his earlier U Turn (1997).

In addition to directing and writing, Stone produced many of his own movies. Besides narrative films, he made two documentaries about Latin American politics: Comandante (2003), about Cuban dictator Fidel Castro, and South of the Border (2009), which focused on several other left-wing leaders, notably Venezuelan Pres. Hugo Chávez. With Peter Kuznick, he also created Oliver Stone’s Untold History of the United States (2012), a 10-part television documentary (and accompanying book) that took an unorthodox look at the preceding century of American political history. In 1997 Stone published a semiautobiographical novel,A Child’s Night Dream.

Sean Stone, son of controversial filmmaker Oliver Stone has acted in his father’s films such as Wall Street, The Doors, JFK, Natural Born Killers and many more. He has starred and directed in his own feature film Greystone Park.  Sean joined the team of investigators for the Tru TV hit Conspiracy Theory with Jesse Ventura. Sean currently hosts an alternative media show ‘Buzzsaw’ featuring interviews with whistleblowers, styling itself as the ‘real X files’ looking into the hidden agendas behind the news.