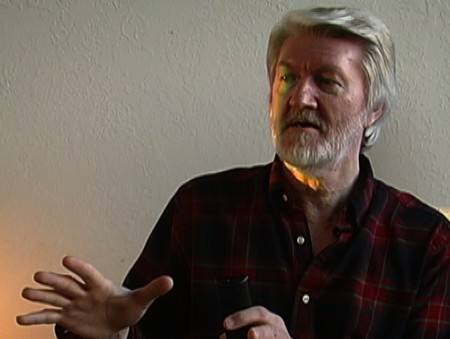 Richard C. Hoagland is a former museum space science Curator; a former NASA Consultant; and, during the historic Apollo Missions to the Moon, was science advisor to Walter Cronkite and CBS News. In the mid-1960’s, at the age of 19 (possibly “the youngest museum curator in the country at the time”), Hoagland created his first elaborate commemorative event — around NASA’s first historic unmanned fly-by of the planet Mars, Mariner 4. A simultaneous all-night, transcontinental radio program the evening of the Encounter (linking the museum in Springfield, Mass., and NASA’s JPL control center, in Pasadena, Ca.), co-produced by Hoagland and WTIC-Radio, in Hartford, Ct., was subsequently nominated for a Peabody Award, one of journalism’s most prestigious.

In the early 1970’s, Hoagland proposed to Carl Sagan (along with Eric Burgess) the placement of a “message to Mankind” aboard Pioneer 10 — humanity’s “first unmanned probe of Jupiter“; subsequent to its 1973 Jovian Encounter, celestial mechanics resulted in Pioneer 10 becoming the first artifact to successfully escape the solar system into the vast Galaxy beyond — carrying “the Plaque” — whose origins were officially acknowledged by Sagan in the prestigious journal, SCIENCE (175 [1972], 881).

In the early 1980’s, based on NASA data from the more sophisticated unmanned Voyager fly-bys of the outer planets, Hoagland became the first to propose (in a widely-quoted series of UPI and AP stories on his startling paper, published in 1980 in Star & Sky magazine) the possible existence of “deep ocean life” under the global ice shield perpetually surrounding the enigmatic moon of Jupiter, Europa. At the time, most (though not all) NASA scientists instantly derided this idea; two outstanding dissenters from the unfortunately then-common NASA view were Director of the Goddard Institute for Space Studies, Dr. Robert Jastrow, and well-known science writer and visionary, Arthur C. Clarke. In the sequel to his outstanding epic “2001” (“2010: Odyssey Two”), built entirely around this extraordinary concept of “eon-old life in the ice-covered oceans of Europa,” Clarke wrote:

“The fascinating idea that there might be life on Europa . . . was first proposed by Richard C. Hoagland [in a 30-page article] in the magazine Star & Sky… This quite brilliant concept has been taken seriously by a number of astronomers (notably NASA’s Institute for Space Studies, Dr. Robert Jastrow), and may provide one of the best motives for the projected GALILEO Mission.”

Remarkably, before recent NASA press conferences and television documentaries, celebrating the successfully GALILEO probe of Jupiter’s atmosphere, December 7, 1995, NASA scientists’ “belated” acceptance of the startling possibility of “life in Europa’s oceans” has been widely presented and discussed. As is GALILEO’s potential acquisition of new data from its upcoming Europa fly-bys which could lead to actual confirmation (!) of the “Hoagland model.” Curiously, despite clearly prior publication and detailed elaboration of the concept, Hoagland’s name is not being mentioned anywhere by NASA, or by current GALILEO scientists, in connection with “Europa”…

In the early 1990’s Mr. Hoagland led a team of volunteers and consultants in the creation of a pioneering “space-age” inner-city educational effort at Dunbar Senior High, just off Capitol Hill, in Washington D.C. The experiment was built around the concept of “student involvement in real time’ mission planning and data acquisition” during various NASA planetary exploration missions, such as “Hubble” and the ill-fated “Mars Observer.” Starting as an after school extracurricular activity, and using donated state-of-the-art computer imaging equipment and enhancement algorithms, “The Enterprise Mission” and “becoming a crew member of the ‘U.S.S. Dunbar'” eventually became an accredited course in the Dunbar school curriculum. Over the years, scores of senior NASA Headquarters and Goddard Space Flight Center personnel have enthusiastically participated in the project, including installation of a student satellite data link direct to NASA and on-site briefing of students on many current NASA projects. Education advocate, then First Lady Barbara Bush, personally came to Dunbar early in the project, for a personal briefing by the students; this — the original “ENTERPRISE Mission” — was ultimately nominated for a White House “Point of Light” award.

For the last 13 years, since 1983, Hoagland has been leading an outside scientific Team in a critically acclaimed independent analysis of possible intelligently-designed artifacts on NASA (and other) data sets — beginning with the unmanned NASA VIKING mission to Mars in 1976, and its provocative images of a region called “Cydonia.” Hoagland and his Team have been invited at least four times to various NASA Centers since 1988, to brief thousands of NASA scientists and engineers on the results of their on-going “Cydonia investigation.” In 1989, Hoagland and his colleagues briefed then-Chairman of the House Committee on Space Science and Applications, Representative Robert Roe, on the status of their “Mars Investigation.” Chairman Roe, before his sudden and unexplained resignation from the Congress, directed NASA to acquire better images from Mars during its then-upcoming “Mars Observer mission”; Mars Observer’s equally sudden and tragic disappearance in 1993 precluded any new data relating to “Cydonia.” In 1993, Hoagland was awarded the International Angstrom Medal for Excellence in Science by the Angstrom Foundation, in Stockholm, Sweden, for that continuing research. In the last 4 years, he and his Team’s investigations have been quietly extended to include over 30 years of previously hidden data from NASA, Soviet, and Pentagon missions to the Moon — with startling results.