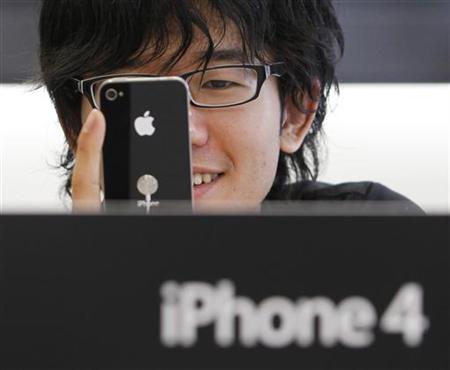 (Reuters) – Dozens of police departments nationwide are gearing up to use a tech company’s already controversial iris- and facial-scanning device that slides over an iPhone and helps identify a person or track criminal suspects.

The so-called “biometric” technology, which seems to take a page from TV shows like “MI-5” or “CSI,” could improve speed and accuracy in some routine police work in the field. However, its use has set off alarms with some who are concerned about possible civil liberties and privacy issues.

The smartphone-based scanner, named Mobile Offender Recognition and Information System, or MORIS, is made by BI2 Technologies in Plymouth, Massachusetts, and can be deployed by officers out on the beat or back at the station.

An iris scan, which detects unique patterns in a person’s eyes, can reduce to seconds the time it takes to identify a suspect in custody. This technique also is significantly more accurate than results from other fingerprinting technology long in use by police, BI2 says.

When attached to an iPhone, MORIS can photograph a person’s face and run the image through software that hunts for a match in a BI2-managed database of U.S. criminal records. Each unit costs about $3,000.

Some experts fret police may be randomly scanning the population, using potentially intrusive techniques to search for criminals, sex offenders, and illegal aliens, but the manufacturer says that would be a difficult task for officers to carry out.

Sean Mullin, BI2’s CEO, says it is difficult, if not impossible, to covertly photograph someone and obtain a clear, usable image without that person knowing about it, because the MORIS should be used close up.

“It requires a level of cooperation that makes it very overt — a person knows that you’re taking a picture for this purpose,” Mullin said.

But constitutional rights advocates are concerned, in part because the device can accurately scan an individual’s face from up to four feet away, potentially without a person’s being aware of it.

Experts also say that before police administer an iris scan, they should have probable cause a crime has been committed.

“What we don’t want is for them to become a general surveillance tool, where the police start using them routinely on the general public, collecting biometric information on innocent people,” said Jay Stanley, senior policy analyst with the national ACLU in Washington, D.C.

Meanwhile, advocates see the MORIS as a way to make tools already in use on police cruiser terminals more mobile for cops on the job.

“This is (the technology) stepping out of the cruiser and riding on the officer’s belt, along with his flashlight, his handcuffs, his sidearm or the other myriad tools,” said John Birtwell, spokesman for the Plymouth County Sheriff’s Department in southeastern Massachusetts, one of the first departments to use the devices.

The technology is also employed to maintain security at Plymouth’s 1,650 inmate jail, where it is used to prevent the wrong prisoner from being released.

“There, we have everybody in orange jumpsuits, so everyone looks the same. So, quite literally, the last thing we do before you leave our facility is we compare your iris to our database,” said Birtwell.

One of the technology’s earliest uses at BI2, starting in 2005, was to help various agencies identify missing children or at-risk adults, like Alzheimer’s patients.

Since then, it has been used to combat identity fraud, and could potentially be used in traffic stops when a driver is without a license, or when people are stopped for questioning at U.S. borders.

Facial recognition technology is not without its problems, however. For example, some U.S. individuals mistakenly have had their driver’s license revoked as a potential fraud. The problem, it turns out, is that they look like another driver and so the technology mistakenly flags them as having fake identification.

Roughly 40 law enforcement units nationwide will soon be using the MORIS, including Arizona’s Pinal County Sheriff’s Office, as well as officers in Hampton City in Virginia and Calhoun County in Alabama.

THRIVE: What On Earth Will It Take?

IBM: Mind reading is less than five years away. For real.