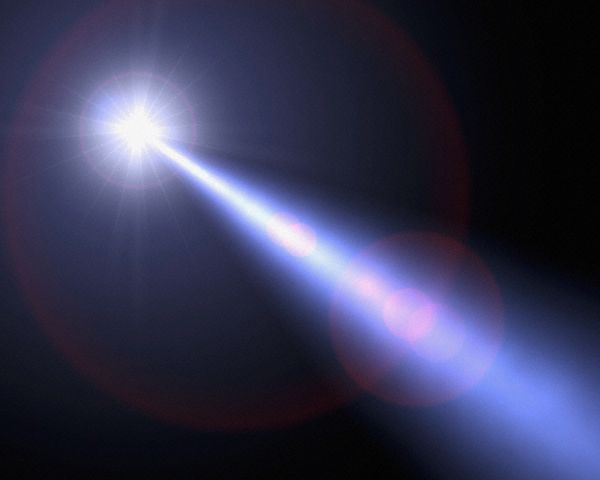 In two independent experiments that defy the notions of Einstein, researchers have been able to stop, then restart a beam of light.

Ordinarily, light travels at the speed of 186,282 miles per second, but the research team of Lene Hau, a professor of physics at Harvard, who in 1999 was able to slow light down to 38 miles per hour, has been able to trap light in a cloud of sodium atoms super-cooled to near ‘absolute zero.’

“It’s nifty to look into the chamber and see a clump of ultracold atoms floating there,” Hau says. “In this odd state, light takes on a more human dimension; you can almost touch it.” [1]

In an independent experiment, an easier approache was tried by the team of Ronald Walsworth and Mikhail Lukin at the Harvard-Smithsonian Center for Astrophysics (CfA).

They shot laser beams through a dense cloud of rubidium and helium gas. (Rubidium, in its solid or natural form, is a soft, silver-white metal.) The light bounced from atom to atom, gradually slowing down until it stopped. No supervacuum or ultra-cold was needed. In fact, the chamber where the light stopped was at a temperature of 176 degrees F. [1]

Both experiments accomplish almost the same thing, however, in the CfA experiment researchers were only able to store about half of the incoming light, and the storage time was about half that of Hau’s experiment.

Remarkably, scientists are somewhat uncertain about the implications and practicality of this research.

“We hope for wonderful things,” says David Phillips, who worked on the CfA “stop light” project. “Our imagination hasn’t figured out what the possibilities are yet.” [1]

However, there appear to be clear implications for using experiments like this to ultimately improve the speed of computers, potentially creating the possibility to shift from binary computing to quantum encoding of data.

Computers operating by these so-called quantum effects are much more efficient that those available today, or even on the drawing board. (“Quantum” refers to changes in the energy levels of the atoms.) Today’s machines represent information in bits, electronic combinations of zeros and ones. Bits represented by quantum states of atoms could carry much, much more information. Cubic inch for cubic inch, quantum computers could tackle problems that would stymie the most super of conventional computers. For example, they could perform many calculations simultaneously. [1]

The eminent physicist Albert Einstein theorized that it was impossible for light to travel at a speed faster than 186,282 miles per second, and in this case he has not yet been proven wrong.

Watch the following video for amazing footage of Hau’s research:

Sources for this article include:
[1] www.news.harvard.edu

This article is offered under Creative Commons license. It’s okay to republish it anywhere as long as attribution bio is included and all links remain intact.