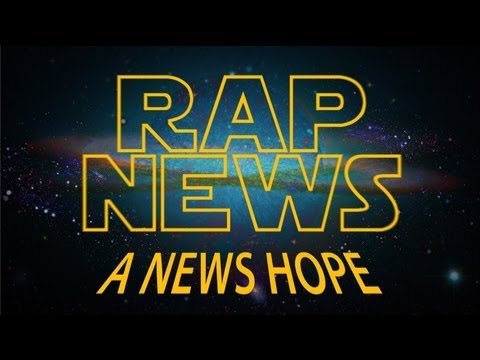 Juice Rap News: Episode XIII – A NEWS HOPE. It is a time of corporate war; deprived of a reliable media the people of Planet Earth are kept misinformed and in a state of perpetual conflict. Is an honest Fourth Estate the only Force than can restore peace and balance to the Galaxy? To find out, we consult two of journalism’s most influential and inflammatory figures: Rebel journalist enfant terrible, Julian Assange, who awaits a verdict in London which could see him ‘extradited’ to Sweden. And on the opposite end of the journalistic spectrum: Rupert Murdoch, head of the mighty NewsCorp media Empire, embroiled in legal scandals that go to the highest and lowest levels of celebrity in Britain. In the manichean manner of some ancient laser sword and forcery epic, join the wisest news-anchor in the Galaxy, Robert Foster, as he attempts to wrangle these two figures together for a rap-debate. Will the light or the dark side prevail – and is it really that easy to know which is which? How many Bothans died to bring us this information? Is the Force Estate with Robert? Will we see THE RETURN OF THE JOURNALI before the EMPIRE EXTRADITES BACK? For answers to all these questions and more, pull down your blast shields, switch off your on-board computer and feel the Force, in this latest episode of Juice Rap News… or click play.

SUPPORT the creation of new episodes of Juice Rap News – a show which relies on private donations: http://thejuicemedia.com/donate

CREDITS:
– ARTWORK by Zoe Tame http://visualtonic.com.au
– ORIGINAL MUSIC: Main Beat: “The Golden Era” – by The GOAT, ILL Beat Constructor: http://www.thegoatbeats.com
– ORIGINAL RAP-WARS theme music composed by Adrian Sergovich.
– VIDEO: Special thanks to Jonas Schweizer in Germany for creating the animated intro and RapWars special FX. (ATM he’s working on an awesome new documentary project: http://www.indiegogo.com/CaribbeanNewcomer)
– Many thanks to the following humans for lending their time and talent to the making of this episode: Ellen (Brianna Manning and SwededTrooper_1) and Zoe (SwedeTrooper_2); Lucy for voiceovers (Admiral Gillard, Manning & SwedeTroopers); Rosie Dunlop for make-up magick; Dave Abbott for technical & video advice. And finally, to Kristinn Hrafnsson of WikiLeaks for his debut kameo.

TRANSLATIONS: Thanks to Euclides for Portuguese translation :)
**If you would like to translate this episode into your language, please contact us first via: http://thejuicemedia.com/contact**