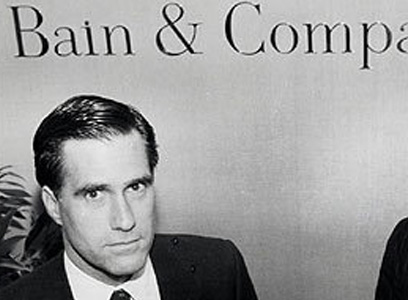 One year before Mitt Romney began working on the Bain & Company project to rebuild “Monsanto” and cast their new image and focus on agriculture biotechnology, Congress passed a bill banning PCB (polychlorinated biphenyl), an odorless, tasteless, clear liquid known to cause cancer that was the “bread and butter” of Monsanto’s profits. Monsanto was already branded and plagued with the label of having created the “Agent Orange” contaminated dioxins used in Vietnam. Now Monsanto would need a big save, financially and reputation-wise, so they could fool the public with their new image and a new “frontier,” while secretly polluting and genetically modifying American agriculture with the new faceless poison known as Roundup.

Romney knew his first job at Bain was to propel an evil company that was on the brink of failure. He knew Monsanto’s previous reputation and about all the litigation. Romney also knew he would be rewarded financially in the biggest way if he could pull the whole thing off, and he did. Romney changed Monsanto’s image over the years, from a scandal ridden chemical giant to a seemingly “prestigious” Agri-business firm. (http://dprogram.net)

Fresh out of Harvard in 1977, Romney basically lead Monsanto down an unethical but highly lucrative path, helping sweep the PCB and dioxin scandals under the rug, since that negative public perception was crippling the company. Romney and Bain recommended to Monsanto that they focus the business on genetically engineered crops and RoundUp, the massively profitable weed killer. Monsanto finished developing and patenting the glyphosate molecule and has marketed Roundup ever since. (http://naturalsociety.com)

But it wasn’t a “pretty” road to this infamous success for Romney. Monsanto was still bombarded with an onslaught of litigation throughout Romney’s years at Bain, including a $180 million settlement covering the claims of over 50,000 troops that got cancer from hiking over and through Agent Orange in the burned up jungles of Vietnam. Agent Orange is on record to have contaminated a total of 10 million Vietnamese and American people, including children and babies. This was by far the largest chemical warfare operation in human history up until now, when Monsanto’s RoundUp laced GMO vegetables like corn and soy have begun a cancer inducing genocide which could easily surpass the damage done in the Vietnam jungles just 50 years ago. (http://naturalsociety.com)

Romney would later use his Monsanto “payback money” and power to become the “private equity king,” mowing down companies and robbing workers of their retirement savings. (http://dprogram.net) This is how Romney created jobs back then, and GMO is how he will create jobs and promote disease if he wins the presidency of the United States. Big Pharma, of course, is behind it all, because when people eat GM vegetables and get cancer, Big Pharma and the chemo scam make billions, if not trillions.

Romney has already chosen his biotech partners in crime

One of Mitt’s advisory co-chairs was a key speaker at the ‘Biotechnology Industry Organization‘ and said, “It is vital for the United States and other countries to support science-based standards and systems that will bring agricultural biotechnology products to the market to meet this demand.” It’s not hard to guess who will make up Romney’s cabinet if he wins. But the most disappointing part of the upcoming election isn’t the fact that Mitt Romney, the “Savior of Monsanto” is running for president, it’s the fact that Obama already supports GMO and has the former vice president of Monsanto running the FDA right now. America has everyone believing they have a choice, voting between good and bad, or good and not so good, but really, the choice is that you can vote yes for Obama GMO or yes for Romney GMO. President Obama and Mitt Romney both support human beings eating RoundUp pesticide regularly and without any labeling on the foods. Just to let you know. There’s definitely a “War on Cancer” in effect, but it’s a war to promote cancer, to make sure more people eat CANCER-CAUSING AGENTS, ones that are made by the same company that created the AGENT ORANGE nightmare. (http://www.naturalnews.com)

No matter what the TWO PARTY SYSTEM says, they support GMO

Back in 2008, Obama promised his supporters he would be on their side when it comes to knowing what they are eating, and in a campaign speech he stated, “We’ll let folks know whether their food has been genetically modified because Americans should know what they’re buying.”(http://spreadlibertynews.com)

Today, Monsanto (the seed police) and similar unethical chemical giants loom over ALL FARMERS AND ALL FOOD, and a global cancer epidemic is imminent. Monsanto survived its near collapse thanks to Mitt Romney, and Monsanto thrives today thanks to George W. Bush and Barack Obama. Soon, if enough Supreme Court Justices side with the biotech industry, the U.S. government will have complete reign over the food industry. (http://www.naturalnews.com/034847_Michael_Taylor_Monsanto_FDA.html)

Question: Why doesn’t either candidate for president mention nutrition at all? Shouldn’t we be praising Nutritional Science like we do NASA? Is the GMO shame too heavy? When the next bailout comes, will Monsanto get a big cut? After all, their lobbyists are like a “Super PAC” of ONE PERCENTERS. If only we could see how much their offshore accounts inflate after elections. Make no mistake, the current handful of “running” politicians want GMO to rule over all farms in the United States.

Don’t give in; you can set the precedent in November!

You have real choices. You can eat only organic food. You can write your “anti-GMO” congressmen like Dennis Kucinich and Ron Paul, who support efforts to not only label GM food, but ban it altogether. You can help end this hostile takeover of the food supply. (http://www.youtube.com/watch?v=4J_YvtbSSqg) We, the organic people, can win this “election,” and the precedent can be set in California in November, and then eventually all over the United States. (http://www.naturalnews.com)

Vietnam may have been the largest chemical warfare operation in human history, but at least this time the people have a choice, because instead of being drafted and hiking through the toxic “cancer machine” in a war, humans can simply educate themselves about contaminated dioxins in genetically modified foods and not eat them. (http://www.youtube.com/watch?v=SfFSS1vLcXA&feature=related)