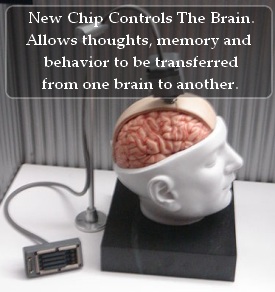 Scientists demonstrate the ability to use an MRI machine to read brainwaves and brain activity and recreate movies watched by test subjects.

I previously reported on scientists demonstrating the ability to upload, download and transfer memories and learned behavior between host brains.

Scientists Successfully Implant Chip That Controls The Brain Allowing Thoughts, Memory And Behavior To Be Transferred From One Brain To Another

Scientists working at the University of Southern California, home of the Department of Homeland Security’s National Center for Risk and Economic Analysis of Terrorism Events, have created an artificial memory system that allows thoughts, memories and learned behavior to be transferred from one brain to another.

In a scene right out of a George Orwell novel, a team of scientists working in the fields of “neural engineering” and “Biomimetic MicroElectronic Systems” have successfully created a chip that controls the brain and can be used as a storage device for long-term memories. In studies the scientists have been able to record, download and transfer memories into other hosts with the same chip implanted. The advancement in technology brings the world one step closer to a global police state and the reality of absolute mind control.

More terrifying is the potential for implementation of what was only a science fiction fantasy – the “Thought Police” – where the government reads people’s memories and thoughts and then rehabilitate them through torture before they ever even commit a crime based on a statistical computer analysis showing people with certain types of thoughts are likely to commit a certain type of crime in the future.

Perhaps a less sensational example, than those I just depicted out of own of Orwell’s famous dystopian novels would be using the technology as it is depicted the modern day Matrix movies, in which computer programs are uploaded into people’s brains allowing them to instantly learn how to perform a wide variety of tasks.

That is exactly the example that Smart Planet uses in their write-up on the USC press release.

Today, the anti-utopian Orwellian of a regime of though police has become one step closer to realization as another instance of what was once considered science fiction fantasy has become a reality.

Researchers from the University of Berkeley, California have announced they have demonstrated the ability to read brain waves to replay the memories of movies stored in our brain.

The video below shows the results of the study displaying the actual movie watched on left and the reconstruction of the movie scientists read from the brain is on the right.

While the technology is not perfect, the break through the scientists have made is amazing.

The scientists began their research based on the hypothesis that certain parts of the cortex in the brain would be stimulated in a certain manner from certain visual stimulus.

From there they monitored brain activities, including brainwaves and blood pressure changes, using an MRI machine and were able to recreated the recollection of movies stored on the brains of test subjects.

Of course, researchers are touting the technology for the possible use in dealing with people suffering from cognitive disorders. However, the industrial military complex will find such a technology as in invaluable in the use of the so-called war on terror.

Brain imaging reveals the movies in our minds

Scientists at the University of California, Berkeley, have managed to decode and reconstruct dynamic visual experiences processed by the human brain.

Currently, researchers are only able to reconstruct movie clips people have already viewed.   However, the breakthrough is expected to pave the way for reproducing the movies inside our heads that no one else sees – such as dreams and memories.

“This is a major leap toward reconstructing internal imagery,” explained Professor Jack Gallant, a UC Berkeley neuroscientist and coauthor of the study published online today in the journal Current Biology. “We are opening a window into the movies in our minds.”

[…]Nevertheless, researchers emphasize that the brain imaging technology is “decades” away from allowing users to read thoughts and intentions – a theme which is prevalent in numerous dystopian science fiction books.   Yet, the achievements of Galant’s team are particularly impressive, since the scientists actually decoded brain signals generated by moving pictures.

“Our natural visual experience is like watching a movie,” said Shinji Nishimoto, lead author of the study and a post-doctoral researcher in Gallant’s lab.   ”In order for this technology to have wide applicability, we must understand how the brain processes these dynamic visual experiences.”

[…]The brain activity was recorded while subjects viewed the first set of clips which were fed into a computer program that learned, second by second, to associate visual patterns in the movie with the corresponding brain activity.

Brain activity evoked by the second set of clips was used to test the movie reconstruction algorithm. This was done by feeding 18 million seconds of random YouTube videos into the computer program so it could predict the brain activity each film clip would most likely evoke in each subject.

Finally, the 100 clips that the computer program determined were most similar to the clip that the subject had probably seen were merged to produce a blurry, yet continuous reconstruction of the original movie.

Reconstructing movies using brain scans has been somewhat of a challenge because the blood flow signals measured using fMRI change much more slowly than the neural signals that encode dynamic information in movies. As such, most previous attempts to decode brain activity tended to focus on static images.