The Way of the Drone: Emblem for an Empire of Cowards 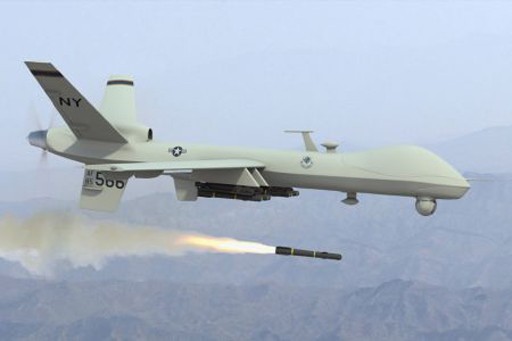 A few months back, I reposted here an article that I wrote 10 years ago, before the invasion of Iraq: a fictional scenario of how the Terror War would play out on the ground of the target nations — and in the minds of those sent to wage these campaigns. I was reminded of that piece by a story in the latest Rolling Stone.

The RS story, by Michael Hastings, depicts the drone mentality now consuming the US military-security apparatus, a process which makes the endless slaughter of the endless Terror War cheaper, easier, quieter. I didn’t anticipate the development in my proleptic piece; the first reported “kill” by American drones, in Yemen, had taken place just a few weeks before my article appeared in the Moscow Times.

But what brought my earlier piece to mind was a brief mention of the “military slang” now being used to designate the victims of the drones. Below are a few snippets from my 2002 post, a fictional email by an occupation soldier to a friend:

Yo, Ed! I’m looking out the window of Watchtower 19 in Force Zone Seven. They’re loading up the dead wagon. Three friendlies, two uncardeds, the usual collateral – and one bug. We zapped the market before the bug got his hard-on – another one of those Czech AK-47 knock-offs that our friendly neighborhood warlord keeps bringing in. He says he doesn’t know how the bugs get hold of them – they drop down from heaven, I guess …

… I’d just come off night patrol in Deep-City Zone, hardcore bugland, backing up some Special Ops doing a Guantanamo run on terrorperp suspects. Banging down doors, barrel in the face of some shrieking bug-woman in her black bag, children scuttling in the dark like rats, the perp calling down an airstrike from Allah on our heads. You know the drill. You know the jangle. Not even the new meds can keep you blanked out completely.  So there’s always the overstep somewhere. Woman’s cheekbone cracking from a backhand, some kid stomped or booted out of the way. Some perp putting his hand in one of those damned dresses they wear, going for who knows what – Koran? Mosquito bite? Scimitar? Czech special? – and you open up. More shrieking, more screaming – and then the splatter on the wall.

For a new generation of young guns, the experience of piloting a drone is not unlike the video games they grew up on. Unlike traditional pilots, who physically fly their payloads to a target, drone operators kill at the touch of a button, without ever leaving their base – a remove that only serves to further desensitize the taking of human life. (The military slang for a man killed by a drone strike is “bug splat,” since viewing the body through a grainy-green video image gives the sense of an insect being crushed.)

“Bugs” being “splattered.” This is what Barack Obama — who has expanded the drone death squads beyond the imaginings of George W. Bush — and all of his brave button pushers and joystick riders think of the defenseless human beings they are killing (including 174 children by last count).

This has been the attitude underlying the Terror War since its beginnings. When I wrote my piece with its “bug” imagery, I was only reflecting what was already obvious and pervasive, both in the military-security war machine and in much of the general public. Anyone designated by those in power as an “enemy” — for any reason, known or unknown, or for no reason at all — is considered a subhuman, an insect, whose destruction is meaningless, without moral content, like swatting a fly on the wall. (As, for example, in this 2008 piece about a figure much lauded by progressives at the time: “Crushing the Ants.”)

There is not only a tolerance for this official program of state murder; there is an absolute enthusiasm for it. Our rulers heartily enjoy ordering people to be killed. (And to be tortured, as we noted here last week.) It makes them feel good. It makes them feel “hard,” in every sense of the word. As Hastings notes:

From the moment Obama took office, according to Washington insiders, the new commander in chief evinced a “love” of drones. “The drone program is something the executive branch is paying a lot of attention to,” says Ken Gude, vice president of the Center for American Progress. “These weapons systems have become central to Obama.” In the early days of the administration, then-chief of staff Rahm Emanuel would routinely arrive at the White House and demand, “Who did we get today?”

Here are some examples of what Rahm and his then-boss, the Nobel Peace Prize Laureate, were “getting” with their flying deaths squads:

But for every “high-value” target killed by drones, there’s a civilian or other innocent victim who has paid the price. The first major success of drones – the 2002 strike that took out the leader of Al Qaeda in Yemen – also resulted in the death of a U.S. citizen. More recently, a drone strike by U.S. forces in Afghanistan in 2010 targeted the wrong individual – killing a well-known human rights advocate named Zabet Amanullah who actually supported the U.S.-backed government. The U.S. military, it turned out, had tracked the wrong cellphone for months, mistaking Amanullah for a senior Taliban leader. A year earlier, a drone strike killed Baitullah Mehsud, the head of the Pakistani Taliban, while he was visiting his father-in-law; his wife was vaporized along with him. But the U.S. had already tried four times to assassinate Mehsud with drones, killing dozens of civilians in the failed attempts. One of the missed strikes, according to a human rights group, killed 35 people, including nine civilians, with reports that flying shrapnel killed an eight-year-old boy while he was sleeping. Another blown strike, in June 2009, took out 45 civilians, according to credible press reports.

And of course there is this, the follow-up to the “extrajudicial killing” of U.S. citizen Anwar al-Awlaki. After killing al-Awlaki — without ever charging him with a single crime — the Obama administration then murdered his 16-year-old son (as we noted here last year). Hastings writes:

In the days following the killing, Nasser and his wife received a call from Anwar’s 16-year-old son, Abdulrahman al-Awlaki, who had run away from home a few weeks earlier to try to find his now-deceased father in Yemen. “He called us and gave us his condolences,” Nasser recalls. “We told him to come back, and he promised he would. We really pressed him, me and his grandmother.”

The teenage boy never made it home. Two weeks after that final conversation, his grandparents got another phone call from a relative. Abdulrahman had been killed in a drone strike in the southern part of Yemen, his family’s tribal homeland. The boy, who had no known role in Al Qaeda or any other terrorist operation, appears to have been another victim of Obama’s drone war: Abdulrahman had been accompanying a cousin when a drone obliterated him and seven others. The suspected target of the killing – a member of Al Qaeda in the Arabian Peninsula – is reportedly still alive; it’s unclear whether he was even there when the strike took place.

The news devastated the family. “My wife weeps every day and every morning for her grandson,” says Nasser, a former high-ranking member of the Yemenite government. “He was a nice, gentle boy who liked to swim a lot. This is a boy who did nothing against America or against anything else. A boy. He is a citizen of the United States, and there are no reasons to kill him except that he is Anwar’s son.”

The boy was probably killed in a “signature strike,” where bold and brave CIA analysts sit back in their chairs and observe people going about their business in a foreign country far away. If their activities look “suspicious” according to some arbitrary, secret criteria, then they can be slaughtered instantly by a drone missile — even if the attackers have no idea whatsoever who the targets are or what they are actually doing. Plotting terrorism, or praying? Organizing jihad, or holding a wedding? Building bombs, or having lunch? The attackers don’t know — and can’t know. They simply put down their Cheetohs and fire the missile. Who cares? It’s just “bug splatter.”

And the fact is, no one does care. As Hastings notes, this hideous program of murder and terror has been fully embraced by the political elite and by society at large. And our rulers are now bringing it back home with a vengeance, putting more and more Americans under the unsleeping eye of government drones watching their every move, looking for the “signature” of “suspicious” behaviour. Hastings notes:

In the end, it appears, the administration has little reason to worry about any backlash from its decision to kill an American citizen – one who had not even been charged with a crime. A recent poll shows that most Democrats overwhelmingly support the drone program, and Congress passed a law in February that calls for the Federal Aviation Administration to “accelerate the integration of unmanned aerial systems” in the skies over America. Drones, which are already used to fight wildfires out West and keep an eye on the Mexican border, may soon be used to spy on U.S. citizens at home: Police in Miami and Houston have reportedly tested them for domestic use, and their counterparts in New York are also eager to deploy them.

History affords few if any examples of a free people — in such a powerful country, under no existential threat, undergoing no invasion, no armed insurrection, no natural disaster or epidemic or societal collapse — giving up their own freedoms so meekly, so mutely. Most Americans like to boast of their love of freedom, their rock-ribbed independence and their fiercely-held moral principles: yet they are happy to see the government claim — and use — the power to murder innocent people whenever it pleases while imposing an ever-spreading police state regimen on their lives and liberties. Sheep doped with Rohypnol would put up a stronger fight than these doughty patriots.

Hasting’s story should be read in full. In its straightforward marshalling of facts and refusal to simply parrot the spin of the powerful (something we used to call “journalism,” kids; ask your grandparents about it, they might remember), it lays out the hideous reality of our times. I am tempted to call it an important story — but I know that it will sink with scarcely a ripple into the abyss of our toxic self-regard. A few will read it and be horrified; the rest will stay riveted on the oh-so-exciting and oh-so-important race to see who will get to perpetuate this vile and murderous system for the next four years.

Critical Facts All US Citizens Should Know Abut Israel & Palestine