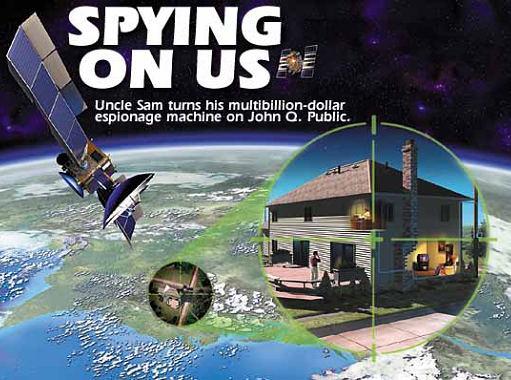 Privacy is eroding fast as technology offers government increasing ways to track and spy on citizens.  The Washington Post reported there are 3,984 federal, state and local organizations working on domestic counterterrorism.  Most collect information on people in the US. (Source)

Here are thirteen examples of how some of the biggest government agencies and programs track people.

One.  The National Security Agency (NSA) collects hundreds of millions of emails, texts and phone calls every day and has the ability to collect and sift through billions more.  WIRED just reported NSA is building an immense new data center which will intercept, analyze and store even more electronic communications from satellites and cables across the nation and the world.  Though NSA is not supposed to focus on US citizens, it does. (Source)

Three.  The American Civil Liberties Union and the New York Times recently reported that cellphones of private individuals in the US are being tracked without warrants by state and local law enforcement all across the country.  With more than 300 million cellphones in the US connected to more than 200,000 cell phone towers, cellphone tracking software can pinpoint the location of a phone and document the places the cellphone user visits over the course of a day, week, month or longer. (Source)

Four.  More than 62 million people in the US have their fingerprints on file with the FBI, state and local governments.  This system, called the Integrated Automated Fingerprint Identification System (IAFIS), shares information with 43 states and 5 federal agencies.   This system conducts more than 168,000 checks each day. (Source)

Five.  Over 126 million people have their fingerprints, photographs and biographical information accessible on the US Department of Homeland Security Automated Biometric Identification System (IDENT).  This system conducts about 250,000 biometric transactions each day.  The goal of this system is to provide information for national security, law enforcement, immigration, intelligence and other Homeland Security Functions. (Source)

Eight.  Information on more than 2 million people is kept in the Intelligence Community Security Clearance Repository, commonly known as Scattered Castles.  Most of the people in this database are employees of the Department of Defense (DOD) and other intelligence agencies. (Source)

Ten.  Information on over 740,000 people is included in the Terrorist Identities Datamart Environment (TIDE) of the National Counterterrorism Center.  TIDE is the US government central repository of information on international terrorist identities.  The government says that less than 2 percent of the people on file are US citizens or legal permanent residents.  They were just given permission to keep their non-terrorism information on US citizens for a period of five years, up from 180 days. (Source)

Eleven.  Tens of thousands of people are subjects of facial recognition software.  The FBI has been working with North Carolina Department of Motor Vehicles and other state and local law enforcement on facial recognition software in a project called “Face Mask.”  For example, the FBI has provided thousands of photos and names to the North Carolina DMV which runs those against their photos of North Carolina drivers.  The Maricopa Arizona County Sheriff’s Office alone records 9,000 biometric mug shots a month. (Source)

Twelve.  The FBI operates the Nationwide Suspicious Activity Reporting Initiative (SAR) that collects and analyzes observations or reports of suspicious activities by local law enforcement.   With over 160,000 suspicious activity files, SAR stores the profiles of tens of thousands of Americans and legal residents who are not accused of any crime but who are alleged to have acted suspiciously. (Source)

Thirteen.  The FBI admits it has about 3,000 GPS tracking devices on cars of unsuspecting people in the US right now, even after the US Supreme Court decision authorizing these only after a warrant for probable cause has been issued. (Source)

The technology for tracking and identifying people is exploding as is the government appetite for it.

Soon, police everywhere will be equipped with handheld devices to collect fingerprint, face, iris and even DNA information on the spot and have it instantly sent to national databases for comparison and storage.

The advanced technology of the war on terrorism, combined with deferential courts and legislators, have endangered both the right to privacy and the right of people to be free from government snooping and tracking.  Only the people can stop this.