Thomas Ryan: The Guy Who Snitched on Occupy Wall Street to the FBI and NYPD 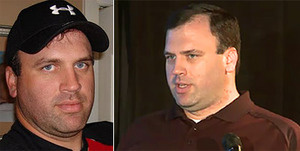 The Occupy Wall Street protests have been going on for a month. And it seems the FBI and NYPD have had help tracking protesters’ moves thanks to a conservative computer security expert who gained access to one of the group’s internal mailing lists,and then handed over information on the group’s plans to authorities and corporations targeted by protesters.

Since the Occupy Wall Street protest began on September 17, New York security consultant Thomas Ryan has been waging a campaign to infiltrate and discredit the movement. Ryan says he’s done contract work for the U.S. Army and he brags on his blog that he leads “a team called Black Cell, a team of the most-highly trained and capable physical, threat and cyber security professionals in the world.” But over the past few weeks, he and his computer security buddies have been spending time covertly attending Occupy Wall Street meetings, monitoring organizers’ social media accounts, and hanging out with protesters in Lower Manhattan.

What may much more alarming to Occupy Wall Street organizers is that while Ryan was monitoring September17discuss, he was forwarding interesting email threads to contacts at the NYPD and FBI, including special agent Jordan T. Loyd, a member of the FBI’s New York-based cyber security team.

On September 18th, the day after the protest’s start, Ryan forwarded an email exchange between Occupy Wall Street organizers to Loyd. The email exchange is harmless: Organizers discuss how they need to increase union participation in the protest. “We need more outreach to workers. The best way to do that is by showing solidarity with them,” writes organizer Jackie DiSalvo in the thread. She then lists a group of potential unions to work with.

Five minutes after Conor sent his email, Ryan forwarded the thread—with no additional comment—to Loyd’s FBI email address. “Thanks!” Loyd responded. He cc’d his colleague named Ilhwan Yum, a fellow cybersecurity expert at the agency, on the reply.

On September 26th, Ryan forwarded another email thread to Agent Loyd. But this time he clued in the NYPD as well, sending the email to Dennis Dragos, a detective with the NYPD Computer Crimes Squad.

The NYPD might have been very grateful he did so, since it involved a proposed demonstration outside NYPD headquarters at 1 Police Plaza. In the thread, organizers debated whether to crash an upcoming press conference planned by marijuana advocates to celebrate NYPD commissioner Ray Kelly ordering officers to halt arrests over possession of small amounts of marijuana.

“Should we bring some folks from Liberty Plaza to chant “SHAME” for the NYPD’s recent brutalities on Thursday night for the Troy Davis and Saturday for the Occupy Wall Street march?” asked one person in the email thread. (That past Saturday, the video of NYPD officer Anthony Bologna pepper-spraying a protester had gone viral.) Ryan promptly forwarded the email thread to Loyd at the FBI and Dragos at the NYPD.

Interestingly, it was Ryan who revealed himself as a snitch. We learned of these emails from the archive Ryan leaked yesterday in the hopes of undermining the Occupy Wall Street movement. In assembling the archive of September17discuss emails, it appears he accidentally included some of his own forwarded emails indicating he was ratting out organizers.

“I don’t know, I just put everything I had into one big package,” Ryan said when asked how the emails ended up in the file posted to Andrew Breitbart’s blog. Some security expert.

But Ryan didn’t just tip off the authorities. He was also giving information to companies as well. When protesters discussed demonstrating in front of morning shows like Today and Good Morning America, Ryan quickly forwarded the thread to Mark Farrell, the chief security officer at Comcast, the parent company of NBC Universal.

Since you are the CSO, I am not sure of your role in NBC since COMCAST owns them.
There is a huge protest in New York call “Occupy Wall Street”. Here is an email of stunts that they will try to pull on the TODAY show.

We have been heavily monitoring Occupy Wall Street, and Anonymous.

“Thanks Tom,” Farrell responded. “I’ll pass this to my counterpart at NBCU.”

Did the FBI and/or NYPD ask him to monitor Occupy Wall Street? Was he just forwarding the emails on out of the goodness of his heart? In a phone interview with us, Ryan denied being an informant. “I do not work with the FBI,” he said.

Ryan said he knows Loyd through their mutual involvement in the Open Web Application Security Project, a non-profit computer security group of which Ryan is a board member. Ryan said he sent the emails to Loyd unsolicited simply because “everyone’s curious” about Occupy Wall Street, and he had a ground-eye view. “Jordan never asked me for anything.”

Was he sending every email he got to the authorities? Ryan said he couldn’t remember how many he’d passed on to the FBI or NYPD, or other third parties. Later he said that he only forwarded the two emails we noticed, detailed above.

But even if he’d been sending them on regularly, they were probably of limited use to the authorities. Most of the real organizing at Occupy Wall Street happens face-to-face, according to David Graeber, who was one of the earliest organizers. “We did some practical work on [the email list] at first—I think that’s where I first proposed the “we are the 99%” motto—but mainly it’s just an expressive forum,” he wrote in an email. “No one would seriously discuss a plan to do something covert or dangerous on such a list.”

But regardless of how many emails Ryan sent—or whether Loyd ever asked Ryan to spy on Occupy Wall Street—Loyd was almost certainly interested in the emails he received. Loyd has helped hunt down members of the hacktivist collective Anonymous, and he and his colleagues in the FBI’s cyber security squad have been monitoring their involvement in Occupy Wall Street.

At a New York cyber security conference one day before the protest began, Loyd cited Occupy Wall Street as an example of a “newly emerging threat to U.S. information systems.” (In the lead-up to Occupy Wall Street, Anonymous had issued threats against the New York Stock Exchange.) He told the assembled crowd the FBI has been “monitoring the event on cyberspace and are preparing to meet it with physical security,” according to a New York Institute of Technology press release.

We contacted Loyd to ask about his relationship with Ryan and if any of the information Ryan passed along was of any use to the agency. He declined to answer questions and referred us to the FBI’s press office. We’ll post an update if we hear back from them.

We asked Ryan again this morning about how closely he was working with the authorities. Again, he claimed it was only these two emails, which is unlikely given he forwarded them to the FBI and NYPD without providing any context or explaining where he’d gotten them.

And he detailed his rationale for assisting the NYPD:

Don’t you find it Ironic that out of all the NYPD involved with the protest, [protesters] have only targeted the ones with Black Ribbons, given to them for their bravery during 9/11?

I am sorry if we see things differently, I try to look at everything as a whole and in patterns. Everything we do in life and happens in life, there is a pattern behind it.