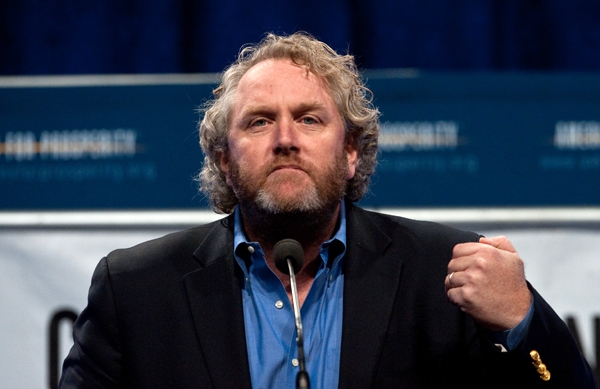 Veteran Los Angeles coroner forensic technican Michael Cormier had died, apparently due to arsenic poisoning. The 61 year old Cormier was discovered dead on April 20th – the same day the city officials had released their preliminary autopsy report on the death of conservative media powerhouse Andrew Breitbart.
According to early reports, Michael Cormier was “seemingly healthy,” yet “suddenly stricken” with a fatal condition – just like Andrew Breitbart.

It’s the latest twist in the case of Andrew Breitbart’s untimely death that will surely fuel increased speculation into possible foul play – in both cases.

The sluggish release of the Breitbart autopsy follows the unorthodox, rushed announcement by city authorities at the time of Breitbart’s death that he had died of ‘natural causes’ on March 1, 2012 at the age of 43.

The timing of Breitbart’s death came on the eve of a few highly anticipated events. Firstly, he had announced that he would be releasing rare ‘game changing’, rather damning video footage of President Obama allegedly cavorting with communist activists years earlier. Some footage was released in the days after his death, but it is not believed to be material that would change the corse of the 2012 election as Breitbart had indicated beforehand. He was also due to reveal his new Breitbart.com format, and had met only one before his death with Sheriff Joe Arpaio’s Cold Case Posse team in Phoenix in relation to Obama’s forged PDF birth certificate and forged US Selective Service registration card.

The LA County Coroner’s office announced in their preliminary report that Breitbart had died of heart failure, and that a negligible amount of alcohol was found in his system. No prescription or illicit drugs were discovered at any point during the autopsy. The final, definitive medical explaination on Breitbart’s death has yet to be made public.

Coroner Michael Cormier’s mysterious death was first reported by KTLA TV reporter Elizabeth Espinosa explaining how city detectives were investigating a possible ‘arsenic poisoning’ in the case. This report was later picked up and reported in an LA Times Local blog:

“The sources, who spoke on the condition of anonymity, said that finding the presence of poison does not necessarily mean the death was a homicide, because the substance could have accidentally entered his system.”

“At this point we haven’t ruled out foul play,” said Lt. Alan Hamilton of the Los Angeles Police Department. “It is one of the things being considered. We are waiting for the coroner’s results.”

A toxicology report is expected to be released sometime between May 25th and June 1st.

Matt Drudge paid tribute to his colleague and friend with a posting on the Drudge Report: “In the first decade of the DRUDGEREPORT Andrew Breitbart was a constant source of energy, passion and commitment. We shared a love of headlines, a love of the news, an excitement about what’s happening. I don’t think there was a single day during that time when we did not flash each other or laugh with each other, or challenge each other. I still see him in my mind’s eye in Venice Beach, the sunny day I met him. He was in his mid 20′s. It was all there. He had a wonderful, loving family and we all feel great sadness for them today.”