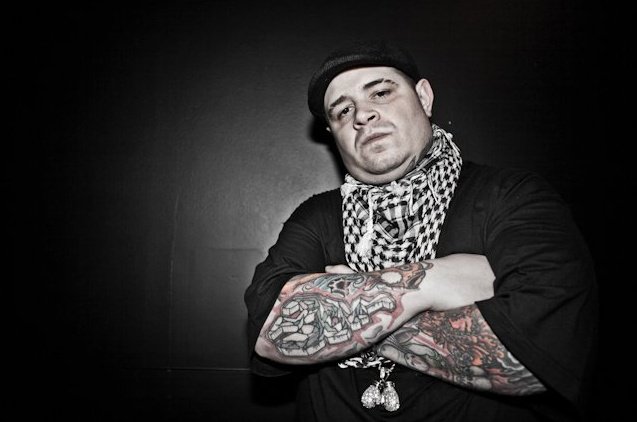 Vincenzo Luvineri (born October 5, 1977), better known as Vinnie Paz (formerly known as Ikon the Verbal Hologram), is an Italian-American rapper and the lyricist behind the Philadelphia underground hip hop group Jedi Mind Tricks. He is also the frontman of the hip hop supergroup Army of the Pharaohs.[1]

Paz is known for his raw and gritty lyrical delivery. His lyrics frequently contain references to religion, war, politics, mythology, conspiracy theories, and the paranormal.[2] His more recent albums such as Servants in Heaven Kings in Hell show a more obvious approach to politics and world issues. This gritty style of Paz became apparent with the release of Violent by Design, and has become progressively more defined since its release. Vinnie Paz has a number of aliases, such as: Ikon the Verbal Hologram, Louie Doggs, Boxcutter Pazzy, Hologram, Paz, Vinnie P, The Pazmanian Devil, Ikon The Python, and Pazienza. Raised Catholic, Vinnie Paz is now a Muslim, which plays a major role in much of his lyrics, often controversially, as on Heavenly Divine, where he rapped “I’m with Allah ’cause he chose me, I broke into the Vatican, strangled The Popewith his rosary.”[3] Vinnie is also a heavy metal fan, and occasionally uses song titles and band names in JMT tracks and lyrics.