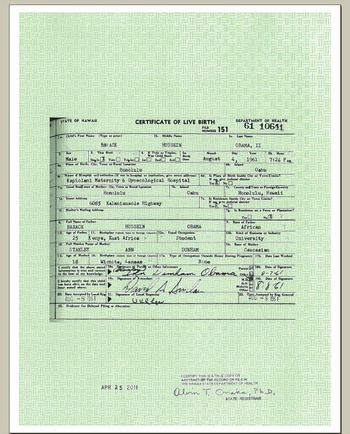 “Certificate of Live Birth” released in April by the White House as “proof positive” of President Obama’s Hawaiian birth is a forgery, but the FBI is covering the fraud and no one in Congress is willing to tackle the situation because of fears of a “black backlash” if the failings of the nation’s first black president are revealed.

In an interview today with Greg Corombos for WND, Vallely, who previously has expressed concerns about whether the Obama administration is in violation of the U.S. Constitution, said, “His actual birth certificate has never been found in Hawaii nor released from Hawaii hospital there, Kapiolani hospital there, if it in fact did exist.”

“We’ve had three CIA agents, retired, and some of their analytical associates look at it, and all came to the same conclusion, that even the long-form was a forged document,” Vallely said.

Get the New York Times best-seller “Where’s the Birth Certificate? The Case that Barack Obama Is Not Eligible to be President,” autographed by Jerome Corsi, Ph.D.

“No members of Congress will take this on. The word I get out of Washington is that they don’t want to challenge this because it would be in fact a felony offense and in some cases may be even treasonous and [they are] afraid of a black backlash from some of the urban areas,” Vallely said.

“But that’s a very poor excuse for not taking necessary steps to make sure this president in fact is a legitimate president under Article 2 and he is a born U.S. citizen.”

The departments of government designed to uncover wrongdoing, in this case, are on the wrong side, he said.

The questions over Obama’s eligibility to occupy the Oval Office under the requirements in the Constitution that call for a “natural born citizen” have been raised since before he was elected.

Numerous lawsuits have been filed and challenges organized but none have uncovered Obama’s documentation. For most of the past few years, his supporters relied on an online image of a Hawaiian short-form “Certification of Live Birth” as proof of his Hawaiian birth, claiming it was the only documentation available from the state.

However, just as the New York Times best-seller, “Where’s the Birth Certificate: The Case that Barack Obama is not Eligible to be President,” by Jerome Corsi, Ph.D., was about to be released, Obama dispatched a private attorney to Hawaii to fetch the supposed long-form “Certificate of Live Birth” and explained that the record now would include  the full documentation available from Hawaii.

The original hard-copy birth document, whatever it actually is, has never been seen by the public.

Corsi told WND, “The list is growing of those openly acknowledging the Obama long-form birth certificate released by the White House on April 27 is a forgery.

“That former CIA agents are beginning to weigh in on the White House forgery is important. Too many experts remain afraid to speak out about what is an obvious forgery, fearful that openly speaking out against Obama will hurt their income. That Gen. Vallely has now spoken out shows the cracks are widening around the White House façade that the Obama birth certificate is a legitimate document.”

He said, “Vallely is right in saying that millions of Americans are still trying to find out who Barack Obama is.

“The cover-up in Hawaii is still continuing. Every professional forensic document examiner knows the best evidence of the Obama long-form birth certificate is not the electronic Adobe file released on the White House website, but the original document the Hawaii DOH is still hiding in its vault, unwilling to let the public see it with their own eyes. Why won’t the White House allow a team of independent professional forensic document examiners inspect and authenticate the original birth certificate document? It makes no sense — unless of course there is no long-form birth certificate in the Hawaii DOH vault.”

When Obama released the purported long-form certificate, officials in the Hawaii Department of Health and governor’s office refused to simply confirm to WND that the image being presented by Obama was an accurate representation of the records maintained by the state.

Vallely said the document should “thoroughly be analyzed by resident FBI officials and analysts to determine if in fact and validate whether it’s forged or real.”

“One of the apparent flaws in that document was they listed Kenya as the place of birth of Obama’s father, but Kenya was not an established country at that time,” he noted.

“There’s still a lot of controversy about it, and some of us would just like to have this thing clearly authenticated.”

He also cited one of the many issues raised by document experts who have challenged the “birth certificate’s” authenticity – the layering in the Adobe computer file.

And Vallely said he knows some would not be satisfied with anything the Obama administration would release, which is a problem, in itself, for the White House.

“That’s true, because they don’t believe he is eligible. You have a fairly growing contingent out there.”

Vallely also made similar statements in an online radio program in which he supported Lakin, the Army doctor who refused orders because neither the military nor the White House would document Obama’s eligibility. He spent five months in Fort Leavenworth and only recently was released. His comments start at about 3:30 of the YouTube video:

There, Vallely said, “Obama’s birth certificate – I’ve had retired CIA agents and other investigators go over the birth certificate that was produced and by far, 10 out of 10 have said it’s a forgery. So we still have that corruptness going on in the White House. There’s a great number of organizations and people still trying to find out who Barack Obama is, where he was born, what his legitimacy is as president of the United States. We know for sure that the Constitution has been violated in Article 2, particularly when you look at the natural-born status.”

Only one day earlier, officials in the state of Hawaii claimed that the original of the Obama ‘birth certificate’ document – the document posted online by the White House – remains “confidential” and cannot be produced in response to a subpoena in a lawsuit over Obama’s legitimacy.

The image released by Obama has been challenged by a number of document imaging analysts as a fraud, and it doesn’t align with descriptions of it by Obama supporters.

For instance, two weeks before Obama finally released his “long-form birth certificate,” Hawaii’s former Health Department chief Chiyome Fukino – the one official who claimed to have examined the original birth document under lock and key in Hawaii – was interviewed by NBC News’ national investigative correspondent Michael Isikoff, who reported that Fukino told him she had seen the original birth certificate and that it was “half typed and half handwritten.”

However, the document released by the White House was entirely typed. Only the signatures and two dates at the very bottom were “handwritten.” What Fukino described apparently is a different document from what Obama released to the public