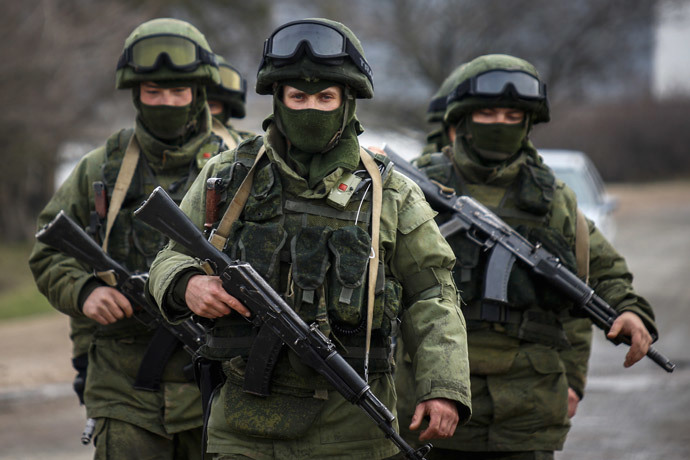 Videos have sprung on YouTube alleging that the US private security service formerly known as Blackwater is operating in the eastern Ukrainian city of Donetsk. Western press is hitting back, accusing Russia of fabricating reports to justify “aggression.”

The authenticity of videos allegedly made in downtown Donetsk on March 5 is hard to verify. In the footage, unidentified armed men in military outfits equipped with Russian AK assault rifles and American М4А1 carbines are securing the protection of some pro-Kiev activists amidst anti-government popular protests.

The regional administration building in Donetsk has changed hands many times, with either pro-Russian protesters or pro-Kiev forces declaring capture of the authority headquarters. In the logic of the tape, at some point the new officials appointed by revolutionary Kiev managed to occupy the administration, but then – as the building was surrounded by angry protesters – demanded to secure a safe evacuation.

This is where the armed professionals come in. The protesters, after several moments of shock, start shouting, “Blackwater!,” and “Mercenaries!,” as well as “Faggots!,” and “Who are you going to shoot at?!” But the armed men drive off in the blink of an eye without saying a word.

Surely these men were not Blackwater – simply because such a company does not exist anymore. It has changed its name twice in recent years and is now called Academi.

The latest article on the case, published by the Daily Mail, claims that though these people did look like professional mercenaries, they conducted the operation too openly.

“On the face of it, the uniforms of the people in the videos are consistent with US mercs – they don’t look like Russian soldiers mercs. On the other hand, why run around in public making a show of it?” said DM Dr Nafeez Ahmed, a security expert with the Institute for Policy Research & Development.

“I think the question is whether the evidence available warrants at least reasonable speculation.”

Ahmed also added that “Of course the other possibility is it’s all Russian propaganda.”

Why would Russia need to make such provocation? The Daily Mail explained that “any suggestion that a US mercenary outfit like Blackwater, known now as Academi, had begun operating in east Ukraine could give Russian President Vladimir Putin the pretext for a military invasion.”

Other western media outlets are maintaining that a “Russian invasion” has already began, because the heavily armed military personnel now controlling all major infrastructure in Crimea are “obviously” Russians.

Armed men march outside an Ukrainian military base in the village of Perevalnoye near the Crimean city of Simferopol March 9, 2014.(Reuters / Thomas Peter )

The Daily Beast media outlet went even further. On the last day of February, it published an article alleging that “polite Russians” in Crimea are actually…employees of Russian security service providers.

While there are indeed several military-oriented security service providers in Russia, it however appears highly unlikely that all of them combined could provide personnel for such a wide-scale operation.

At the beginning of the week, Russian state TV reported that several hundred armed men with military-looking bags arrived to the international airport of Kiev.

It was reported that the tough guys are employees of Greystone Limited, a subsidiary of Vehicle Services Company LLC belonging to Blackwater/XE/Academi.

Greystone Limited mercenaries are part of what is called ‘America’s Secret Army,’ providing non-state military support not constrained by any interstate agreements, The Voice of Russia reported.

But they are not the only ones. A Russian national that took part in clashes in Kiev was arrested in Russia’s Bryansk region this week. He made a statement on record that he met a large number of foreigners taking active part in the fighting with police.

He claimed he saw dozens of military-clad people from Germany, Poland, and Turkey, as well as English speakers who were possibly from the US, Russkaya Gazeta reported earlier this week.