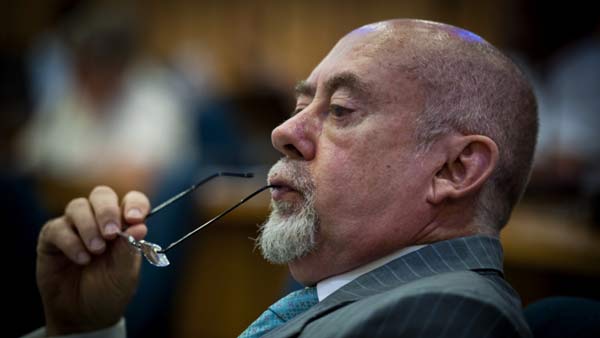 Following leads on the anthrax trail took us across four continents – filming outside the high security perimeter fences of some of the world’s most secret germ war labs (and inside a couple), tracking down and talking to experts and scientists some of whom were members of the so called “International Bio-Weapons Mafia”. None was more chilling than the face to face we got with the man they call Doctor Death – Wouter Basson, the army scientist who headed apartheid South Africa’s secret germ war program – Project Coast.

Shrouded in mystery and hidden behind front companies that used worldwide intelligence connections, the shocking activities of the program only emerged after the fall of apartheid – revealing a shockingly sophisticated operation that had 200 scientists developing germ war agents to be used against the country’s black population.

This was one of the very few interviews Doctor Death has given and for the first time he talks candidly about the help the received from the West, his relationship with David Kelly and the creation of “the Black Bomb” an agent that could sterilize blacks without their knowledge.

And then there’s his strange relationship with Larry Ford, the Mormon gynecologist to Hollywood stars who was also moonlighting for the South Africans and had CIA connections.

Operating out of South Africa during the Apartheid era in the early 1980’s, Dr. Wouter Basson launched a secret bioweapons project called Project Coast. The goal of the project was to develop biological and chemical agents that would either kill or sterilize the black population and assassinate political enemies. Among the agents developed were Marburg and Ebola viruses.

Basson is surrounded by cloak and dagger intrigue, as he told Pretoria High court in South Africa that “The local CIA agent in Pretoria threatened me with death on the sidewalk of the American Embassy in Schoeman Street.” According to a 2001 article in The New Yorker magazine, the American Embassy in Pretoria was “terribly concerned” that Basson would reveal deep connections between Project Coast and the United States.

In 2013, Basson was found guilty of “unprofessional conduct” by the South African health council.

Bioweapons expert Jeanne Guillemin writes in her book Biological Weapons: From the Invention of State-Sponsored Programs to Contemporary Bioterrorism, “The project‘s growth years were from 1982 to 1987, when it developed a range of biological agents (such as those for anthrax, cholera, and the Marburg and Ebola viruses and for botulinum toxin)…“

Basson’s bioweapons program officially ended in 1994, but there has been no independent verification that the pathogens created were ever destroyed. The order to destroy them went directly to Dr. Basson. According to the Wall Street Journal, “The integrity of the process rested solely on Dr. Basson’s honesty.”

Basson claims to have had contact with western agencies that provided “ideological assistance” to Project Coast. Basson stated in an interview shot for the documentary Anthrax War that he met several times with Dr. David Kelly, the infamous UN weapons inspector in Iraq. Kelly was a top bioweapons expert in the United Kingdom. He was found dead near his home in Oxfordshire in 2003. While the official story claims he committed suicide, medical experts highly doubt this story.

In a 2007 article from the Mail Online, it was reported that a week prior to his death, Dr. Kelly was to be interviewed by MI5 about his ties to Dr. Basson.

Dr. Timothy Stamps, Minister of Health of Zimbabwe, suspected that his country was under biological attack during the time that Basson was operating. Stamps told PBS Frontline in 1998 that “The evidence is very clear that these were not natural events. Whether they were caused by some direct or deliberate inoculation or not, is the question we have to answer.”

Stamps specifically named the Ebola and Marburg viruses as suspect. Stamps thinks that his country was being used as a testing ground for weaponized Ebola.

“I’m talking about anthrax and cholera in particular, but also a couple of viruses that are not endemic to Zimbabwe [such as] the Ebola type virus and, we think also, the Marburg virus. We wonder whether in fact these are not associated with biological warfare against this country during the hostilities…Ebola was along the line of the Zambezi [River], and I suspect that this may have been an experiment to see if a new virus could be used to directly infect people.”

The Ghanaian Times reported in early September on the recent Ebola outbreak, noting connections between Basson and bioweapons research. The article points out that, “…there are two types of scientists in the world: those who are so concerned about the pain and death caused to humans by illness that they will even sacrifice their own lives to try and cure deadly diseases, and those who will use their scientific skill to kill humans on the orders of… government…”

Indeed, these ideas are not new. Plato wrote over 2,000 years ago in his work The Republic that a ruling elite should guide society, “…whose aim will be to preserve the average of population.” He further stated, “There are many other things which they will have to consider, such as the effects of wars and diseases and any similar agencies, in order as far as this is possible to prevent the State from becoming either too large or too small.”

As revealed by The Age, Nobel prize winning Australian microbiologist Sir Macfarlane Burnet secretly urged the Australian government in 1947 to develop bio weapons for use against the “overpopulated countries of South-East Asia.” In a 1947 meeting with the New Weapons and Equipment Development Committee, the group recommended that “the possibilities of an attack on the food supplies of S-E Asia and Indonesia using B.W. agents should be considered by a small study group.”

This information gives us an interesting perspective on the recent unprecedented Ebola outbreak. Is it an organic natural phenomenon? Did this strain of Ebola accidentally escape from a bioweapons lab? Or, was it deliberately released?