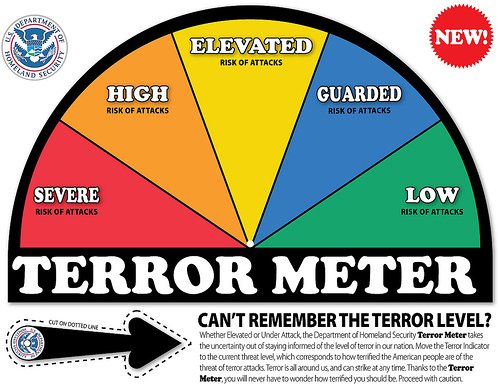 The FBI has received substantial criticism over the past decade — much of it valid — but nobody can deny its record of excellence in thwarting its own Terrorist plots.  Time and again, the FBI concocts a Terrorist attack, infiltrates Muslim communities in order to find recruits, persuades them to perpetrate the attack, supplies them with the money, weapons and know-how they need to carry it out — only to heroically jump in at the last moment, arrest the would-be perpetrators whom the FBI converted, and save a grateful nation from the plot manufactured by the FBI.

Last year, the FBI subjected 19-year-old Somali-American Mohamed Osman Mohamud to months of encouragement, support and money and convinced him to detonate a bomb at a crowded Christmas event in Portland, Oregon, only to arrest him at the last moment and then issue a Press Release boasting of its success.  In late 2009, the FBI persuaded and enabled Hosam Maher Husein Smadi, a 19-year old Jordanian citizen, to place a fake bomb at a Dallas skyscraper and separately convinced Farooque Ahmed, a 34-year-old naturalized American citizen born in Pakistan, to bomb the Washington Metro.  And now, the FBI has yet again saved us all from its own Terrorist plot by arresting 26-year-old American citizen Rezwan Ferdaus after having spent months providing him with the plans and materials to attack the Pentagon, American troops in Iraq, and possibly the Capitol Building using “remote-controlled” model airplanes carrying explosives.

None of these cases entail the FBI’s learning of an actual plot and then infiltrating it to stop it.  They all involve the FBI’s purposely seeking out Muslims (typically young and impressionable ones) whom they think harbor animosity toward the U.S. and who therefore can be induced to launch an attack despite having never taken even a single step toward doing so before the FBI targeted them.  Each time the FBI announces it has disrupted its own plot, press coverage is predictably hysterical (new Homegrown Terrorist caught!), fear levels predictably rise, and new security measures are often implemented in response (the FBI’s Terror plot aimed at the D.C. Metro, for instance, led to the Metro Police announcing a new policy of random searches of passengers’ bags).   I have several observations and questions about these matters:

(1) The bulk of this latest FBI plot entailed attacks on military targets: the Pentagon, U.S. troops in Iraq, and possibly military bases.  The U.S. is — as it has continuously announced to the world — a Nation at War.  The Pentagon is the military headquarters for this war, and its troops abroad are the soldiers fighting it.  In what conceivable sense can attacks on those purely military and war targets be labeled “Terrorism” or even illegitimate?  The U.S. has continuously attacked exactly those kinds of targets in multiple nations around the world; it expressly tried to kill Saddam and Gadaffi in the wars against their countries (it even knowingly blew up an entire suburban apartment building to get Saddam, who wasn’t actually there).   What possible definition of “Terrorism” excludes those attacks by the U.S. while including this proposed one on the Pentagon and other military targets (or, for that matter, Nidal Hasan’s attack on Fort Hood where soldiers deploy to war zones)?

(2) With regard to the targeted building that is not purely a military target — the Capitol Building — is that a legitimate war target under the radically broad standards the U.S. and its allies have promulgated for itself?  The American “shock and awe” assault on Baghdad destroyed “several government buildings and palaces built by Saddam Hussein”; on just the third day of that war, “U.S. bombs turn[ed] key government buildings in Baghdad into rubble.”  In Libya, NATO repeatedly bombed non-military government buildings.  In Gaza, Israeli war planes targeted a police station filled with police recruits on the stated theory that a valid target “ranges from the strictly military institutions and includes the political institutions that provide the logistical funding and human resources” to Hamas.

Obviously, there is a wide range of views regarding the justifiability of each war, but isn’t the U.S. Congress — which funds, oversees, and regulates America’s wars — a legitimate war target under the (inadvisedly) broad definitions the U.S. and its allies have imposed when attacking others?  If the political leaders and even functionaries of other countries with which the U.S. is at war are legitimate targets, then doesn’t that necessarily mean that Pentagon officials and, arguably, those in the Congress are as well?

(3) The irony that this plot featured “remote-controlled aircraft filled with plastic explosives” is too glaring to merit comment; the only question worth asking is whether the U.S. Government can sue Ferdaus for infringing its drone patents.  Glaring though that irony is, there is no shortage of expressions of disgust today, pondering what kind of Terrorist monster does it take to want to attack buildings with remote-controlled mini-aircraft.

(4) Wouldn’t the FBI’s resources be better spent on detecting and breaking up actual Terrorist plots — if there are any — rather than manufacturing ones so that they can stop those?  Harboring hatred for the U.S. and wanting to harm it (or any country) is not actually a crime; at most, it’s a Thought Crime.  It doesn’t become a crime until steps are taken to attempt to transform that desire into reality.  There are millions and millions of people who at some point harbor a desire to impose violent harm on others who never do so: perhaps that’s true of a majority of human beings.  Many of them will never act in the absence of the type of highly sophisticated, expert push of which the FBI is uniquely capable.  Is manufacturing criminals — as opposed to finding and stopping actual criminals — really a prudent law enforcement activity?

(5) Does the FBI devote any comparable resources to infiltrating non-Muslim communities in order to persuade and induce those extremists to become Terrorists so that they can arrest them?  Are they out in the anti-abortion world, or the world of radical Christianity, or right-wing anti-government radicals, trying to recruit them into manufactured Terrorist plots?

(6) As usual, most media coverage of the FBI’s plots is as uncritical as it is sensationalistic.  The first paragraph of The New York Times article on this story described the plot as one “to blow up the Pentagon and the United States Capitol.”  But the FBI’s charging Affidavit (reproduced below) makes clear that Ferdaus’ plan was to send a single model airplane (at most 1/10 the size of an actual U.S. jet) to the Capitol and two of them to the Pentagon, each packed with “5 pounds” of explosives (para. 70); the Capitol was to be attacked at its dome for “psychological effect” (para 34).  The U.S. routinely drops 500-pound or 1,000-pound bombs from actual fighter jets; this plot — even if it were carried out by someone other than a hapless loner with no experience and it worked perfectly — could not remotely “blow up” the Pentagon or the Capitol.

(7) As is now found in almost every case of would-be Terrorist plots against the U.S. — especially “homegrown Terrorists” — the motive is unbridled fury over (and a desire to avenge) contintuous U.S violence against Muslim civilians.  Infused throughout the charging Affidavit here are such references to Ferdaus’ motives, including his happiness over the prospect of killing U.S. troops in Iraq; his proclamation that he’s “interested in traveling to Afghanistan” to aid insurgents; his statement that “he wanted to ‘decapitate’ the U.S. government’s ‘military center’ and to severely disrupt . . . the head and heart of the snake” (para 12) and to “essentially decapitate the entire empire” (para 34) (compare that language to how the U.S. described what it tried to do in Baghdad).  At least according to the FBI, this is how Feradus replied when expressly asked why he wanted to attack the U.S.:

If the FBI’s allegations are accurate, then it’s clear Ferdaus has become hardened in his hatred; he talks about a willingness to kill American civilians because they have become part of the enemy, and claims that he fantasized about such attacks before the FBI informant spoke to him.

But whatever else is true,  it’s simply unrealistic in the extreme to expect to run around for a full decade screaming WE ARE AT WAR!! — and dropping bombs and attacking with drones and shooting up families in multiple Muslim countries (and occupying, interfering in and killing large numbers before that) – and not produce many Rezwan Ferdauses.  In fact, the only surprising thing is that these seem to be so few of them actually willing and able to attack back that — in order to justify this Endless War on civil liberties (and Terror)  — the FBI has to search for ones they can recruit, convince, and direct to carry out plots.