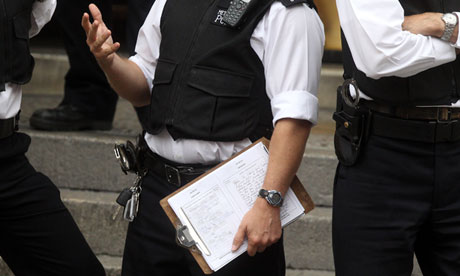 Handwritten note detailing Met police strategy suggests there should be no escape, no matter how he leaves embassy

A police officer holds notes on Julian Assange’s exile at the Ecuadorean embassy in London. The left side of the document has been pixellated due to sensitive information. Photograph: Lewis Whyld/PA

It is the “restricted” official document that sums up the Metropolitan police‘s tactics towards Julian Assange. “Action required: Assange to be arrested under all circumstances,” says the handwritten note that was photographed under a policeman’s arm on Friday detailing a “summary of the current position” on Assange’s exile inside the Ecuadorean embassy in Knightsbridge.

It is no surprise that a fugitive from a European arrest warrant that demands removal to Sweden to face allegations of rape and sexual assault should face such a fate. Police officers are stationed right up against the front and back of the embassy where Assange has sought sanctuary and he recently claimed to have heard them “swarming” behind the fire escape.

There should be no escape, the note suggests, ordering that Assange is arrested if “he comes out with dip [presumably a diplomat] … as dip bag [which allows immunity from search for diplomatic communications, and which could be as large as a suitcase, crate or even a shipping container], in dip car …. in dip vehicle.”

The note mentions “SS10 to liaise”. The Met police press office said it had no idea what this might mean. Could it be a misspelling of SO10, the colloquial name for the Met’s covert operations group? The later mention of SO20 suggests what Assange and his supporters have always feared: that the western powers that WikiLeaks has done so much to embarrass might consider him some sort of terrorist. SO20 is the Met’s counter-terrorism protective security command.