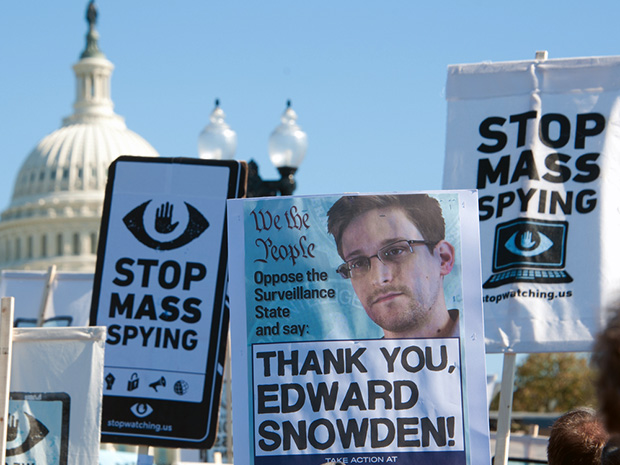 The black sweatshirt sold by the civil libertarian Electronic Frontier Foundation featured a parody of the National Security Agency’s logo, with the traditional key in an eagle’s claws replaced by a collection of AT&T cables, and eavesdropping headphones covering the menacing bird’s ears. Snowden wore it regularly to stay warm in the air-conditioned underground NSA Hawaii Kunia facility known as “the tunnel.”

His coworkers assumed it was meant ironically. And a geek as gifted as Snowden could get away with a few irregularities.

Months after Snowden leaked tens of thousands of the NSA’s most highly classified documents to the media, the former intelligence contractor has stayed out of the limelight, rarely granting interviews or sharing personal details. A 60 Minutes episode Sunday night, meanwhile, aired NSA’s officials descriptions of Snowden as a malicious hacker who cheated on an NSA entrance exam and whose work computers had to be destroyed after his departure for fear he had infected them with malware.

But an NSA staffer who contacted me last month and asked not to be identified–and whose claims we checked with Snowden himself via his ACLU lawyer Ben Wizner—offered me a very different, firsthand portrait of how Snowden was seen by his colleagues in the agency’s Hawaii office: A principled and ultra-competent, if somewhat eccentric employee, and one who earned the access used to pull off his leak by impressing superiors with sheer talent.

The anonymous NSA staffer’s priority in contacting me, in fact, was to refute stories that have surfaced as the NSA and the media attempt to explain how a contractor was able to obtain and leak the tens of thousands of highly classified documents that have become the biggest public disclosure of NSA secrets in history. According to the source, Snowden didn’t dupe coworkers into handing over their passwords, as one report has claimed. Nor did Snowden fabricate SSH keys to gain unauthorized access, he or she says.

Instead, there’s little mystery as to how Snowden gained his access: It was given to him.

“That kid was a genius among geniuses,” says the NSA staffer. “NSA is full of smart people, but anybody who sat in a meeting with Ed will tell you he was in a class of his own…I’ve never seen anything like it.”

When I reached out to the NSA’s public affairs office, a spokesperson declined to comment, citing the agency’s ongoing investigation into Snowden’s leaks.

But over the course of my communications with the NSA staffer, Snowden’s former colleague offered details that shed light on both how Snowden was able to obtain the NSA’s most secret files, as well as the elusive 30-year old’s character: