Afghan Corruption, and How the U.S. Facilitates It 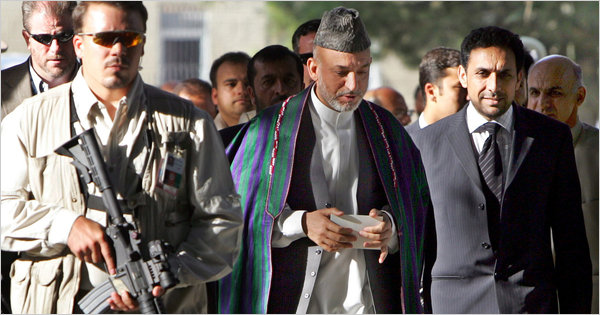 When it comes to corruption in Afghanistan, the time may be now for the United States to look in the mirror and see what lessons can be learned from contracting out parts of that war.

On Sept. 30, Afghan President Hamid Karzai told CBS’s “60 Minutes” that the corruption wracking his government and its people has been at a level “not ever before seen in Afghanistan.”

In the 1980s, when the Soviets ran the country, the government was “not even 5 percent as corrupt,” Karzai said.

“ The Soviets didn’t give contracts to the relatives, brothers and the kin of the influential and high ups,” he said. “The Americans did, and they continue to do, but we get blamed for it.”

It’s easy to disregard what Karzai told CBS. He has often blamed the United States and its allies for corrupting his country and certainly will again. And his complaint about U.S. contracts going to relatives of influential Afghans rings hollow when you go down the list that includes many members of his own family as well as cabinet ministers.

But the record shows Karzai has a point with which others agree.

“It is time that we as Americans — in government, in the media, and as analysts and academics — took a hard look at the causes of corruption in Afghanistan. The fact is that we are at least as much to blame for what has happened as the Afghans, and we have been grindingly slow to either admit our efforts or correct them.”

That was written in September 2010 by Anthony H. Cordesman, national security expert and a former Reagan Pentagon official, in a Center for Strategic and International Studies report, “How America Corrupted Afghanistan.”

Cordesman, who spent a good deal of time in Afghanistan, wrote: “We can probably do more to fight the worst causes of Afghan corruption by changing our own actions than by any amount of effort to encourage Afghan anti-corruption drives.”

He particularly criticized the military contracting process, saying, “The bulk of the money actually spent inside Afghanistan went through poorly supervised military contracts and through aid projects where the emphasis was speed, projected starts, and measuring progress in terms of spending rather than results.”

That process led to what Karzai is complaining about now — as Cordesman did two years ago. “U.S. and foreign contractors poured money into a limited number of Afghan powerbrokers who set up companies that were corrupt and did not perform. . . . In many cases, they also paid off insurgents to let them operate,” Cordesman wrote.

He suggested that the government “tightly control the influx of outside money, limit its flow to honest and capable Afghans at every level of government, and provide the transparency to allow Afghans to see how honestly and effectively the money is used.”

I thought of the 2010 Cordesman report last week after reading an interim report sent to Defense Secretary Leon E. Panetta and top Pentagon officers associated with Afghanistan. The report criticized how the U.S. military is preparing to turn over to the Afghan National Army the buying of petroleum, oil and lubricants that is estimated next year to involve $343 million in U.S taxpayer funds and another $123 million from international donors.

The funding is based on an estimate of the Afghan National Army’s needs. However, the report, by the Special Inspector General for Afghanistan Reconstruction (SIGAR), found that the program after transition will be “vulnerable to theft and waste” because the United States and its allies do not have a “valid method for estimating [Afghan army] fuel needs,” nor records on its past “fuel purchases, deliveries and consumption.”

Corruption was evident in the past when the United States supervised the buying and delivery of fuel in Afghanistan. John F. Sopko, the special inspector general, told a House Oversight subcommittee on Sept. 13 that fuel “is a valuable commodity that is vulnerable to theft.”

In June, two Army servicemen pleaded guilty in a plot to steal jet fuel from a base and getting $6,000 for clandestinely filling 3,000-gallon trucks owned by an Afghan contractor.

Sopko told the House panel that his office has 20 active criminal investigations looking into the theft and diversion of fuel or bribery or bid-rigging on fuel contracts involving more than $100 million.

Perhaps worse, the SIGAR inquiry found that U.S. coalition financial records covering $475 million in fuel purchases and payments from October 2006 to February 2011 had been shredded. This was done “in violation of DOD [Department of Defense] and Department of the Army policies,” according to the SIGAR report.

In addition, SIGAR auditors were not given half the records sought for the March 2011 to March 2012 period. And although June 2012 Afghan army fuel purchases and payments were reconciled, the command “still could not account for the amount of fuel delivered and consumed,” SIGAR said.

A July SIGAR report found that because the military command did not “file claims for damaged or missing equipment, it was providing fuel for vehicles that had been destroyed.”

Sopko said his audit found that in one case “as much as 1 million gallons of fuel had been stolen over a four-month period without causing any red flags to be raised in the system.”

Now, according to SIGAR, the U.S.-NATO command “does not have accurate or supportable information on how much U.S. funds are needed for ANA [Afghan National Army] fuel, where and how the fuel is actually used, or how much fuel has been lost or stolen.”

The command has taken actions “to improve controls over fuel purchases, vendor deliveries, and the payment of invoice amounts,” but SIGAR maintains there is still a need to ensure “all fuel activity is tracked and accounted for.”

There may be a history of corruption in Afghanistan, but the United States is continuing to create tempting, rich, new targets such as fuel, and apparently enough Americans are willing to join in the illegal action.