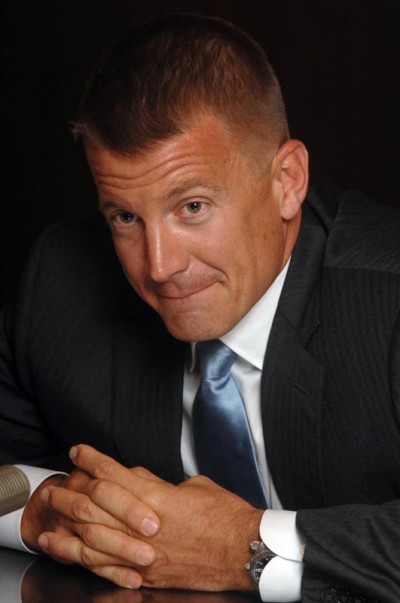 What’s Erik Prince been doing since he sold off Blackwater, the infamous mercenary company he founded and turned into a juggernaut of the private security world? His shadiest, most morally-compromised guns-for-hire scheme yet.

Prince moved to Abu Dhabi last year as legal and governmental scrutiny of Blackwater intensified. “I’m done. It’s all sold or shut down,” he told journalist Robert Young Pelton shortly before boarding his farewell flight. “I’m getting out of the government contracting business.” And provided he meant the U.S. government, that vow has stood the test of time. But his adoptive country is a different story.

Documents obtained by the New York Times indicate that Prince rebooted his efforts in private security to build a praetorian army of mercenaries for the ruling clique in the United Arab Emirates. His new company, Reflex Responses, hires a mixture of Colombian soldiers of fortune and South African vets of Executive Outcomes, the pre-Blackwater merc firm that fought nasty counter-guerilla wars in Angola and Sierra Leone. That’s right: forces from Christian nations hired to protect Muslim leaders, possibly against their own people. And in keeping with Prince’s history, if Reflex is doing business legally — from the perspective of U.S. law — it’s only barely so.

Prince, who conceals his involvement in the firm by using the codename “Kingfish,” takes money from the UAE to  ”conduct special operations missions inside and outside the country, defend oil pipelines and skyscrapers from terrorist attacks and put down internal revolts.” His take: $529 million so far, and the possibility of earning “billions more.” His contract with the UAE lasts until 2015.

The tiny UAE is a financial giant on the Persian Gulf, drenched in oil and unconcerned with political liberty for its wealthy citizens. It lives in fear of Iran. And its military keeps only about 65,000 men under arms. It’s had a murky interest in helping Somalia contain its piracy problem — another effort rumored to involve Prince. And so far, the Mideast uprisings haven’t touched the UAE, but you never know. Its ruling sheikhs are used to paying foreigners to do their dirty work: its labor force is imported. Now it prefers to apply that model to its security needs.

That’s where Prince comes in.

Under terms of Reflex’s contract with the consortium of monarchies, obtained by the Times, Prince will build, train and field a battalion of foreign auxiliaries “independent of formal command and support structures throughout the UAE.” They’re supposed to be for “internal” defense, conducting “cordon and search,” “stability and support operations” and general “security operations.” Only “leaders” of the force need be proficient in English; the contract doesn’t say anything about the mercs speaking Arabic.

Consider for a second that this is a force comprised of mercs from Christian countries operating on Islamic soil. The Executive Outcomes veterans — not exactly known for their subtlety; they were involved in a coup attempt in Equatorial Guinea — will staff a quick reaction force, able to seize key infrastructure and put down a protest that spins out of control. What could go wrong?

That’s a lot to ask of 800 people. It also begs the question of why the UAE would continue to invest in its elite military units, which have served in Afghanistan, when there’s this new hired Army to use.

The contract doesn’t specify what gear they’re going to use. But it’s going to need ships, helicopters, transport planes, communications gear, fuel depots or access to existing ones, a motor pool of trucks and, of course, guns. They’ve built a barracks in the desert to house and train the new Reflex force.

Because of all this gear and all this construction, it’s surprising that the effort — which the contract indicates began in June 2010 — stayed secret for this long. But it’s astonishing that someone leaked the Times the actual contract Reflex holds with the UAE. Is there internal dissent within Reflex already?

Prince’s new gig also might run afoul of U.S. laws prohibiting citizens from trailing foreign militaries. That kind of work requires a government license. The State Department wouldn’t say if Reflex has such a license, and told the Times it’s “investigating” to see if Reflex is on the right side of the law.

Blackwater, renamed Xe Services, ain’t what it used to be. While it’s still collecting government contracts to protect diplomats, it’s undergoing another rebranding effort by the new ownership, even hiring former U.S. attorney general John Ashcroft as its ethics chief. It wants to emphasize its business training law enforcement more than its guard duties — understandable, given that most people know Blackwater as the guard force that killed 17 Iraqi civilians in 2007.

Some aspects of Reflex make it seem like Prince is getting the old band back together. One of his top deputies is Ricky Chambers. Chambers, a former FBI agent, ran the Blackwater subsidiary Paravant — whose guards in Afghanistan signed for guns under the name “Eric Cartman” and shot Afghan civilians dead during a 2009 vehicle accident.

Mideast leaders are reeling from the reformist uprisings. So far, only Moammar Gadhafi has hired mercenaries to backstop his rule. And the UAE’s interest in Reflex predates the current Mideast uprisings. But while it might be crazy to hire South Africans and Columbians to break up protests by Muslims calling for democratic change, desperate autocrats have done far crazier things. They surely know how to get in touch with Erik Prince.