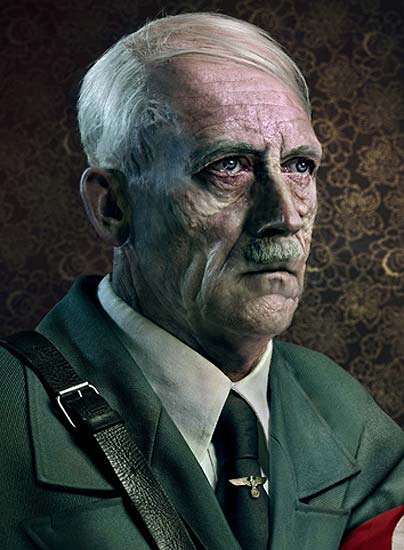 In the film Star Trek II, the crew of the Enterprise on a routine visit of a planet accidently ran into a villainous character named Khan. Captain James T. Kirk had earlier exiled the character Khan and his crew. Khan and his followers were genetically engineered humans that were associated with a World War on Earth, and they viewed themselves to be superior to non-genetically engineered humans. Khan was driven highly by ego and the pursuit of power and sought revenge against the Star Trek Crew.

Is it possible that Hitler is still alive and would like everyone to know this to demonstrate his superior intelligence like Khan, in being able to evade capture in World War II? Is it possible that an alive Hitler is fashioning himself up to be a “Khan-like” leader of a “superior race”.

If an alive Hitler wanted to conceal his affiliation to the Gulf Oil Spill, wouldn’t it be logical to use any day other than his birthday, that would end up having the same devastation? Is it possible that Hitler or perhaps his disciples sought to use his birthday as a mathematical starting point of pivotal events in a New World Order that he and his followers are seeking to avenge against America, in the spirit of ‘Khan’ against “The Federation”?

Reichstag fire, burning of the Reichstag (parliament) building in Berlin, on the night of Feb. 27, 1933, was a key event in the establishment of the Nazi dictatorship; and it has been widely suspected among historians, to have been ordered by Adolf Hitler. Hitler had originally blamed the event on “Communists and Jews”. Richard Dolan has referred to 9/11 as America’s version of the Reichstag Fire, and has detailed critical similarities between both events.

At the end of World War II, It is notable that the Allies were never able to prove Hitler was dead.

Some reports also allege that Adolf Hitler escaped capture by the U.S. and its Allies with the assistance of Manipulative Extraterrestrials. Indeed historical records affirm that Hitler was never found by the Allies. His suicide was originally concocted to quell mass concern that such an individual could have escaped to pursue another World War. Indeed, reports suggest that Nazis were preparing for World War III, before the dust had hardly settled with their “temporary setback” of World War II defeat.

In 1952, Dwight D. Eisenhower said: “We have been unable to unearth one bit of tangible evidence of Hitler’s death. Many people believe that Hitler escaped from Berlin.” When President Truman asked Joseph Stalin at the Potsdam conference in 1945 whether or not Hitler was dead, Stalin replied bluntly, ‘No.’ Stalin’s top army officer, Marshall Gregory Zhukov, whose troops were the ones to occupy Berlin, flatly stated after a long thorough investigation in 1945: “We have found no corpse that could be Hitler’s.”

The chief of the U.S. trial counsel at Nuremberg, Thomas J. Dodd, said: “No one can say he is dead.” Major General Floyd Parks, who was commanding general of the U.S. sector in Berlin, stated for publication that he had been present when Marshall Zhukov described his entrance to Berlin, and Zhukov stated he believed Hitler might have escaped. Lt. Gen. Bedell Smith, Chief of Staff to Gen. Eisenhower in the European invasion and later Director of the CIA, stated publicly on Oct. 12, 1945, “No human being can say conclusively that Hitler is dead.” Col. W. J. Heimlich, former Chief, United States Intelligence, at Berlin, stated for publication that he was in charge of determining what had happened to Hitler and after a thorough investigation his report was: “There was no evidence beyond that of HEARSAY to support the THEORY of Hitler’s suicide.” He also stated, “On the basis of present evidence, no insurance company in America would pay a claim on Adolph Hitler.”

An article in November, 1949, says “The Nazis went underground, May 16, 1943!” and details an alleged meeting at the residence of Krupp von Bohlen-Halbach, the head of I. G. Farben and agents said that in the aftermath of World War II, Nazis gone underground were planning for “for WORLD WAR III.” Another article in August, 1952, entitled “HITLER DID NOT DIE,” subtitled “Adolph Hitler’s fake suicide in his Berlin Bunker now is exposed as History’s greatest hoax! Positive evidence comes to light that Hitler did not die — here’s new evidence that Hitler is alive, directing [the] Nazi underground, today!”

On a Canadian Broadcasting Corporation program called “As It Happens,” September 17th, 1974 at 7:15 p.m., a Prof. Dr. Ryder Saguenay, oral surgeon from the Dental Faculty of the University of California at Los Angeles, said that Hitler had ordered a special plane to leave from Berlin with all medical and dental records, especially X-rays, of all top Nazis for an unknown destination. He said that the dental records used to identify Hitler’s body were drawn from MEMORY by a dental assistant, who reportedly disappeared and was never found.

The Jewish writer Michael Bar-Zohar in “The Avengers,” p. 99, said: “In 1943 Admiral Doenitz had declared: “The German U-boat fleet is proud to have made an earthly paradise, an impregnable fortress for the Fuhrer, somewhere in the world.” He did not say in what part of the world it existed, but fairly obviously it was in South America.”

The German writer Mattern said that Admiral Doenitz told a graduating class of naval cadets in Kiel in 1944: “The German Navy has still a great role to play in the future. The German Navy knows all hiding places for the Navy to take the Fuhrer to, should the need arise. There he can prepare his last measures in complete quiet.” LINK 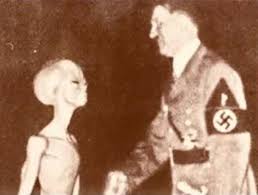 Hitler photo with a grey?

If one accepts the report that Nazi Germany, as having been influenced by Manipulative Extraterrestrials, which reportedly have acquired access to technologies which have significantly lengthened their life spans, then it is plausible that indoctrinated followers of Manipulative Extraterrestrials may have been granted similar access to such advanced technologies. Such technological access would help Nazis realise their reportedly sought ambitions to seek to reclaim a global conquest in a sought World War III.

Adolf Hilter has been historically documented as being a member of the UFO oriented Thule society, before his rise to power. Nazi Germany was allegedly inspired from his contacts with representatives of alleged Great Pyramid inspiring Extraterrestrial “Aryan” civilizations. This has been documented in the article titled, “The Aliens of the Golden Dawn”. LINK.

In the book entitled The Dawn of Magic by Louis Pauwells and Jacques Bergier, first published in France under the title Le Matin des Magiciens 1960, Hitler was documented as having indicated: “The new man is living amongst us now! He is here!” exclaimed Hitler, triumphantly… I will tell you a secret. I have seen the new man. He is intrepid and cruel. I was afraid of him.” LINK

Dr. Michael Salla, Dr. John Lash and David Icke inspire the consideration of Off-world interests, that are in the apparent continued wilful negligence that is associated with the Gulf Oil Spill tragedy.

Information on Over 98,000 Terrorist Attacks