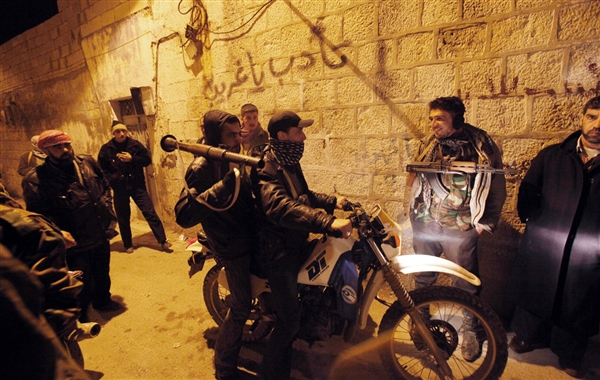 Excerpts from the Arab League observers’ report on Syria make it clear that the establishment media is only telling part of the story and exaggerating violence by the al-Assad government and its police and military.

The report mentions an “armed entity’ that is killing civilians and police and conducting terrorist attacks targeting innocent civilians. Casualties from these attacks are attributed to the al-Assad government and used to build a case against Syria in the United Nations.

Rebels in Idlib, Syria. Evidence reveals they are supported by the CIA, MI6, and Mossad.

According to the Arab League report, the “Free Syria Army” and “armed opposition groups” are responsible for many of the killings.

In January, it was reported that MI6, the CIA, and British SAS are in Syria working with the Free Syrian Army and the Syrian National Council to overthrow the al-Assad regime. The Free Syrian Army is widely recognized as a creation of NATO. It is comprised largely of militants from the Muslim Brotherhood – itself an asset of British intelligence – and is funded, supported, and armed by the United States, Israel, and Turkey.

The report lends credence to reports filed in November of last year by journalist Webster Tarpley, who visited the Middle Eastern nation.

“What average Syrians of all ethnic groups say about this is that they are being shot at by snipers. People complained that there are terrorist snipers who are shooting at civilians, blind terrorism simply for the purpose of destabilizing the country. I would not call this civil war – it is a very misleading term. What you are dealing with here are death squads, you are dealing with terror commandos; this is a typical CIA method. In this case it’s a joint production of CIA, MI6, Mossad, it’s got money coming from Saudi Arabia, The United Arab Emirates and Qatar,” Tarpley told RT.

Tarpley said the United States is pushing a “bankrupt model of the color revolution, backed up by terrorist troops – people from Al-Qaeda and the Muslim Brotherhood” and the objective is “to smash the Middle East according to ethnic lines.”

Excerpts from the Arab League observers’ report make it clear “that there is widespread violence on both sides, but that the opposition and the Western media have exaggerated the violence and casualties inflicted by government forces,” writes Nicolas Davies for War Is A Crime blog, formerly After Downing Street.

“The UN has stopped accepting casualty figures claimed by the opposition, and has frozen its “official” estimate of civilian deaths at 5,400, without acknowledging that this may already be highly exaggerated,” Davies explains. “This is not yet a bloodbath on the scale of Libya, where even the new government admits that at least 25,000 people died in the NATO-led war.  Syria could follow the Libya model though, if NATO and the GCC keep providing weapons and military training to the Free Syrian Army and are prepared to beef it up with special forces on the ground, and as long as the UN approves a no-fly zone to provide cover for another 9,700 air strikes.”

The establishment media put the number of dead between 1,000 and 5,000. The International Criminal Court, Hisham Abu Hajer (of the Libyan “rebels,” in other words al-Qaeda), Pravda and other sources put the number at between 50,000 and 100,000. Tarpley estimated the number at 150,000, a staggering number for a population of just under six and half million people.

Relevant excepts from Report of the Head of the League of Arab States Observer Mission to Syria from December 24, 2011 to January 18, 2012 follow:

“The Mission determined that there is an armed entity that is not mentioned in the protocol. This development on the ground can undoubtedly be attributed to the excessive use of force by Syrian Government forces in response to protests that occurred before the deployment of the Mission demanding the fall of the regime. In some zones, this armed entity reacted by attacking Syrian security forces and citizens, causing the Government to respond with further violence. In the end, innocent citizens pay the price for those actions with life and limb.

In Homs, Idlib and Hama, the Observer Mission witnessed acts of violence being committed against Government forces and civilians that resulted in several deaths and injuries. Examples of those acts include the bombing of a civilian bus, killing eight persons and injuring others, including women and children, and the bombing of a train carrying diesel oil. In another incident in Homs, a police bus was blown up, killing two police officers. A fuel pipeline and some small bridges were also bombed.

28. The Mission noted that many parties falsely reported that explosions or violence had occurred in several locations. When the observers went to those locations, they found that those reports were unfounded.

29. The Mission also noted that, according to its teams in the field, the media exaggerated the nature of the incidents and the number of persons killed in incidents and protests in certain towns.

According to their latest reports and their briefings to the Head of the Mission on 17 January 2012 in preparation for this report, group team leaders witnessed peaceful demonstrations by both Government supporters and the opposition in several places. None of those demonstrations were disrupted, except for some minor clashes with the Mission and between loyalists and opposition. These have not resulted in fatalities since the last presentation before the Arab Ministerial Committee on the Situation in Syria at its meeting of 8 January 2012.

Some observers reneged on their duties and broke the oath they had taken. They made contact with officials from their countries and gave them exaggerated accounts of events. Those officials consequently developed a bleak and unfounded picture of the situation.

Arab and foreign audiences of certain media organizations have questioned the Mission’s credibility because those organizations use the media to distort the facts. It will be difficult to overcome this problem unless there is political and media support for the Mission and its mandate. It is only natural that some negative incidents should occur as it conducts its activities because such incidents occur as a matter of course in similar missions.

75. Recently, there have been incidents that could widen the gap and increase bitterness between the parties. These incidents can have grave consequences and lead to the loss of life and property. Such incidents include the bombing of buildings, trains carrying fuel, vehicles carrying diesel oil and explosions targeting the police, members of the media and fuel pipelines. Some of those attacks have been carried out by the Free Syrian Army and some by other armed opposition groups.

Since its establishment, attitudes towards the Mission have been characterized by insincerity or, more broadly speaking, a lack of seriousness. Before it began carrying out its mandate and even before its members had arrived, the Mission was the target of a vicious campaign directed against the League of Arab States and the Head of the Mission, a campaign that increased in intensity after the observers’ deployment. The Mission still lack the political and media support it needs in order to fulfill its mandate. Should its mandate be extended, the goals set out in the Protocol will not be achieved unless such support is provided and the Mission receives the backing it needs to ensure the success of the Arab solution.”