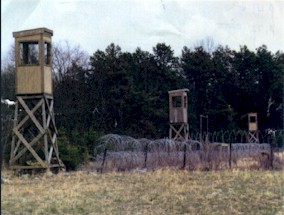 There over 800 prison camps in the United States, all fully operational and ready to receive prisoners. They are all staffed and even surrounded by full-time guards, but they are all empty. These camps are to be operated by FEMA (Federal Emergency Management Agency) should Martial Law need to be implemented in the United States and all it would take is a presidential signature on a proclamation and the attorney general’s signature on a warrant to which a list of names is attached. Ask yourself if you really want to be on Ashcroft’s list.

The Rex 84 Program was established on the reasoning that if a “mass exodus” of illegal aliens crossed the Mexican/US border, they would be quickly rounded up and detained in detention centers by FEMA. Rex 84 allowed many military bases to be closed down and to be turned into prisons.

Operation Cable Splicer and Garden Plot are the two sub programs which will be implemented once the Rex 84 program is initiated for its proper purpose. Garden Plot is the program to control the population. Cable Splicer is the program for an orderly takeover of the state and local governments by the federal government. FEMA is the executive arm of the coming police state and thus will head up all operations. The Presidential Executive Orders already listed on the Federal Register also are part of the legal framework for this operation.

The camps all have railroad facilities as well as roads leading to and from the detention facilities. Many also have an airport nearby. The majority of the camps can house a population of 20,000 prisoners. Currently, the largest of these facilities is just outside of Fairbanks, Alaska. The Alaskan facility is a massive mental health facility and can hold approximately 2 million people.

Now let’s review the justification for any actions taken…

Executive Orders associated with FEMA that would suspend the Constitution and the Bill of Rights. These Executive Orders have been on record for nearly 30 years and could be enacted by the stroke of a Presidential pen:…

allows the government to take over all modes of transportation and control of highways and seaports.

allows the government to seize and control the communication media.

allows the government to take over all electrical power, gas, petroleum, fuels and minerals.

allows the government to seize all means of transportation, including personal cars, trucks or vehicles of any kind and total control over all highways, seaports, and waterways.

allows the government to take over all food resources and farms.

allows the government to mobilize civilians into work brigades under government supervision.