Are Corporations Masquerading as Government in Australia & World Wide? 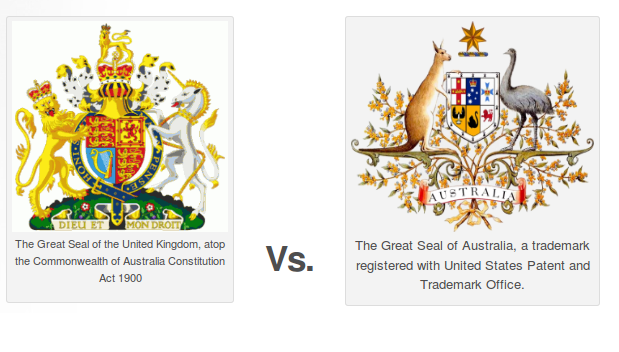 The Great Seal of the United Kingdom, atop the Commonwealth of Australia Constitution Act 1900

The Great Seal of Australia, a trademark registered with United States Patent and Trademark Office.

Which is seen on “government” literature ?

Would you be surprised to find a company with the same name as your country registered with the Security and Exchange Commission (SEC) in Washington DC? Well, guess what?! Among those listed as corporate entities by the United States SEC are Israel, Turkey, Italy, Hungary, Sweden, Finland, Argentina, Colombia, Brazil, The Philippines, South Korea, Japan, Jamaica, South Africa, Canada, Australia… and my personal favourite (and I quote) “Her Majesty the Queen in Right of the Province of Alberta as represented by Alberta Investment Management Corp.”

Interesting! So what could all this mean? For the purpose of this article we will follow the example of Australia.

Well, that certainly raises some questions!

Why is a company called ‘COMMONWEALTH OF AUSTRALIA’ registered in Washington DC? What reason could there be for a country to be registered as a company?

Why would Australia be registered with the SEC in the United States? And why would it provide a ‘Prospectus’ and annual ‘Economic and Fiscal Outlook’ documents to the SEC? And be subject to SEC regulation?

Why is the Great Seal of Australia a trademark registered with United States Patent and Trademark Office?

Why do today’s government departments have corporate mission statements like “we provide services on BEHALF of government” and “our CLIENTS include government…”?

What happened to “we ARE government”?? Does this suggest they are NOT true government, but a company masquerading as government?

If a company registered in Washington DC is falsely claiming government status in Australia, what happened to the real (de jure) government with a similar name? And when?

And are the laws in Australia therefore just rules for employees and contractors of the corporation?

The answer appears to be NO.

International trade implies mutual agreement; reciprocity; a common method of exchange. But the reality is that the ‘COMMONWEALTH OF AUSTRALIA’ is registered as a corporate entity with the United States SEC, but not the other way around. There appear to be no comparable corporate entities registered in other countries with which Australia trades. And nations ranking among the United States’ biggest trading partners do NOT have corporate avatars registered with the American SEC. Perhaps registration in Washington DC is for the purpose of trading Government Bonds. Interesting…

… But this strange corporate entity is only half the story. Before government bonds can even exist, surely there must first be a legitimate government.

Government and the role of Governor-General in Australia

So what’s the problem?

In 1984, Letters Patent supposedly revoked the original Letters Patent of 1900 and provided new provisions for the Office of Governor-General (view Letters Patent 1984). This happened under the ‘Great Seal of Australia’, which we already know is a corporate trademark registered with the United States Patent & Trademark Office in the U.S. (view registration)

Surely such an attempt at revocation cannot therefore be lawful? And if not, what Office is the Governor-General in Australia presently occupying? Is the person we call “Governor-General” truly a representative of an “heir and successor” to the late Queen Victoria?

The answer appears to be NO.

Again… the answer appears to be NO.

So let’s test the theory…

Wake Up World friend and colleague Scott Bartle documented his recent dealings with ‘Australian Customs & Border Protection Service’ in his self-funded documentary “What The FUQ? – Frequently Unanswered Questions of the Australian Government”.

This simple, concise and sometimes hilarious case-study follows Scott’s ongoing interactions with a supposed “government” entity that simply does not behave as a genuine government agency should.

And all he did was ask them to demonstrate their validity!

To view this documentary in full, Click here. I highly recommended it.

So… IS the “Australian Government” the same government the original Office of Governor-General was intended to Administer?

It’s a question that officials at all levels of “Australian Government” have seem unwilling or unable to answer. Some readers may think I’m a crack-pot for even asking the question. “Break out the tin-foil hats!” they’ll cry! But please… Before you form an opinion or post a comment on this article, ask the Australian Government the same question yourself:

Can you please demonstrate that today’s Office of Governor-General is the same Office that was constituted by the late Queen Victoria in Letters Patent of 1900?

It is your right, after all. And there are certainly some details that don’t add up. But it gets better….

That’s odd, they certainly don’t ACT like a true government.

At first “Government” may just ignore you. But since anyone claiming government status has a responsibility to prove it, their silence is very indicative, don’t you think? So push your Government a little further, and see what happens when you really start to question who’s who. Taxes & fines are suddenly waived, and miraculously, licenses & permits are no longer required! And it doesn’t stop there.

Is this situation unique to Australia?

To our friends and readers from the Commonwealth of Australia, we recommend you contact your local Members and Senators and ask them one simple question:

Can you please demonstrate that today’s Office of Governor-General is the same Office that was constituted by the late Queen Victoria in Letters Patent of 1900?

To our friends and readers outside Australia, we recommend you identify the documents that established the original offices of government in your country, then ask one simple question of your government representatives:

Can you please demonstrate that today’s government is the same one as established at the inception of this country?

Demonstrating its own legitimacy is a very simple thing that every government agency should be able to do. And in a true democracy, silence is an unacceptable response of government to questions of its very legitimacy. But today the “Australian Government” appears unwilling or unable to prove its legitimacy.

It only takes a few minutes to write to your local member’s office. Please come back to Wake Up World and tell our readers how your enquiry was met. Silence? Jargon? Or a simple demonstration of your government’s legitimacy?

We’d love to hear your stories, so please leave a comment or send us an email

So what the FUQ do we do next?

Written enquiries made to Ministers and Government agencies, to the Office of the Prime Minister and to the Office of Governor General remain unanswered. So in the absence of a response from Government, Wake Up World supports respectfully escalating this matter to the current Monarch, Her Majesty, The Queen.

Surely Her Majesty must know the answer; why a corporation in the United States bears the name ‘COMMONWEALTH OF AUSTRALIA’; why in 1984 her authority to amend the provisions for the Office of Governor-General was granted on a company letterhead; why those claiming to represent true government in Australia have been unable to prove that status; and why some, when challenged, may suddenly overlook one’s obligations and run silently in the other direction.

…and ask Her Majesty for the truth.

…we all have a right to know.

…it is just one simple question.

In a true democracy, silence is an unacceptable answer of government to questions of its legitimacy.

Andy Whiteley is co-founder of Wake Up World.

Special thanks Scott Bartle for travelling 4,000 kms to help join the dots.