Be Advised! Aspartame Changed its Name to AminoSweet 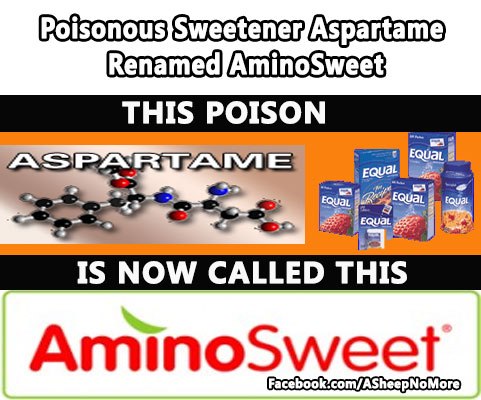 Aspartame, the artificial sweetener linked to cancer, heart palpitations, seizures, weight gain and other severe medical issues, is now going by the name AminoSweet. The toxic sweetener, Aspartame, has been around over 25 years after it was accidentally discovered by chemist, James Schlatter while working for the drug company G.D. Searle & Company. It was created as an anti-ulcer pharmaceutical drug, but the chemist discovered it had a sweet taste, so the drug company switched its application to the FDA from a drug to a food. It was none other than Donald Rumsfeld, who was the CEO of Searle who pushed for Aspartame to be sold on the market in 1985. If that name sounds familiar, your right, he is the same Donald Rumsfeld, former U.S. Secretary of Defense who served under George W. Bush.  He is a perfect example of someone taking advantage of the “revolving door” between our government and corporations.

AminoSweet is Aspartame, it changed its name to fool the public, and I am guessing it did so because consumers figured out that their product made them sick. Aspartame is made up of three chemicals: aspartic acid, phenylalanine, and methanol. The book Prescription for Nutritional Healing, by James and Phyllis Balch lists aspartame under the category of “chemical poison.”

WARNING! Read labels before buying foods with the name Phenylalanine. I will go one step further — if you need to bring along a chemistry book to the store in order to understand the ingredients on the labels — DO NOT BUY IT!

Phenylalanine is an essential amino acid (that is, an amino acid which our bodies cannot make and which we must obtain from our diet). It is also one of the amino acids which is used to make aspartame. Phenylalanine is found in all protein-containing foods including milk, cheese, eggs, meat and fish.

Products which contain aspartame have a label which says ‘Contains a source of phenylalanine’. This label is there to help people with a rare inherited genetic disorder called phenylketonuria (PKU). These people cannot metabolise phenylalanine from any source and need to follow a strict diet to control their intake of this amino acid. The disorder affects approximately 1 in 10,000 babies, and is identified by screening shortly after birth. [Source]

Ten percent of this sweetener contains methanol. When it is absorbed by our intestines, it breaks down into formic acid and formaldehyde. Formaldehyde is a deadly neurotoxin that causes cancer, retinal damage, interferes with DNA replication and causes birth defects.

I went to the AminoSweet website to see what kind of “spin” they are putting on their repackaged product to entice shoppers to buy their so-called “natural” sweetener and here is their selling point:

AminoSweet aspartame is the low calorie sweetener that tastes just like sugar. It is made from two building blocks of protein just like those found naturally in many everyday foods. Aspartame is digested by the body in exactly the same way as these other protein foods and so does not bring anything new to our diet.

Makers of this artificial sweetener claim it is made from protein found “naturally” in many everyday foods. So what is the meaning of ‘natural’ when it comes to the labeling of food? The FDA’s website writes:

“From a food science perspective, it is difficult to define a food product that is ‘natural’ because the food has probably been processed and is no longer the product of the earth. That said, FDA has not developed a definition for use of the term natural or its derivatives.” [Source]

The word ‘natural’ is being thrown around to describe all sorts of genetically modified foods and AminoSweet is genetically modified. There is nothing natural about it. Why do you think these drug companies buy patents? They create them in a lab and they own it. And they know exactly what they are doing and choose to fool consumers into thinking their foods are safe when science proves differently.

In June 2013 Ben & Jerry’s Ice Cream and Campbell’s Soup became defendants in class action lawsuits that allege they misrepresented the nature of the ingredients on their product labels. The Campbell’s Soup Company is currently being sued by Florida residents for misrepresenting the genetically modified (GMO) corn in its soup as “natural.” Ben & Jerry’s decided to stop using genetically modified ingredients as a result of their suit.

Ben & Jerry’s used to be known for their healthy ‘natural’ ice creams, but I guess when they sold out to British-Dutch conglomerate Unilever, they sold their souls along with it. It looks like they haven’t updated their website since the sale either, even though Unilever has owned them since 2001. They portray themselves as another American success story — but according to the lawsuit, they are just another corporation choosing to deceive the public — much like another American success story — Monsanto who purchased Searle & Company in  1985– who make Aspartame now called AminoSweet.

New Study: Fluoride Can Damage the Brain – Avoid Use in Children