Doctors prescribed enough pain medication last year to partially numb every American adult around-the-clock for a month. So much of the stuff is now being handed out that lethal overdoses tripled in the past decade, according to a new report from the CDC out Tuesday. 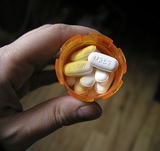 In fact, painkillers now cause more deaths in America than cocaine and heroin combined. And if the numbers keep rising, they’ll soon outpace car crashes as the nation’s leading cause of fatal injury.

CDC Director Thomas Frieden has one word for that: Epidemic.

“Now the burden of dangerous drugs is being created more by a few irresponsible doctors than by drug pushers on street corners,” he said.

The fact that prescription drug abuse is a growing problem may not be news, but the CDC Vital Signs report brings the most recent statistics into startling focus. And together, they illustrate a trend that shows no sign of slowing any time soon. Nearly half a million emergency department visits in 2009 were traced to the misuse or abuse of prescription painkillers. And in many states, the crisis wasn’t confined to the emergency wing.

Dr. Lewis P. Rubin is the director of newborn services at Tampa General Hospital and co-chair of a task force in Florida looking at the impact of prescription drug use on pregnancy and newborns. Below, he answers our top questions on the situation in Florida, particularly when it comes to the state’s youngest and most vulnerable residents.

NEWSHOUR: How bad is the prescription painkiller problem in Florida?

Rubin: Unfortunately, Florida is the epicenter of the prescription drug epidemic in this country and there are several reasons for that. One is that until last month, Florida lacked a prescription drug database, making it possible for an individual to go to a physician’s office, obtain painkillers, go down the street and get the same prescription and so on. With the database, pharmacies can instantly see whether there have been multiple prescriptions filled for the same person. It also helps to keep track of physicians who may be inappropriately prescribing painkillers. Most physicians are legitimately and carefully doing their work in patient care. But a small number of unscrupulous people with medical licenses have abused that privilege by dispensing painkillers for little or no medical indication.

The other reason Florida’s had such a high rate is that Florida’s been notorious for having multiple pill mills — places where people can go in and have no medical indication, get a prescription and even go to a pharmacy attached to the pill mill to get it filled. The good news is that Florida is one of the states taking proactive steps to crack down on both of those factors.

NEWSHOUR: What kinds of people are taking these drugs?

Rubin: This is a problem that insinuates itself into every age group, occupation, socioeconomic status, and ethnic group. Why? Because it’s not a question of needing to go out and score heroin or opium. There’s the ability to be able to get very addictive drugs through legitimate channels that also have recreational potential. And as they become increasingly available for legitimate uses, their abuse potential has been realized.

On top of that, unscrupulous individuals are taking advantage of that market. Huge amounts of them are being diverted from the legitimate pharmaceutical market and resold to those who have become addicted.

NEWSHOUR: You’re the director of newborn services at Tampa General Hospital. How are you seeing this play out?

Rubin: As the usage of these drugs increases across the population, it also increases in women of childbearing age. Over the last several years, there’s been a tenfold increase in the number of newborns identified as having drug withdrawal, and the majority of these babies have withdrawal from prescription drugs. They have something that’s technically called neonatal abstinence syndrome. It’s the equivalent of someone who goes through acute withdrawal.

These babies can be utterly inconsolable in pain. They’re jittery, they scream, they may be vomiting, they have loose stools, difficulty breathing. And they need to be managed by giving them opium to allow them to withdraw under a controlled situation where they don’t experience any pain.

NEWSHOUR: And you’re seeing widespread cases in your hospital?

Rubin: At a given time in maternity hospitals in my region, anywhere between 10 and 20 percent of the babies in special care and neonatal intensive care are there because of being born addicted. And again, most of those are to prescription drugs. I’ve seen a woman who was in a severe motor vehicle accident and needed to be on very high dose of painkillers for several years. When she had a child, through no fault of her own, the baby needed to stay in the hospital for one month being to be weaned off methadone. That’s a story that illustrates how anybody can end up in this situation.

On the other end of the spectrum, another woman came in who was taking illicit drugs on the street and she delivered a severely growth-restricted, premature infant. So the types of addiction can really run the spectrum. This part of the prescription drug epidemic is particularly tragic. The most vulnerable and innocent members of our society are suffering.

NEWSHOUR: What do you see as the trajectory of this epidemic? Is it only going to get worse?

Rubin: I really think the force of the evidence suggests we’re about to see a turnaround. Throughout the country, officials are cracking down on illicit and unscrupulous sources of illegal and illicit drugs. In Florida, there’s been a major effort to start closing pill mills. We’re seeing more public awareness and education campaigns, as well as sessions for physicians, doctors and nurses. And there’s begun to be a public outcry against the dangers of prescription drug abuse. Speaking from one of those places in the country that has been most severely affected, I can really say there’s been a concerted effort to crack down and reverse this epidemic.

Monsanto: The Godfather of Chemical Capitalism