Breaking down the Black Budget 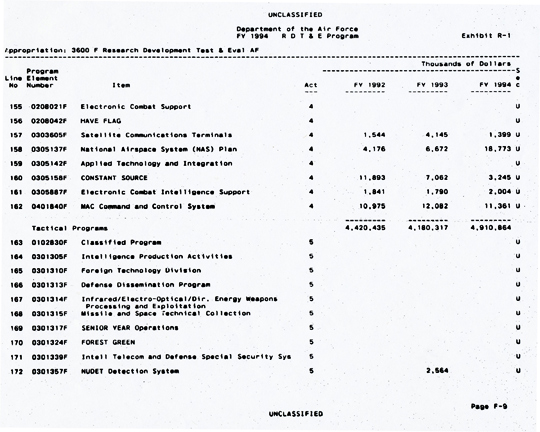 “In the councils of government, we must guard against the acquisition of unwarranted influence, whether sought or unsought, by the military-industrial complex. The potential for the disastrous rise of misplaced power exists and will persist.” – quote from Dwight Eisenhower’s farewell address to the nation delivered on January 17, 1961

With those historic words, President Eisenhower warned the nation of the dangers associated with run-away programs within the military industrial complex. In this world of cloak-and dagger behind the scenes activity, the “Black Budget” has grown exponentially. Having little congressional oversight, and virtually no public scrutiny, programs developed within this black world enjoy almost unlimited access to financial backing regardless of their probability of success. However, what specific details on the black budget can be gleamed from publically available sources? In addition, can some of these programs be declassified without representing any threat to the national security of the United States? In this article, we will examine these questions in light of the public’s constitution right to question the activities of the elected government.

Article 1, Section 9 of the United States Constitution reads as follows: “No Money shall be drawn from the Treasury, but in Consequence of Appropriations made by Law; and a regular Statement and Account of the Receipts and Expenditures of all public Money shall be published from time to time.” In other words, according to the Constitution, it is the law for the government to make available to the public (from time to time) an accounting of how much money is spent. Surprisingly, the government actually indeed does comply with this very important form of “checks and balances”. Every January, the Department of Defense submits its annual budget report for the concurrent fiscal year. The unclassified version of this report is available to the public at the Library of Congress. However, the Constitution never mentioned any details of exactly how the money should be tracked or mandated requirements which would reveal exactly what the money was spent on. Technically, the wording in the constitution is too vague which opens up the possibility for rampant fraud, waste, and abuse.

Such abuses have led to the infamous accounts of $700 coffee pots, and $600 screws. By 1987, the Black budget had tripled under the Reagan administration. Procurement funding for the Pentagon’s Black budget for fiscal year 1988 was a staggering $35 billion dollars. During the 1980’s, secrecy appeared to be standard operating procedure, with billions disappearing on projects which may never see the light of day. Indeed, Reagan’s desire to “classify everything” was so prevalent that in 1982, he signed an executive order which essentially revised the procedure for holding on to military secrets. The order stated that in balancing the public’s right to know, against the government’s power to keep secrets, secrecy would carry more weight. However, according to Les Aspin (late House Armed Services Chairman) and ranking minority member William Dickinson, 70% of the Black budget could be declassified without impacting national security. Unfortunately, few federal investigators have the security clearance necessary to audit black programs. According to a statement by Thomas Amlie (Pentagon missile expert) published in the Detroit Free Press on February 8, 1987 there are three primary reasons for Black programs: 1) “you’re doing something that should genuinely be secret” 2) “you’re doing something so damn stupid that you don’t want anybody to know about it” 3) “you want to rip the money bag open and get out a shovel, because there is no accountability whatsoever.” A thirty-one year old systems engineer who was interviewed for the same Detroit Free Press article had this to say about classified programs: “In a black project, people don’t worry about money.” He continued by stating that “if you need more money, you got it, if you screw up and you still need more you got it, you just keep pouring more money into the thing until you get it right. The incentive isn’t there to do it right the first time. Who’s going to question it?” One can only imagine the catastrophic consequences which might occur if government agencies like the FAA, Department of Transportation, or ICBM missile silo contractors operated under the same work ethic.

Another technique employed to conceal black programs is to delete their overall costs from the unclassified budget. They are given vague and non-descript code names which are specifically designed to hide their true purpose. In addition, the Pentagon keeps many black programs secret from congress, from the General Accounting Office, and from its own auditing agencies. According to a report published in Aviation Week and Space Technology (August 17, 1992) the black budget burns through over $100 million dollars per day, every day of the year on intelligence gathering, covert operations, and weapons development with no civilian oversight. Could some of that funding go to support our nation’s faltering infrastructure, or to improving our educational system? Amazingly, a House Armed Services Committee study conducted in 1990, revealed that Congress reviews only 5-10% of programs that have a “Special Access Required” (SAR) designation. This lack of accountability further increases the risk of money hungry defense contractors who are eager to “influence” their high level political insiders within the Washington beltway.

When examining the annual unclassified Department of Defense budget report, it’s easy to see how some black programs can be concealed. For example, the RDT&E Programs (R-1) budget report for fiscal year 1994 (see above) contains multiple programs with no procurement funding listed. These include such innocuous listings such as: “SENIOR YEAR”, and “FOREST GREEN”. Classifying the name, function or cost of a particular black program automatically forces less privileged legislators to vote “in the dark”.

Monitoring of the black budget increased in 1980, when President Carter leaked information that the United States Air Force was developing a “Stealth Bomber”. Then in 1981, Northrop’s stock soared. During the Reagan administration, funding for the black budget increased to $22.4 billion for fiscal year 1987. Specifically six billion went to four black aircraft programs (three of which were owned by Northrop). These included the following: 1) Northrop B-2 Stealth Bomber, 2) YF-23 Advanced Tactical Fighter, 3) Advanced Tactical Aircraft, 4) Lockheed’s F-117A Stealth Fighter. Ultimately, Northrop lost out on the Advanced Tactical Fighter program, which went to Lockheed in the form of the F-22. They also lost the Advanced Tactical Aircraft (ATA) contract, which went to the ill fated McDonnell Douglas/General Dynamics A-12 Avenger II. In regards to the B-2, the Air Force originally proposed to buy 132 Stealth Bombers at a cost of $277 million apiece, for a total of $36 billion. In the end however, Northrop built only 21 stealth bombers at the staggering cost of $2.3 billion per aircraft.

According to Ben Rich (Lockheed Skunk Works director 1975-1991), keeping programs secret can add anywhere from 10 to 15% to the overall cost. This includes the construction of fortified buildings, extra guards, security clearance logistics, and shuttling works to and from classified facilities. Strangely, some programs are so secret that even our top military Generals may not know what “mystery aircraft” might be lurking inside dimly lighted hangars at Area 51, Edwards North base, or the Tonopah Test Range. Within the murky world of secret defense projects there are three main categories: SAP’s (Special Access Program), USAP (Unacknowledged Special Access Program), and so called “Waived SAPS”. In the case of waived SAP’s, their existence is not known by Congress or possibly the President. Aside from the defense contractors, spending within the intelligence community has also increased dramatically. For fiscal year 1988, the CIA’s budget was 2.5 billion. The secretive NRO (National Reconnaissance Office) consumed four billion. However, this pales into insignificance when compared to the spending by the NSA (National Security Agency) which spent an estimated ten billion. In fact, under a secret directive signed by Reagan, the NSA has access to the computer systems of the IRS, Social Security Administration, and every other civilian government agency. Indeed, no law or charter establishes limits on the power of the NSA since its secret formation by President Truman in 1952. It’s unbridled access to inter-agency documentation makes it a prime candidate for spying on American citizens, and side-stepping the Constitution.

Since the beginning of the cold war, there was indeed a need to classified information, and to create secret programs. For example, the specific mathematical equations used in the formation of the Atomic bomb should always be kept under wraps. In more modern times, the electronic counter-measures used on American Stealth bombers should remain secret as well. In addition, the communication frequencies used by our armed forces in Afghanistan should be concealed. However, the total disregard for the constitution, and the “spending spree” mentality of some political leaders and defense contractors should be more aggressively monitored. Indeed, as reported by CNN, on September 10, 2001 (one day before 9/11), former secretary of defense Donald Rumsfeld testified before Congress that the Pentagon could not account for $2.3 Trillion dollars. Where did all that money go? The American public should demand a more proactive accounting of expenditures within Department of Defense. In the end, even our highest elected political leaders are not “above the law”, and additional public scrutiny would go a long way in increasing faith in both the Constitution, and the current administration.

The Symbolism Hidden Within “The Wizard of Oz”

Global Banks Are The Financial Services Wing of The Drug Cartels