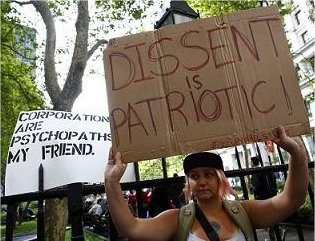 UPDATED Sept. 27, 2011 at 8:29 PM – MSNBC’s Lawrence O’Donnell is siding with the Occupy Wall Street movement and comments about police brutality. Video below.

UPDATED Sept. 28, 2011 at 2:54 am – Celebrities are joining in support of the Occupy Wall Street movement. Details below.

UPDATED Sept 28, 10:26 am – Occupation Together website is helping to organize global occupation protests.

September 27, 2011 – TAMPA, FL – In a bizarre twist of fate, a growing movement of New York City Police Department officers are banding together with the Occupy Wall Street movement, while the main stream media continues to relatively ignore this escalating event.

The Occupy Wall Street movement issued the following statement on their website:

The news was released shortly after the identity of Deputy Inspector Anthony Bologna was revealed after he allegedly pepper sprayed a deaf woman.

A second video of Officer Bologna has surfaced with yet another pepper spray assault on peaceful protesters. Notice how Officer Bologna weasles himself into the crowd, then scurries away in the hope that he would not be noticed by anyone:

On Wednesday, Police Commissioner Raymond W. Kelly stated that the Internal Affairs Bureau will look into the decision of a high-ranking officer to use pepper spray on a number of female protesters this past Saturday at the Occupy Wall Street demonstration.

The movement has moved into a global position with the new Occupy Together website, which organizes occupation protests from around the world.

It is with hope and intent that the officers who are using excessive force on peaceful protestors realize that the only ones they are hurting is themselves through the destruction of the Constitution and the right for free speech. As the Occupy Wall Street movement grows, it is hopeful that officers from other cities will join in on the side of humanity and peace.

For news you won’t see on the main stream media, stay tuned to in5d alternative news.

In a related story, MSNBC’s Lawrence O’Donnell is siding with the peaceful protesters who have been abused by the New York City Police Department, stating, “This weekend, a few troublemakers turned a peaceful protest against Wall Street greed into a violent burst of chaos. The troublemakers carried pepper spray and guns and were wearing badges… for not doing anything.”

Visit msnbc.com for breaking news, world news, and news about the economy

Copyright Information: Copyright in5d and Gregg Prescott, M.S.. This content may be freely reproduced in full or in part in digital form with full attribution to the author and a link to www.in5d.com. Please contact us for permission to reproduce this content in other media formats.

Please Google + and Digg this article below to get it the exposure that the main stream media is ignoring by clicking the Digg button and “Digg”. Thanks!