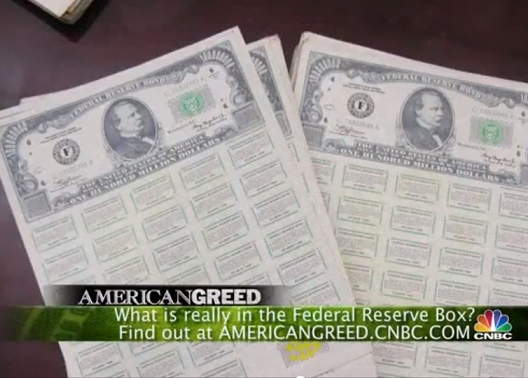 The fake bonds and other securities were seized from a Swiss trust company during a joint operation by Italian, Swiss, and US authorities.

­The fake bonds and other securities were seized from a Swiss trust company during a joint operation by Italian, Swiss, and US authorities. The fake certificates signed “Chicago, Illinois, Federal Reserve Bank” were stored in trunks stamped with “Federal Reserve System, Treaty of Versailles” marks. The bonds were carrying the false date of issue of 1934.

The forgers were planning to use the fake certificates as collateral to secure loans in a number of Swiss banks, prosecutor of the southern Italian city of Potenza said as cited by Reuters.

The investigation began over a year ago as a trivial probe into Italian mafia loan-sharking. However, after the Italian authorities uncovered an international network plotting a full-scale fraud, they called upon their Swiss and US colleagues. The US experts helped to identify the bonds as fakes.
http://rt.com/news/fake-us-treasury-bonds-661/
*****************************************************
17 February 2012 Last updated at 15:45
Fake US bonds worth trillions seized
Italian prosecutors say they have broken up an organised crime ring that was hiding trillions of dollars of fake US bonds.

Worth $6 trillion, the bonds were found in three metal boxes in a warehouse in the Swiss city of Zurich.

Italian authorities have arrested eight people and are investigating them for fraud and other crimes.

Prosecutors are not sure what the gang was planning, but think they intended to sell the counterfeit bonds.

The bonds were found hidden in makeshift compartments of three safety deposit boxes in Zurich, the prosecutors from the southern city of Potenza said in an e-mailed statement. The Italian authorities arrested eight people in connection with the probe, dubbed “Operation Vulcanica,” the prosecutors said.

The U.S. embassy in Rome has examined the securities dated 1934, which had a nominal value of $1 billion apiece, they said in the statement. “Thanks to Italian authorities for the seizure of fictitious bonds for $6 trillion,” the embassy said in a message on Twitter.