Breakthrough: sensors that can convert thoughts into speech 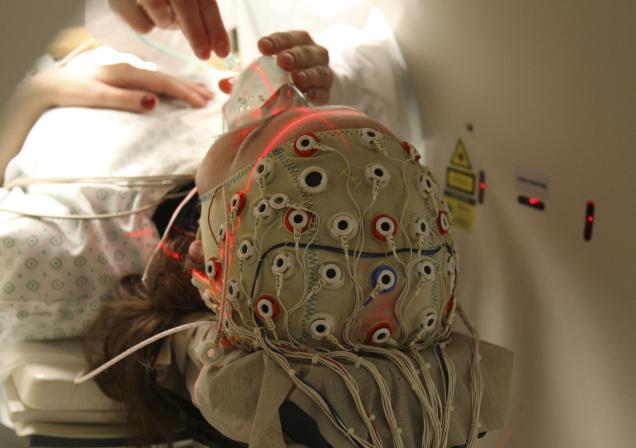 AP A patient examined during a scan. In a major breakthrough, scientists have now been able to interpret thoughts into simple words, through sensors. File photo

A mind reading machine has edged closer to reality after scientists found a way of converting thoughts into words.

Researchers were able to render brain signals into speech for the first time, relying on sensors attached to the brain surface.

The breakthrough, which is up to 90 percent accurate, will be a boon for paralysed patients who cannot speak and could help read anyone’s thoughts ultimately, reports the Telegraph.

“We were beside ourselves with excitement when it started working,” said Prof Bradley Greger, bioengineer at the Utah University who led the project. “It was just one of the moments when everything came together.

“We have been able to decode spoken words using only signals from the brain with a device that has promise for long-term use in paralysed patients who cannot speak. I would call it brain reading and we hope that in two or three years it will be available for use for paralysed patients.”

The breakthrough came when the team attached two button-sized grids of 16 tiny electrodes to an epileptic’s brain’s speech centres, says the journal of Neural Engineering.

The patient had part of his skull removed for another operation to treat his condition.

Using electrodes, the scientists recorded brain signals in a computer as the patient repeatedly read each of 10 words that might be useful to a paralysed person: yes, no, hot, cold, hungry, thirsty, hello, goodbye, more and less.

Then they got him to repeat the words to the computer and it was able to match the brain signals for each word 76 percent to 90 percent of the time.

The computer picked up the patient’s brain waves as he talked and did not use any voice recognition software.

Because just thinking a word is enough to produce the same brain signals, Prof. Greger and his team believe that soon they will be able to have translation device and voice box that repeats the word you are thinking.

Besides, the brains of paralysed people are just as healthy and produce the same signals as those in physically-fit people – it is just they are blocked by injury from reaching the muscle.

Researchers said the method needs improvement, but could lead in a few years to clinical trials on paralysed people who cannot speak due to so-called “locked-in” syndrome.

“This is proof of concept,” Prof. Greger said adding: “We’ve proven these signals can tell you what the person is saying well above chance.”