Could Hurricane Sandy be Weather Modification at Work? 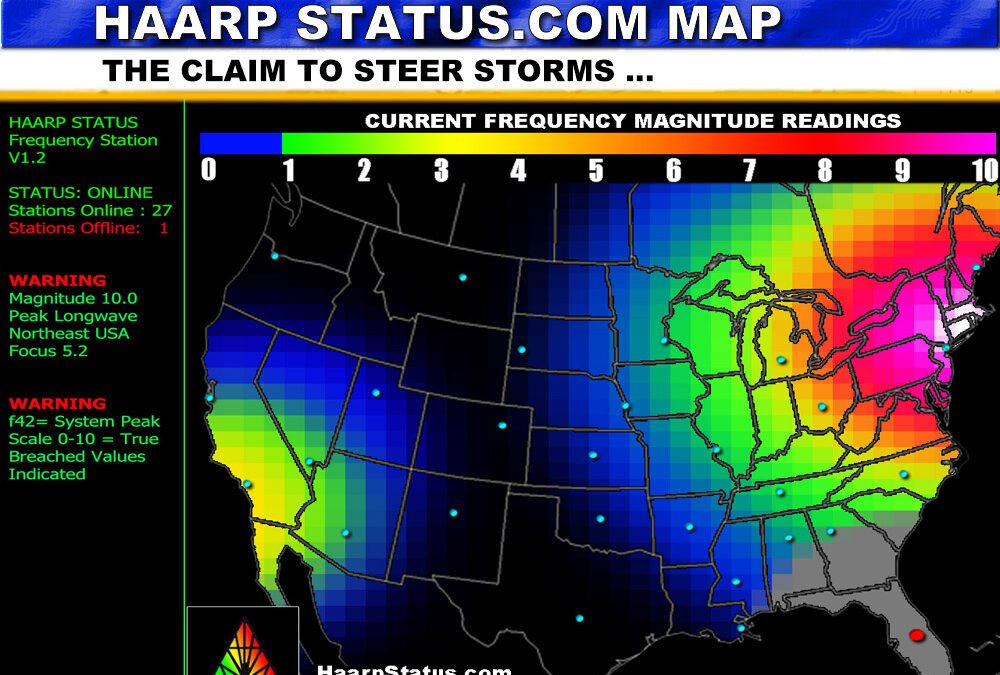 Hurricane Sandy is being described as the “worst storm in 100 years” and will possibly mutate to super-storm status once it combines with a polar air mass over the eastern United States enabling it to cause widespread damage and chaos, but how convenient is the timing of this “natural” event in regards to the election? Is it possible that the storm is a contrived event designed to throw the election for Obama?

The reality of weather modification is no conspiracy theory.

Since before the 50′s, weather modification techniques have existed. In fact, the threat of “weather weapons” was so imminent that the United Nations felt it necessary to draft a treaty ensuring no nation would use this “new means of warfare” against one another. Why would the U.N. draft a treaty if weather modification was just a conspiracy theory?

The 1976 UN Weather Weapons Treaty defined “weather weapons” as follows: “[…] the term “environmental modification techniques” refers to any technique for changing – through the deliberate manipulation of natural processes–the dynamics, composition or structure of the Earth, including its biota, lithosphere, hydrosphere andatmosphere, or of outer space.”

This is a very good article from Press Core on weather modification and how Hurricane Sandy was ‘steered’ into NYC:

The US government is using the HAARP Sea–Based X–Band Radar (SBX) platform to intensify and steer the man made Hurricane Sandy.  Hurricane Sandy is Obama’s October surprise – create and steer a hurricane and cause mass destruction.  The US Air Force / Navy SBX is steering Hurricane Sandy into New York City.

All 3 of the US HAARP Weather Modification systems – the land based system in Alaska, the Sea Based SBX and the mini shuttle X-37B were all built for use as military weather modifying weapons of mass destruction – in direct violation of the Convention on the Prohibition of Military or Any Other Hostile Use of Environmental Modification Techniques…”

Back in 1997, a hurricane simulation drill took place surrounding a hypothetical Hurricane Sandy, modeled after the Hurricane of 1938 which swept up the Eastern Seaboard into New York. Below you’ll find information and charts base around the 1997 drill. Also included below are two other videos dedicated to the 1938 Hurricane, which coincidentally sound quite similar to Hurricane Sandy.

Westchester County Communications Officer Sandy Fried, an Amateur Radio operator and ODES staff member, had recently attended a training seminar at the National Hurricane Center in Miami. Part of the training was a simulation using data from the Hurricane of 1938 that caused major losses on Long Island and in Westchester. The texts of the simulated bulletins, forecasts, discussions and strike probabilities along with the hurricane’s track were sent home with the seminar attendees. We named the simulated hurricane after Sandy, who incidentally was nine years old during the real Hurricane of 1938.

You won’t believe your eyes when you see what this video reveals!!! Satellite and Radar captured Infrasonic Undulation, Chemtrails en mass and Chem Dumping!!! Multiple weather system steering and super storm creation, right before your eyes!!!

DefinitelyHTA – HAARP Type Array infrasonic undulation. But it’s not just the array we know as HAARP in Alaska. It is a myraid of TTA network arrays working in concert. Arrays can be ground based, Satellite emitters, Field antenna signal boosters, flight based, ship based, mobile or even hand held. (Depending on the civilian or military use.) There are even TTA signal echo buoys throughout our oceans. Ionosphere fortified with chemtrail as a reflective frequency mirror.

Atmospheric Scientists in aircraft take information from hurricanes for DHS Operation H.A.M.P. (HURRICANE AEROSOL AND MICROPHYSICS PROGRAM). DHS funds it. One of the functions of those planes is deploying aerosols. In 2010 the American Meteorological Society (AMS) presented discussion on how these aerosols were effective at decreasing and increasing the intensity of Hurricane KATRINA under DHS Operation H.A.M.P.

“Singular Polarity” — simply a magnet with 1 pole rather than a north and south pole.

“Perpetual Motion Generator” — using 2 same pole magnetic unit – singular polarities against each other to create force away from each other continuously.

“Contrail vs chemtrail”. (As Congress refers to them.)
Contrails dissipate to invisibility within seconds or minutes of being laid down because they are simply steam from the jet wash.
Chemtrails are mixtures of aerosols that are sprayed in the ionosphere with metals and chemicals such as aluminum and barium in tiny particulates. 1 reason being to create a mirror effect to bounce frequency off of, to pass frequency as far as 1/4 of the globe away. HAARP website explains this process.

“Infrasonic Undulation” Looks like frequency on a spectrograph. If you Google images – spectrograph, you will find pictures of frequency. You’ll see sound waves in consistant patterns obviously man-made, electro-mechanically emitted. Chemtrail (already magneto-dynamic) becomes more dynamic when frequency is added to the mix to undulate (stir up) the system. “Infrasonic Undulation” through chemtrail is ELF waves stirring air deployed aerosols up. Hitting the metals etc… with high powered – low frequency disperses the metals throughout the storm, the moisture in the storm clings to those metals, Object 1 – move the metals, and you move the storm. Object 2 – decreasing and increasing the storm’s intensity. DHS Documented during KATRINA.

Which is why the new cloud name “Undulatus Asperatus.” “Undulated (Stirred Up) Breathing Vapors” Stirred up by TTA frequency. Kind of reminds you of the NAZI’s who insisted to their victims, “Now breath the vapors in deeply!!!” As they were locking them in the ‘showers’ to be gassed to death, doesn’t it! I get the feeling that when they came up with that name, they were laughing at their many victims whom they dub the “sheeple.”

TTA = Tesla Tech Array. HTA — HAARP Type Array.
(They use frequency to manipulate.) There are ground based TTA’s (like HAARP n Arecibo) multi-million watt frequency emitters around the world along with countless Low Orbit SAC (AEHF) Satellites, booster antenna arrays, oceanic echo buoys, military, commercial and privately owned sea going vessels with TTA units (BTW …ever heard of mass ocean animal deaths – burned bodies and the necropsy reports stating cause of death to be “Acustic Trama?”) , in field military and mobile units, are all a part of the SAME Global TTA Network, under the auspices of the UN and NATO and are thereby complicit.

Decency dictates that having this technology we should use it to save lives and property but…UN Agenda 21 – population reduction from 7 Billion to 500 Million. It means the wholesale slaughter of 6.5 Billion people. ‘The great culling’ they call it. Impossible to believe until you do the research as to why. If you step into their economic shoes, you understand their rationale. The PTB n UN want Obama in office. UN is overseeing our election. May need Martial Law to suspend elections.

If our country’s TTA is involved (and with FrankenStorm it is, because UN Treaty requires WE be the nation responsible under the UN “weather weapons” agreement) then our leader is at the helm of our TTA network. Working along side other countries’ TTA’s – this is a semi-global effort.
The reason???
UN Agenda 21 (Population Reduction) and attempt to suspend elections. With no electricty, floods, population displacement, damage etc… state of emergency – possibly even martial law.