Do we really have to Prepare for the Fourth Box. 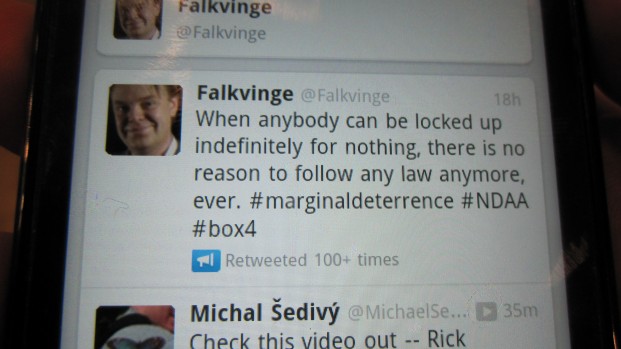 Do We Really Have To Prepare For The Fourth Box?

As I watch the legislative abominations named SOPA, PIPA, and NDAA follow the lead of the DMCA and the Patriot Act in the United States, I realize that the worst possible scenario for civil liberties appears to actually be materializing.

The internal talk within the Swedish Pirate Party has long been that it’s our job to prevent Europe from descending into totalitarian fascism. The United States is lost; it is beyond help and repair and will descend. Our job is to prevent Europe from happily following suit, but instead break off the leash in time. This was apparent five years ago, and is screamingly obvious today.

PAINFUL ARTICLE
This article took me well over 24 hours to write, after a week of procrastination. The typical article takes 30 to 45 minutes, once I know what I want to say. The problem here wasn’t that I didn’t know what to say, but that I wanted to say so much of it, and didn’t know just how far I dared go. In the end, I decided to not hold back but just lay my thoughts open on the table.

There is a good meme on this topic, quoted by many. Liberty is defended with four boxes: soap, ballot, jury, and ammo. Use in that order.

As this is a global blog, I need and want to explain the American wordplay here. These “four boxes” are not at all apparent for a non-native English speaker who is also outside of American culture –

We are currently down to the third box, and it is starting to fail. I am trying to get the second working again, to push back, at least in Europe. But it is tremendous work, even though the math says it can be done. Worse, the people in charge are creating an atmosphere where facts and education are viewed as childish distractions.

Policymaking has become anti-science, driven by primarily four interest groups who each don’t want facts to interfere with their flavor of ideology-religion. The lessons learned from the Enlightenment are increasingly becoming an obstacle. Information has become something dangerous, and yet, it is disseminated at a pace never seen before. Perhaps it is even therefore that it is seen as dangerous.

“Beware of he who would deny you access to information, for in his heart, he dreams himself your master.”

There are four key groups driving this development. Each contribute in their own way, but together, they make a perfect storm for closing down society.

As these come together, they create a perfect storm for creating policies that are not for the public, but against the public on behalf of very special interests. The laws thus enacted have no problems at all taking away all of our liberties, from the right to privacy and freedom of expression/opinion (copyright industry) to our right to walk freely in the street and even the very right to life (security profiteers). In this, it is necessary to create an environment that is downright hostile to facts and independent studies. This has already been done (again: copyright industry, “terrorism”).

Let’s just take the semi-political science of criminology as an example here. The evidence-based science of what happens when you arrange your laws, law enforcement, and sentencing in certain ways. There is a key concept called marginal deterrence saying that when somebody commits a crime, you want to make sure that they don’t escalate violence, and so, there is always a next step of harsher punishments to avoid.

For example, if you have the same penalties for robbery and murder, it is logical for a robber to kill every one of his victims, as it won’t make a difference if the robber is caught. Quite the opposite — you’d have one less witness and reduce your risk of getting caught. Therefore, you want a significantly higher penalty for murder than for robbery. This is an example of marginal deterrence.

Last night, the United States Senate ignored all such science and voted 86 to 13 that anybody could be imprisoned indefinitely, or even executed, without a trial or charges. 86 to 13! This is what I mean by the United States being already lost. For what happens when it doesn’t matter how much people try to adhere to laws, but can be thrown in jail and even executed anyway? When there’s not even a pretense of a rigged mock trial? I tweeted about that yesterday. I even referenced the Fourth Box.

Also, the wordspin has already started to apply this to ordinary dissenters. People who don’t agree with The Man. The indefinite detention and execution thing in the United States will only apply to “terrorists”, but at the same time, ordinary protesters in a rally were just labeled “low-level terrorists”. There’s no rocket science needed to see where this is going, even though a lot of people are understandably afflicted by normalcy bias — plain refusal to see the events right before their eyes. Like I said, the US is going to take a couple of very dark decades.

Let me illustrate the gravity of this situation. When these kinds of laws have been passed and a couple of people have been disappeared, if you see a couple of police coming for you, the logical thing to do is to simply kill them from a distance. There’s nothing worse coming for you from doing that, anyway, and it improves your chances of survival and liberty. And people will band up to help each other in doing exactly that — quickly. At that point, laws are irrelevant (even if there were rigged mock trials); street smartness determines if you literally live or die.

In Sweden, there was a similar example of normalcy bias a couple of years back, as privacy was being abolished in favor of general wiretapping. Everybody could and would be wiretapped in bulk without warrant, notice, suspicion of a crime, anything like that. As we were staging protest rallies and read the proposed law to passersby, word by word of the actual bill, they would not believe us. Just plain refused to believe that this was happening, they thought we were making it up and it was too unreal to actually verify. That was one of the most frustrating times of my political life so far. I’ll be returning to this in a later post.

But it illustrates another point. The key weapons here are ironically not those that propel lead, copper, or steel at high velocities, but cell phones. If you observe the younger generation — meaning the younger half of the population, generally — seeing a crime being committed, they all take out their cell phones, but not to call the police. They take out their cell phones to start recording, preferably with the actual recording happening somewhere else than in their phone (which is in danger of being destroyed due to the proximity of the event taking place).

Slim Amamou, the Pirate Party activist from Tunisia who served on the Tunisian Cabinet as Secretary of State, observed that all the activist photos from the Arab Spring always included other people photoing the same scene with their cellphones. So the fuel for that revolution did not just contain the fuel itself — each part of it also contained visible instructions on how to help spread documentation of other abuses.

There is a reason the nobility desperately wants control of the net. The same reason we need to fight for it.

I believe democracy must unconditionally be the path chosen as long as there is hope of liberty through democracy. But, alas, that path is closing — it is being closed by our elected officials, on behalf of special interest groups. Profits and fundamentalism. It is not closed yet, but many actors are working ferverently to shut it.

I am a white middle-aged male in Europe. A highly educated entrepreneur. Decorated as one of the world’s best thinkers, even. Shaking hands with presidents, members of cabinets, and secretaries of state internationally. I have absolutely nothing to fear from government as long as I just go about my way. Logically, I should be one of the last to realize that it may come to this.

This thought is not as chilling if it is wrong, as if it is right: maybe I am. Maybe many others have been thinking it, but not saying it. If so, a very large portion of the general population of the West have been watching the Arab Spring and mentally preparing for possibly having to do the same thing in their lifetimes.

Some people think that Europe in general (and Nordic countries in particular) is a shining beacon of hope here. I will illustrate in follow-up articles how there are politicians who appear to want nothing more than to follow the United States into darkness. But — importantly — Europe can still be saved. Activism here can still make an impact, as can political work, hard work on the streets. We can reverse this. Can. Can and must.

I do not want to go to the situation I describe in this article. Do Not. I want to throw all the world’s curses on the people who create this and force me to think in these ways. But if dragged into that situation after years of protest and hard work to go elsewhere, I will adapt to it, fight for liberty in the ways that I can, and help others organize to do so too. I have gone from preparing mentally to preparing in deed for the scaring and scarring possibility that things may get ugly, real ugly.

The gun and that target in the photo above, illustrating this article, is not a stock photo like 99% of the photos on this blog. That particular photo was taken on my desk, half a meter from where I’m sitting.