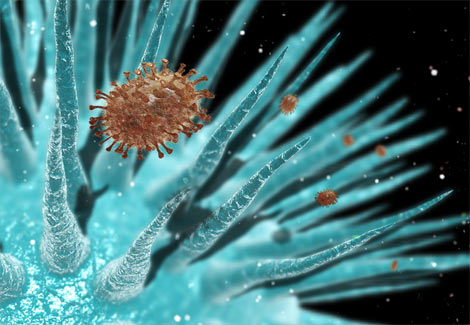 A new vaccine for influenza has hit the market, and it is the first ever to contain genetically-modified (GM) proteins derived from insect cells. According to reports, the U.S. Food and Drug Administration (FDA) recently approved the vaccine, known as Flublok, which contains recombinant DNA technology and an insect virus known as baculovirus that is purported to help facilitate the more rapid production of vaccines.

According to Flublok’s package insert, the vaccine is trivalent, which means it contains GM proteins from three different flu strains. The vaccine’s manufacturer, Protein Sciences Corporation (PSC), explains that Flublok is produced by extracting cells from the fall armyworm, a type of caterpillar, and genetically altering them to produce large amounts of hemagglutinin, a flu virus protein that enables the flu virus itself to enter the body quickly.

So rather than have to produce vaccines the “traditional” way using egg cultures, vaccine manufacturers will now have the ability to rapidly produce large batches of flu virus protein using GMOs, which is sure to increase profits for the vaccine industry. But it is also sure to lead to all sorts of serious side effects, including the deadly nerve disease Guillain-Barre Syndrome (GSB), which is listed on the shot as a potential side effect.

“If Guillain-Barre Syndrome (GBS) has occurred within six weeks of receipt of a prior influenza vaccine, the decision to give Flublock should be based on careful consideration of the potential benefits and risks,” explains a section of the vaccine’s literature entitled “Warnings and Precautions.” Other potential side effects include allergic reactions, respiratory infections, headaches, fatigue, altered immunocompetence, rhinorrhea, and myalgia.

According to clinical data provided by PSC in Flublok’s package insert, two study participants actually died during trials of the vaccine. But the company still insists Flublok is safe and effective, and that it is about 45 percent effective against all strains of influenza in circulation, rather than just one or two strains.

Back in November, the FDA also approved a new flu vaccine known as Flucelvax that is actually made using dog kidney cells. A product of pharmaceutical giant Novartis, Flucelvax also does away with the egg cultures, and can similarly be produced much more rapidly than traditional flu vaccines, which means vaccine companies can have it ready and waiting should the federal government declare a pandemic.

Like Flublok, Flucelvax was made possible because of a $1 billion, taxpayer-funded grant given by the U.S. Department of Health and Human Services (HHS) to the vaccine industry back in 2006 to develop new manufacturing methods for vaccines. The ultimate goal is to be able to quickly manufacture hundreds of millions of vaccines for rapid distribution.

Meanwhile, there are reportedly two other GMO flu vaccines currently under development. One of them, which is being produced by Novavax, will utilize “bits of genetic material grown in caterpillar cells called ‘virus-like particles’ that mimic a flu virus,” according to Reuters.