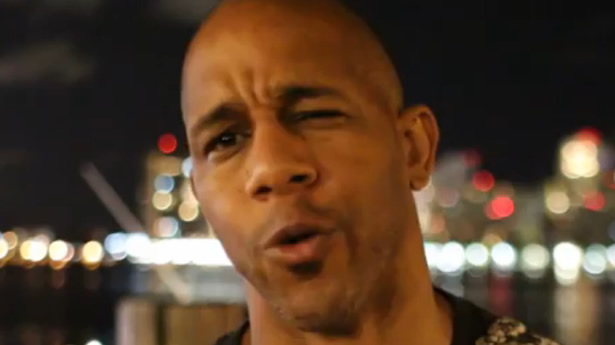 The police officer arrested for refusing to remove his “Anonymous” mask at an anti-Obamacare rally gave an interview to Red Pill Philosophy and WeAreChange in which he said that “there’s a war coming” and “it’s time to fight.”

Ericson Harrell wore the Guy Fawkes mask, he said, because it’s a “symbol of protest.”

“I always keep my mask in my truck, my cape in the truck, the flag in truck and everything,” he said. “So I put on the mask and the cape, grabbed the flag, and I stood on the corner.”

Eventually a female police officer confronted him, at which point he asserted “my right to free speech,” and tried to convince the officer that the anti-masking statute didn’t apply to him, because that statute “was not put into place for peaceful protests, not for figures just standing on the side of the road trying to express their first amendment rights.”

After her supervisor showed up, he was arrested for refusing to remove his mask or identify himself.

He stated that the officer and her supervisor thought he was part of a larger anti-Obamacare protest, but “in actual reality, I was alone at the time. I was a soldier of one.”

Harrell also claimed that he only announced himself as a police officer “after the fact, because I didn’t want to get any preferential treatment.”

The anti-masking statute, he correctly claimed, was put into place “sometime in the 1950s because of the Ku Klux Klan trying to intimidate a certain group of people — a certain race of people.” He declined to specify which “group” or “race” that was.

Harrell is currently on administrative leave, and his department will make a decision as to his permanent employment situation after the charges against him are dealt with.

Watch the complete interview with Ericson Harrell below.