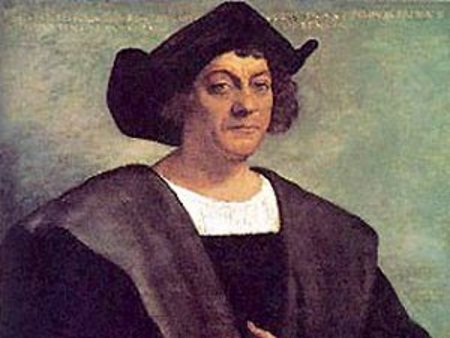 “What we committed in the Indies stands out among the most unpardonable offenses ever committed against God and mankind, and this trade [in Indian slaves] as one of the most unjust, evil, and cruel among them.” – Bartolomé de las Casas Christopher Columbus was not the first to discover the Americas, nor was he the first to realize that the earth is round. He was the first, however, in other exploits, namely genocide and the transatlantic slave trade. Doesn’t sound familiar? Read on.

The Afro-Phoenicians are described as having sailed from Egypt to the coast of Mexico as early as 750 B.C. Though Columbus may not have been the first to discover the Americas, his exploits there marked a turning-point in European thought and conquest. Five factors made this new “Age of Exploration” possible:

“Tomorrow morning before we depart, I intend to land and see what can be found in the neighborhood.” – Christopher Columbus In 1492, Columbus “discovered” the Americas when he landed in Haiti and several islands in the Caribbean. The Arawak Indians inhabited these islands, and at first Columbus described them as “very handsome,” and went into great detail about their formidable wooden boats that could hold 40-45 men. In little time, though, and after noticing their gold nose rings, he got to the point: “I was very attentive to them, and strove to learn if they had any gold.” In search of this gold, he sailed the next day around the island, ending with the ominous statement: “I could conquer the whole of them with fifty men and govern them as I pleased.” On this first voyage, Columbus captured 20-25 Arawak slaves, who he then transported back to Spain.

For the second voyage to Haiti the following year (1493), Ferdinand and Isabella gave him the resources needed to subdue the population. When he returned to Haiti, Columbus demanded food, gold, and cotton thread, and was increasingly met with resistance. This resistance gave him the opportunity he needed to declare war on the Arawaks. According to Bartolomé de Las Casas, who was there with the Spanish, Columbus chose “200 foot soldiers and 20 cavalry, with many crossbows and small cannon, lances, and swords, and a still more terrible weapon against the Indians, in addition to the horses: this was 20 hunting dogs, who were turned loose and immediately tore the Indians apart.”

The Spanish won the war, of course, for the Arawaks had only rudimentary weapons. As Columbus still could not find the gold he sought, and having to bring something back to Spain, he rounded up 1,000 Arawaks to be used as slaves. Five hundred of these he brought back to Spain, and the remaining 500 he gave to the Spanish then “governing” the island.

“These people are very unskilled in arms; with 50 men they could all be subjected and made to do all that one wished.” – Christopher Columbus Though now in control of the Arawak Indians and their island Haiti, Christopher Columbus still could not find the gold that he was sure was somewhere on the island. The Arawaks, I’m sure, were not very willing to tell him where it was. Therefore, he set up a “tribute system” which worked thus:

Every three months, each Haitian over 14 years of age would be required to pay Columbus with either 25 pounds in cotton or a large “hawk’s bell” of gold dust (a lot of gold dust.)

Once the slaves paid this, they would receive a metal token. This token was worn around their necks as a signal that they were home-free for another 3 months (during which time they saved up for their next token, of course.)

Those who did not pay had both of their hands chopped off.

“Gold is a treasure, and he who possesses it does all he wishes to in this world, and succeeds in helping souls into paradise.” – Christopher Columbus

Hispaniola – [get directions]is a major island in the Caribbean, [now] containing the two sovereign states of the Dominican Republic and Haiti

Due to the tribute system, the Arawaks were forced to work in the mines instead of growing food in their fields, which led to generalized malnutrition. According to a letter written by Pedro de Cordoba to King Ferdinand, “As a result of the sufferings and hard labor they endured, the Indians choose and have chosen suicide. The women, exhausted by labor, have shunned conception and childbirth…Many, when pregnant, have taken something to abort and have aborted. Others after delivery have killed their children with their own hands, so as not to leave them in such oppressive slavery.”

Thus, the crime of genocide began with our very own Christopher Columbus. He completely exterminated an entire race of 8,000,000 people –and that’s only counting one of the cultures he decimated. “Haiti under the Spanish is one of the primary instances of genocide in all human history.” – Dr. James W. Loewen

“After having dispatched a meal, I went ashore, and found no habitation save a single house, and that without an occupant; we had no doubt that the people had fled in terror at our approach, as the house was completely furnished.” – Christopher Columbus Slaves “Packed In Below Deck”

Columbus wasn’t just into subjugating and decimating; he was also interested in the sexual aspect of slavery. According to a letter written by Michele de Cuneo, before his first voyage had even reached Haiti in 1492, “Columbus was rewarding his lieutenants with native women to rape.” Columbus wrote in 1500: “A hundred castellanoes are as easily obtained for a woman as for a farm, and it is very general and there are plenty of dealers who go about looking for girls; those from nine to ten are now in demand.” This is not exactly the character of Christopher Columbus that was portrayed in public school.

Aside from sexual slavery, there existed, of course, the aspect of using slavery for profit. When there were no more Arawaks to mine his gold for him–for they no longer existed–Columbus systematically depleted the Bahamas of their peoples for this task. Tens of thousands of slaves from the Bahamas were transported to Haiti, leaving the islands behind deserted. Peter Martyr reported in 1516: “Packed in below deck, with hatchways closed to prevent their escape, so many slaves died on the trip that a ship without a compass, chart, or guide, but only following the trail of dead Indians who had been thrown from the ships could find its way from the Bahamas to Hispaniola.”

After the new batch of slaves died, Columbus depleted Puerto Rico, and then Cuba. When they had all succumbed, he turned his eyes to Africa, thus establishing the transatlantic slave trade and the concept of “race.” Through his exploits in Haiti, Columbus lead the way for other European nations to begin seeking wealth through domination, conquest, and slavery. In essence, Columbus changed the world, and we recognize this in one way or another by delineating history as being either pre- or post-Columbian.

“Columbus’ government was characterized by a form of tyranny. Even those who loved him had to admit the atrocities that had taken place. Now one can understand why he was sacked and we can see that there were good reasons for doing so. The monarchs wanted someone who did not give them problems. Columbus did not solve problems, he created them.” – Francisco de Bobadilla Help Spread The Word About Columbus

The second Monday of each October, The United States of America celebrates “Columbus Day” with a public holiday and parades. Grade school kids write about how wonderful he was, and high school students write reports proclaiming his brilliance and enduring courage. He is virtually made into a sort of God, carefully placed upon a pedestal of complete ignorance.

Many college students who take history classes, and many indigenous peoples, in contrast, opt to protest the holiday in respect for the countless nations decimated by Columbus. As George P. Horse Capture writes, “No sensible Indian person can celebrate the arrival of Columbus.” Nor, I should add, can any sensible person who knows anything of his history.

“The worshipful biographical vignettes of Columbus in our textbooks serve to indoctrinate students into a mindless endorsement of colonialism that is strikingly inappropriate in today’s post-colonial era.” – Dr. James W. Loewen