Global Banks Are The Financial Services Wing of The Drug Cartels 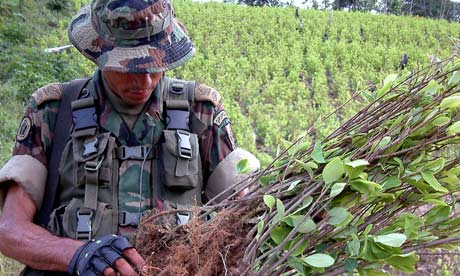 A Colombian soldier inspects the harvest of a 50-acre coca plantation: fines for laundering drugs money may seem huge, but banks pay them out of petty cash. Photograph: Efrain Patino/AP

Two months ago in Washington DC, a poor black man called Edward Dorsey Sr was convicted of peddling 5.5 grams of crack cocaine. Because he was charged before a recent relative amelioration in sentencing, he was given a mandatory 10 years in jail.

Last week, managers from Britain’s biggest bank, HSBC, lined up before the Senate’s permanent sub-committee on investigations – just across the Potomac river from the scene of Dorsey’s crime – to be asked questions such as: “It took three or four years to close a suspicious account. Is there any way that should be allowed to happen?”

The “suspicious account” was that of a “casa de cambio”, a currency exchange house operated in Mexico on behalf of the largest criminal syndicate in the world and one of the most savage, the Sinaloa drug-trafficking cartel. The dealings had been flagged up to HSBC bosses by an anti-money laundering officer, but to no avail – the dirty business continued. “No, senator,” came the reply from a bespectacled Brit called Paul Thurston, chief executive, retail banking and wealth management, HSBC Holdings plc.

The same casa de cambio, called Puebla, was known to be under investigation in another case involving the Wachovia bank during the time HSBC was entertaining its money. US authorities had seized $11m from Wachovia’s Miami office, on the way to securing the biggest settlement in banking history with Wachovia in March 2010, detailed in this newspaper last year.

Wachovia was fined $50m and made to surrender $110m in proven drug profits, but was shown to have inadequately monitored a staggering $376bn through the casa de cambio over four years, of which $10bn was in cash. The whistleblower in the case, an Englishman working as an anti-money laundering officer in the bank’s London office, Martin Woods, was disciplined for trying to alert his superiors, and won a settlement after bringing a claim for unfair dismissal.

No one from Wachovia went to jail – and, said Woods at the time of the settlement: “These are the proceeds of murder and misery in Mexico, and of drugs sold around the world. But no one goes to jail. What does the settlement do to fight the cartels? Nothing. It encourages the cartels and anyone who wants to make money by laundering their blood dollars.”

HSBC has been found to have handled $7bn in narco cash, “and this is the starter for 10”, Woods now says. “We’ll get the full picture over time. But what’s the sanction on these banks? What’s their risk? The cartels should renegotiate their charges with the banks. They’re being priced for a risk element that isn’t there.”

Wachovia was not the first, neither will HSBC be the last. Six years ago, a subsidiary of Barclays – Barclays Private Bank – was exposed as having been used to launder drug money from Colombia through five accounts linked to the infamous Medellín cartel. By an ironic twist, Barclays continued to entertain the funds after British police had become involved after a tip-off, from HSBC.

And the issue is wider than drug-money. It is about where banks, law enforcement officers and the regulators – and politics and society generally – want to draw the line between the criminal and supposed “legal” economies, if there is one.

Take the top-drawer bank to the elite and Her Majesty the Queen, Coutts, part of the bailed-out Royal Bank of Scotland. On 23 March, the UK Financial Services Authority issued a final notice to Coutts, fixing a penalty of £8.75m for breach of its money-laundering code.

The FSA reviewed 103 “high-risk customer files” and “identified deficiencies in 73 files”, showing “failure to conduct appropriate ongoing monitoring” over three years. In two cases, private bankers involved had “failed to identify serious criminal allegations against those customers”. Rory Tapner, chief executive of the wealth division of RBS said that “since concerns were first identified by the FSA, Coutts & Co has enhanced its client relationship management process”. The refrain was the same from HSBC last week, and every other bank after every other shameful revelation: we went awry, but we’ve fixed it.

Wouldn’t it be interesting, though, to know Coutts’s private view of Wachovia’s case – or, at least of people such as Woods who do root out criminal laundering?

As it happens, through a rare glimpse, we do. Last year, the Wachovia whistleblower was offered a job at Coutts. But the bank suddenly withdrew its job offer. An internal email sent by the interviewer to a director of Coutts’s wealth management programme explained the bank had “a very generic reason for our decision, citing the fact that we had become aware of an incident at Wachovia, one of Martin Woods’s previous employers, and that Coutts was keen to avoid any risk of reputational damage that might relate to the incident”.

The thought occurs to Woods, who is taking legal action against Coutts for mistreatment of a whistleblower, that he was too tenacious at Wachovia. Coutts declined to comment.

No one at Coutts was called to account for the FSA’s alarming findings. No one was sanctioned under criminal law last month when the ING bank was fined $619m for illegally moving billions of dollars into the US banking system, in breach of sanctions – as HSBC has done with money from North Korea and Iran. Neither were they in 2009, when Lloyds TSB – 43% owned by the British taxpayer – was fined $350m for whitewashing Iranian money into the US. The fines seem huge to us, but banks pay them from petty cash.

If there is a prosecution, it is always “deferred”, as with Wachovia, and a Californian bank called Sigue used by HSBC to receive the Mexican drug money. Be good for a year, and we’ll forget about it. Since when did the likes of Edward Dorsey of Washington enjoy that kind of leniency?

A foremost trainer of anti-money laundering officers in the US is Robert Mazur, who infiltrated the Medellín cartel during the prosecution and collapse of the BCCI bank in 1991, and who tells the Observer that “the only thing that will make the banks properly vigilant to what is happening is when they hear the rattle of handcuffs in the boardroom”.

It remains to be seen whether HSBC’s barons will, like Wachovia’s, avoid Dorsey’s fate.

“People don’t like to ask how close the banker’s finger is to the trigger of the killer’s gun,” says Woods.

But in this newspaper – when we revealed the original “cease and desist” order against HSBC – the former head of the UN Office on Drugs and Crime, Antonio Maria Costa, posited that four pillars of the international banking system are: drug-money laundering, sanctions busting, tax evasion and arms trafficking.

The response of politicians is to cower from any serious legal assault on this reality, for the simple reasons that the money is too big (plus consultancies to be had after leaving office). The British government recruits a former chairman of HSBC as trade secretary just as the drug-laundering scandal breaks.

Herein, along with Dylan’s dictum, lies the problem. We don’t think of those banking barons as the financial services wing of the Sinaloa cartel.

The stark truth is that the cartels’ best friends are those people in pin-stripes who, after a rap on the knuckles, return to their golf in Connecticut and drinks parties in Holland Park.

The notion of any dichotomy between the global criminal economy and the “legal” one is fantasy. Worse, it is a lie. They are seamless, mutually interdependent – one and the same.