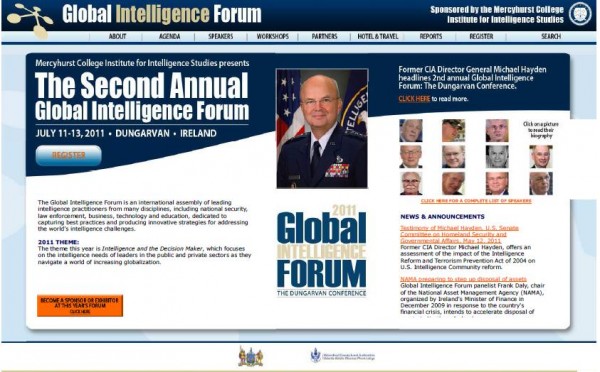 According to the conference agenda (courtesy of cryptome.org) the theme this year will be Intelligence and the Decision Maker — focusing on the intelligence needs of leaders in the public and private sectors as they navigate a world of increasing globalisation:

Also speaking will be some of the world’s top (though mostly retired) spooks, from agencies as far reaching as the CIA, the US Army Intelligence & Security Command, the FBI, the US Department of Homeland Security, EUROPOL, the Garda Inspectorate and … um, John Bruton, Chair of the International Financial Services Centre, Ireland (who is obviously not a spook).

Which is strange company for Ireland’s bad bank.

As to why Daly and his fellow Irish financial colleagues will be attending a conference full of spooks in the first place, there’s been a Dáil debate on the matter already.

To ask the Minister for Justice and Equality if he will provide details of attendance of the Secretary General of his Department at the forthcoming Global Intelligence Forum in Dungarvan, County Waterford in July; the nature of this conference; and if he will make a statement on the matter

To which the honourable Alan Shatter, Minister of the Department of Justice, Equality and Defence, replied as follows:

The Global Intelligence Forum is due to take place in Dungarvan from 11 to 13 July. I understand the forum which is organised by Mercyhurst College, in partnership with the Waterford local authorities – the Waterford local authorities have not yet been taken over by the CIA – is one of a number of outreach initiatives on which the college has embarked to capture best practices in the intelligence community. The annual forum focuses on key intelligence issues from a global perspective and will include speakers and participants from a number of countries in the areas of business, national security, history, law enforcement and government. I am satisfied that in the circumstances it is entirely appropriate for my Department to participate in the forum.

A type of “nothing to see here, please move along” comment.

Though, Richard Boyd Barrett was seemingly unsatisfied and persisted.

Here’s the rest of the exchange (H/T Lorcan):

Richard Boyd Barrett (Dún Laoghaire, People Before Profit Alliance) :
I am just stating that for the record, given the earlier unjustified comment. What is the reason senior figures both in the Garda and from the Department of Justice and Equality and the Department of Defence are attending this conference with former directors of the CIA, former directors of military intelligence in the United States army and former senior figures from the FBI? Bizarrely, the intelligence conference is also being attended by the director of Treasury Holdings, one of the developers that helped bankrupt this country, and Mr. Frank Daly, the chairman of the National Asset Management Agency. Is it appropriate for high level officials from various Departments to attend such a spooks conference with spooks from the CIA, FBI and so forth, as well as developers who have played such a malign role in our economic fortunes? Is it in line with this country’s tradition of military neutrality to be involved in such a conference?

Alan Shatter (Minister, Department of Justice, Equality and Defence; Dublin South, Fine Gael):
I would not wish to unduly upset the Deputy but it might not be a surprise to him to hear that “Spooks” is my favourite television programme. It is a great pity it is not on television at present. It should also not surprise the Deputy that there is substantial co-operation between us and the United States in dealing with organised crime and international terrorism. There is also substantial co-operation between us and our European Union partners and the British Government in addressing these issues. It is of great value and importance to this country that in counteracting a broad range of activities by organised criminals, be it drug importation or human trafficking, there is capacity to exchange intelligence, interact with each other and to learn best practice from each other. Intelligence is a key aspect in all aspects of policing and national security, from day-to-day operational policing to the sophistication and complexity of investigations into organised crime. Good intelligence gathering and co-operation between democratic countries in acquiring intelligence are crucial in the engagement of a police force. It is important that my Department is fully informed of the best practices to apply in dealing with matters in the justice area. My Department, which has a primary strategic role in supporting the Garda Síochána in tackling crime and promoting a peaceful society, has a very substantial interest in participating in this conference and in consideration of issues related to intelligence gathering and analysis in the broadest sense, both from a practical and academic perspective. The Secretary General of the Department received and accepted an invitation to speak at the conference, which is focused on best practices in the intelligence community. I presume the Deputy would not wish this country to operate as a solitary island in a vacuum and never engage with other countries in dealing with international crime and terrorism and issues in which we have an interest as a democratic society to protect both the State and the citizens of the State from those engaged in criminality.

Richard Boyd Barrett (Dún Laoghaire, People Before Profit Alliance):
Of course some of the issues the Minister mentioned are legitimate matters on which we must co-operate with other countries. However, there is a little more than that to the CIA. Does it not concern the Minister that the CIA is involved in illegal kidnapping, so-called renditions and has been involved in all sorts of manipulations in places such as the Middle East? It might well be involved in the activities of the Saudi regime, with which the US Government is so closely associated, in trying to crush a democratic movement in Bahrain. Are these the intelligence services we should mix with given that history? Why is there a requirement on delegates attending this conference not to write about their attendance or what takes place at the conference? There are to be no blogs about it and journalists are not allowed to attend. None of the content of the conference is allowed to emerge from it. Can the Minister explain why that is the case?

Alan Shatter (Minister, Department of Justice, Equality and Defence; Dublin South, Fine Gael) :
The Deputy is yet again revealing his eccentric and odd views of this world. He is overwhelmed personally with conspiracy theories and, despite denying it, an anti-US bias. He apparently loves the American people but does not want us to engage with or talk to them, which is an odd way of viewing the world. This is the second year that Mercyhurst College, which is based in Pennsylvania, has organised an academic outreach event in Dungarvan. It is a great benefit to Dungarvan that such events are organised. The event is organised in partnership with the Waterford local authorities. There is nothing covert or underhand about it. Indeed, if the Deputy wishes to find more information about it, he should look at the Mercyhurst College website at www.mercyhurst.edu

Which still doesn’t quite explain what Nama is doing there.

So it makes us wonder. What do you get when you put a bunch of spooks, a bad bank and a financial services head together in one room in Ireland?

Is it possibly the plot for a really rubbish James Bond film (more than likely featuring Spectre, including their unbelievably apt logo)?